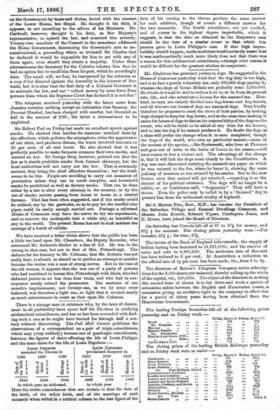 We have received a letter which shows that -the public

has been .a little too hard upon Mr. Chambers, the Deputy Recorder, who sentenced Mr. Sothern's libeller to a fine of 501. He was in the wrong in that case, but not in that of Mrs. Pittendreigh. The defence for his leniency to Mr. Coleman, that Mr. Sothern was.not really hurt, is absurd, as absurd as to pardon an attempt at murder because the victim was a man of strong nerves. But in the case of the old woman, it appears that she was one of a party of persons who had combined to harass Mrs. Pittendreigh with libels, who had /defeated justice in no less than four trials, and who had in con- .sequence nearly ruined the prosecutor. The sentence of one month's imprisonment, not twenty-one, as we by some error believed, was therefore a light one, so light that it created nearly as much astonishment in court as that upon Mr. Coleman.