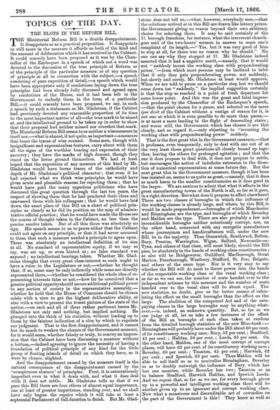 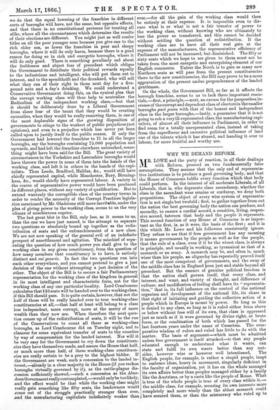 THE BLOTS IN THE REFORM BILL.

The last great blot in the Bill, only less, as it seems to us, than the one we have just named, is the attempt to separate .two questions so absolutely bound up together as the redis- tribution of seats and the enfranchisement of a new class. We are not now speaking of the general evil of an indefinite prospect of unsettlement and agitation. The mischief of sepa- rating the question of how much power you shall give to the working class in any given constituency, from the question of .how many members that constituency is to have, is entirely distinct and sui generic. In fact the two questions run into each other everywhere, and you cannot pretend to give a just decision of the one without attempting a just decision of the other. The object of the Bill is to secure a fair Parliamentary :representation for the working class of the kingdom in general in its most intelligent and characteristic form, not for the working class of any one particular locality. Lord Cranbourne calculates that 133 seats will be handed over to the workingclass, if this Bill should pass. It is quite certain, however, that not the _half of those will be really handed over to true working-class constituencies at all, —that half at least will belong to a class less independent, more corrupt, more at the mercy of mere -wealth than they now are. When therefore the next ques- tion comes up of the redistribution of seats, it will be the cue -of the Conservatives to count all these as working-class boroughs, as Lord Cranbourne did on Tuesday night, and to -clamour for some equivalent transfer of seats to the counties by way of compensation for the landed interest. Nor will it be very easy for the Government to cry down the constituen- cies they have themselves made, and assure the House that half, or much more than half, of these working-class constituen- cies are really certain to be a prey to the highest bidder. If .the Government are weak, such a concession to the landed in- lerest,—alieady in a clear majority in the House (if you reckon boroughs -virtually governed by it), as the cattle-plague dis- cussion sufficiently showed,—such a concession as the Aber- deen Government really contemplated,—would only be too likely, And the effect would be that while the working class might really gain something like fifty seats, the landowners would come out of the struggle practically stronger than ever, and the manufacturing capitalists indefinitely weaker than ever,—for all the gain of the working class would then be entirely at their expense. It, is impossible even to dis- cuss what is or what is not a fair transfer of power to the working class, without knowing who are ultimately to lose the power so transferred, and this cannot be decided without settling the question of redistribution. If the working class are to have all their real gain at the expense of the manufacturers, the representative efficiency of Parliament will not be increased, but diminished. The fifty or sixty seats which we hope to see given to them must not be taken from the most energetic and enterprising element of our English commerce. Unless the North is to gain as many new Northern seats as will pass from the present constituencies there to the new constituencies, the Bill may prove to be a mere aggravation of the present undue preponderance of the landed gentlemen. On the whole, the Government Bill, so far as it affects the borough franchise, seems to us to lack three important essen- tials,—first, a principle,—next, an excuse for the purposeless in- crease of the corrupt and dependent class of electors in the smaller boroughs pari passu with that of the honest and independent class in the larger boroughs,—lastly, a guarantee that it is not going to rob a very ill-represented class, the manufacturing capi- talists, of almost all their influence in Parliament, in order to find room for a totally unrepresented class, instead of taking from the superfluous and excessive political influence of land one of the talents which it has abused, and handing it over to labour, for more fruitful and worthy use.