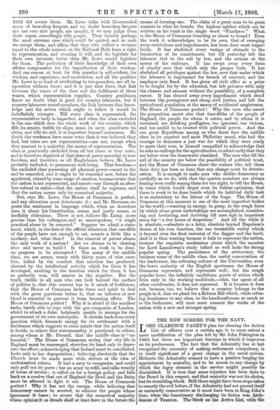 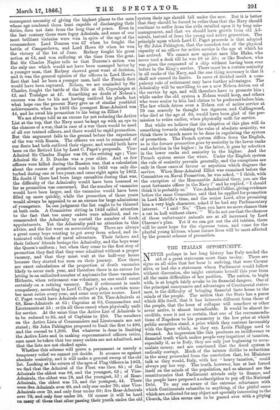 THE NEW SCHEME FOR THE NAVY.

LORD CLARENCE PAGET'S plan for clearing the Active-. List of officers over a certain age, is to some extent a mere modification of the plan left by Sir John Pakington in 1860, but there are important features in which it improves• on its predecessor. The fact that the Admiralty has at last- recognized the necessity of making retirement compulsory, is in itself significant of a great change in the naval system. Hitherto the Admiralty seemed to have a positive longing for- appointment by seniority, and to be averse to any change by which the fogey element in the service might possibly be. diminished. It is true that some injustice has been done to- the Board in this respect, and that seniority was not its choice, but its stumbling-block. Still there might have been steps taken. to remedy the evil before, if the Admiralty had not proved itself as eminently conservative as it must have been in King John's. time, when the functionary discharging its duties was- Arch- deacon of Taunton. The block on the Active List, with the- consequent necessity of giving the highest places to the men whose age rendered. them least. capable of discharging their duties, does not. date from the long time of peace. Even in the last century there:w-ere fogey. Admirals, and some of our most brilliant victories were won in spite of the age of the commanders. Lord Duncan was 67 when he fought the battle. of Camperdown,. and Lord Howe 69 when he won the victory of the 1st of June. Rodney fought his great action at 64, and was suffering at the time from the gout. But Sir. Charles Napier tells us that Duncan's action was the only one which would not have been managed better by a younger man, that Rodney showed great want of decision, and it eves the general opinion of the officers in Lord Howe's fleet. that had he been a younger man, half the French fleet would have been captured. Nelson, we are reminded by Sir Merles, fought the battle of the Nile at 39, Copenhagen at 42, and Trafalgar at 47. Something no doubt of Nelson's success was due to his not. having outlived his pluck, but what hope can the present. Navy give u,s of similar youthful achievements, when in 1863 the youngest Rear-Admiral was 44, and he owed his promotion to his being an Elliot ?

We are always told as an excuse for not reducing the Active List at the top, that the Navy must be kept up with an eye to the chances of .a war, that in case of a war there would be need of all our trained officers, and there would be rapid promotion. But this argument falls to the ground before the experience of the war with Russia. The officers we sent. in command of our fleets had both.outlived. their vigour, and would both have been on the Retired List by -Lord C..Paget's proposals. Vice- Admiral Sir Charles Napier was 68, the.retiring age ; Vice- Admiral Sir J. D. Dundas was a year older. And so few officers were killed during the Russian war, that a calculation about the course of promotion made in 1853 was only dis- turbed during one or two years, and came right again by 1862. No doubt.if there had been large casualties. during that war, the difficulty of the Admiralty would have been lessened so far as promotion was concerned. But the number of vacancies would have been larger, and the vacancies would have been ,filled up . more quickly, while the promotion of those years would. always be appealed to as an,excuse: for large admissions of In, our, judgment the. list ought to: be thinned at both ends. A Committee sitting in 1848 called attention to the fact that. too many cadets were. admitted, and re- commended the Admiralty to curtail the number of, fresh appointments. Yet the Admiralty paid no attention to this advice, and the list went on accumulating. There are always a great many boys wanting to get away from school, and in- toxicated with books of naval adventure. Their fathers and their fathers' friends besiege the Admiralty, and the boys wear the Queen's uniform ; but when they come to the first step of promotion. they find that they were admitted without a proper vacancy, and that they must wait at the half-way house because they started too soon on their journey. Now there are exact calculations of the proportion of death vacancies likely to occur each year, and therefore there is no excuse for letting in an unlimited number of aspirants for those vacancies. Hitherto, when retirement was voluntary, no one could count certainly on a retiring vacancy. But if retirement is made compulsory, according to Lord C. Paget's plan, a certain num- ber must retire every year, and some may retire. sooner. Lord 0. Paget would have Admirals retire at 70, Vice-Admirals at 68, Rear-Admirals at 65 ; Captain% at 60, Commanders and .Lieutenants-at 55 ; or (in all these cases) when physically unfit for service. At .the same time the Active List of Admirals is to be reduced to 85, and of Captains to 250. The numbers on the Active Lists of Commanders and Lieutenants are not stated.; Sir John Pakington proposed. to limit the first to 400, .and. the second to 1,200. But whatever is done in limiting the.Active Lists and in making superannuated officers retire, care must be taken that too many cadets are not admitted, and that the lists are not choked again.

Whether this scheme will prove a permanent or merely a temporary relief we cannot yet decide. It. secures us against absolute seniority, and it. will make a general sweep of the old list. Looking at the return of the ages of Flag Officers in 1863, we find that the Admiral of the Fleet was then 85 ; of the Admirals, the oldest was 88, and the youngest, 69.; of Vice- Admirals, the oldest was 78, and the youngest, 57 ; of Rear- Admirals, the oldest was 73, and the youngest, 44. There were five Admirals over. 80, and only one under 70; nine Vice- Admirals. over 7,0, and only four under 60; five Rear-Admirals over 70, and only four under 50. Of course it will. be hard on. many of. these: that after passing their youth under. the. old system their age should fall under the new. But it is better that they should be forced to retire than that the Navy should continue to suffer from the evils entailed upon it by long mis- management, and that we should have growls from old Ad- mirals, instead of from the young and active generation. The principle upon which Lord C. Paget proceeds is that adopted by Sir John Pakington, that the soundest test of the physical capacity of an officer for active service is the age at which he has arrived. We cannot now appoint men like Blake, who never trod a deck till he was 40 or 50 ; or like Benbow, who was given the command of a ship without having been ever before in the fling's service. There must be a certain seniority in all ranks of the Navy, and the one thing necessary is that it shall not exceed its limits. In cases of decided merit a come pulsory rule of retirement may have further advantages. The Admiralty will be unwilling to see a new Nelson driven out of the service by age, and will therefore have to promote him ; while under the old system a Nelson would keep, and others who were 'senior to him had claims to be preferred before him. The law which drives even a Nelson out of active service at 70 can scarcely be thought too rigorous, and. Collingwood, who died at the age of 60, would have been glad of the per- mission to retire earlier, when physically unfit for service.

But while we believe that the adoption of this plan will do something towards relaxing the rules of absolute seniority, we think there is much more to be done in regulating the system of promotion. The French system differs from the English, as in the former promotion goes by seniority in the lower ranks and selection in the. higher ; in the latter, it goes by selection in the lower ranks and seniority in the higher. And the French system seems the wiser. Under the English system the rule of seniority prevails generally, and the exceptions are only in those cases of favour or nepotism which disgrace the service. When Rear-Admiral Elliot was examined before the Committee on Naval Promotion, he was asked, " I think, with the exception of the Honourable Admiral Grey, you are the most fortunate officer in the Navy ?" and he replied, " I should think it is probably so." Vice-Admiral Collier, giving evidence before the same Committee, said that he applied for promotion in Lord Melville's time, and the senior Lord, after promising him a very high character, asked if he had any Parliamentary interest. " I said No.' Then you have no more chance than a cat in hell without claws.' " We do not sea that the chances of these unfortunate animals are at all increased by Lord Clarence's plan. Yet if we can get out the old tabbies, there will be more hope for the vigorous toms, and some for the playful young kittens, whose future lives will be mostaffected by the present scheme of promotion.