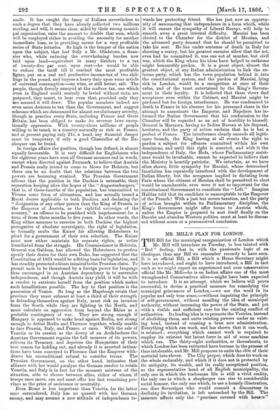 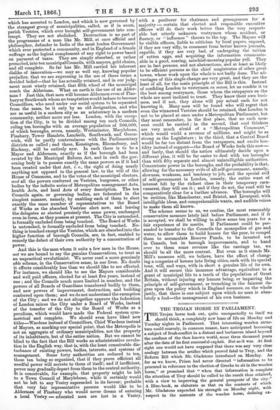 THE Bill for the municipal reorganization of London which Mr. Mill will introduce on Tuesday, is less tainted with " Red " feeling, that is, with the passionate logic of an ideologue, than any Bill we remember recently to have seen. It is an official Bill, a Bill which a Home Secretary might have introduced, and ought to have introduced, a Bill in fact such as we might expect an experienced and over conservative official like Mr. Mill—he is on Indian affairs one of the most wrongheaded Conservatives alive—might have been expected to introduce. It is an attempt, which we believe will prove successful, to devise a practical measure for remedying the municipal grievances of London, we use the word in its popular and only true sense,—without impairing the principle of self-government, without assailing the idea of municipal authority, without increasing the power of the State, and yet with a visible and sufficient cure for the existing conflict of authorities. Its leading idea is to promote the Vestries, instead of abolishing them, and unite existing powers under an exist- ing head, instead of creating a bran new administration. Everything which can work, and has shown that it can work, is retained ; everything which cannot work is required to employ its existent but latent force in aid of some machine which can. The thirty-eight authorities, or thereabouts, to which London has been entrusted have become in the process of time intolerable, and Mr. Mill proposes to unite the elite of their material into eleven. The City proper, which does its work on the whole endurably, and which if it does not is protected by its antiquity, its wealth, and its really exceptional position, as the representative head of all English municipality, the only one in which the tradesman life is still a vivid reality, the only one in which a shopkeeper can rise to considerable social honour, the only one which, to use a homely illustration, can dine Sovereigns who would commit a discourtesy in declining its invitation, is left untouched by the Bill. The measure affects only the " province covered with holism " which has accreted to London, and which is now governed by the strangest group of municipalities, called, as if in scorn, parish Vestries, which ever brought self-government into con- tempt. They are not abolished. Destruction is no part of the programme of a man like Mr.• Mill, at once official and philosopher, defender in India of the most leaden Government which ever protected a community, and in England of a female suffrage as the logical complement of any right to power based on payment of taxes. They are simply absorbed, or rather promoted, into ten municipal Councils, with mayors, gold chains, and all complete. So far has Mr. Mill carried his inherent dislike of innovation—we may as well say, knowing popular prejudice, that we are expressing in the use of these terms a decided belief—that he has actually retained, and in our judg- ment most wisely retained, that fifth wheel of the municipal coach the Alderman. What on earth is the use of an Alder- man ? Just this, that men will become Aldermen even of Fins- buryor Southwark whom no temptation would induce to become Councillors, who need under our social system to be separated from the mass, be it only by an old designation, and who are as useful in a modern city as an aristocracy in a modern community, neither more nor less. London, with the excep- tion of the City, is to be divided among ten such Councils, ruling ten boroughs with an average population of 300,000, of which boroughs, seven, namely, Westminster, Marylebone, Finsbury, Tower Hamlets, Lambeth, Southwark, and Green- wich, will be partly conterminous with the Parliamentary districts so called ; and three, Kensington, Bloomsbury, and Hackney, will be entirely new. In each there is to be a Mayor and Aldermen, exactly as if the borough had been created by the Municipal Reform Act, and in each the gov- erning body is to possess exactly the same powers as if it had been created under that Act, i. e., the right of doing nearly anything not opposed to the general law, to the will of the House of Commons, and to the votes of the municipal electors, and all the powers conferred on Vestries, burgesses, or other bodies by the infinite series of Metropolitan management Acts, health Acts, and local Acts of every description. The ten Councils again, or governing bodies, are federated in the simplest manner, namely, by enabling each of them to elect exactly the same number of representatives to the Board of Works as the absorbed Vestries elect now, and leaving the delegates so elected precisely the same power, unchanged even in form, as they possess at present. The City is untouched, is formally excluded from being touched. The Board of Works is untouched, is formally excluded from being touched. No- thing is touched except the Vestries, which are absorbed into the higher function of borough Councils, are, in fact, enabled to remedy the defect of their own authority by a concentration of power.

And this is the man whom it suits a few men in the House, not we are bound to say the genuine Conservatives, to treat as an unpractical revolutionist. We never read a more genuinely able scheme, in the Conservative sense, in our lives. No doubt it effects considerably less than we should like to see effected. For instance, we should like to see the Mayors considerable and well paid officers, elected for at least five years, instead of one ; and the Councils much more limited in number, and the powers of all Boards of Guardians transferred bodily to them, and new powers of improvement, destruction, and building conferred upon them; and we do not understand the exemption of the City ; and we do not altogether approve the federation of London minus the City under a Board of Works, instead of the transfer of the. City to the Board of Works as a peculium, which would have made the Federal system sym- metrical and complete. We should even have liked new titles—Wardens instead of Councillors, Chief Wardens instead of Mayors, as marking our special point, that the Metropolis is not an aggregate of ordinary municipalities, not the property of its inhabitants, but of the entire nation. But we cannot be blind to the fact that the Bill works an administrative revolu- tion in the English way, that is, with the least conceivable dis- turbance of existing powers, bodies, interests, and systems of management. Some forty authorities are reduced to ten, those ten being so organized, that if they prove efficient all needful power will accrete to them of itself ; and if inefficient, power may graduallydepart from them to the central authority. It is conceivable, for example, that property might be left to a Town Council of Marylebone, while it certainly would not be left to any Vestry superseded in its favour; probable that very fair representative persons would like to be Aldermen of Finsbury who would never dream of entering a local Vestry — educated men are lost in a Vestry, with a poulterer for chairman and greengrocers for a majority certain that elected and responsible executive officers will do their work better than the • very respect- able but utterly unknown vestrymen whom accident, or fluency, or " influence " throws to the top.. The Mayors will be visible officers, liable to criticism by local papers, exposed, if they are very silly, to comment from better known journals, capable, if they are very bad, of undergoing the tuition of rotten eggs, and acquiring the information communic- able in a good, roaring, mischief-meaning popular yell. They are in fact persons, and not abstractions, and at least as likely to be efficient persons as the chief magistrates of other great towns, whose work upon the whole is not badly done. The ad- vantages of this single change are very great, and they are the least of all, for the main principle of the Bill is this. Instead_ of confiding London to vestrymen en masse, let us confide it to the best among vestrymen, those whom the ratepayers on the whole are most inclined to trust. They know their own busi- ness, and if not, they alone will pay actual cash for not knowing it Many men will be found who will regret that even the winnowed Vestries should be retained, that London is not to be placed at once under a Metropolitan Parliament, but they must remember, in the first place, that no such mea- sure could be carried ; in the second, that cool thinkers are very much afraid of a " Metropolitan Commune," which would wield a revenue of millions, and might be as strong as the Legislature ; in the third, that a Central Board would be far too distant from the ratepayers, and excite hos- tility instead of support—the Board of Works feels this now— and lastly, that should the nation ultimately decide upon a, different plan, it will be far easier to deal with ten boroughs- than with fifty separate and almost unintelligible authorities.

Concentrate power in the boroughs, and the probability is that, allowing for the necessary evils of all self-government, namely, slowness, weakness, and tendency to job, and the special evil of self-government in London, namely, the entire want of interest felt by the richest class in their temporary cara- vanserai, they will use it ; and if they do not, the road will be comparatively clear for a further advance. The boroughs will be entities, like Manchester, and Bristol, and Liverpool, with intelligible ideas, and comprehensible wants, and audible voices to make them all known.

The scheme seems to us, we confess, the most reasonably conservative measure lately laid before Parliament, and if it is accepted, we shall be willing to allow some ten years for a fair experience of its merits. If Parliament could be per- suaded to transfer to the Councils the monopolies of gas and water, to allow them to build houses for the poor, to compel them to accumulate Reserve Funds, to be invested not in Consols, but in borough improvements, and to hand over to them some revenue like the carriage tax, we should be all the more content. But even as it stands Mr.

Mill's measure will, we believe, have the effect of chang- ing a congeries of houses into living cities, each with its special tone, will, and ways, with in short a genuine life of its own. And it will secure this immense advantage, equivalent to a grant of municipal life to a tenth of the population of Great Britain, without injuring any human being, or impairing the principle of self-government, or trenching in the faintest de- gree upon the policy which in England assumes, on the whole justly, that there is one subject upon which no man is abso- lutely a fool—the management of his own business.