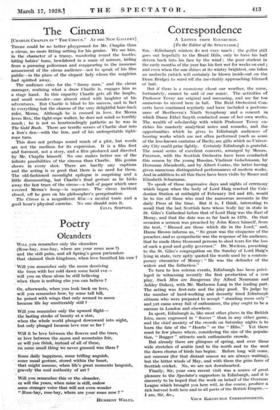 [CHARLIE CHAPLIN ix" THE CIRCUS." AT THE NEW GALLERY] THERE could be no better-playground for Mr. Chaplin than a circus, no more fitting setting for- his genius. We see him, in the character of a tramp, wandering round the booths; biting babies' buns, bewildered in 'a maze of Mirrors, hiding from a pursuing policeman and reappearing to the immense amusement of the circus audiendenot to speak of his film public—in the place of the elegant lady wham the magician had spirited away.

The audience cries for the "funny man," and the circus manager, realizing what a draw Charlie is, engages him as a stage hand. In this capacity Charlie gets all the laughs, and small wonder—one almost cried with laughter at his adventures. But Charlie is blind to his Suecess, and in 'faet to-everything but the charms of the 'very delightful bire-back rider, Meina. Although he is crossed_ in love, for .Mernit loves Rex, the tight-rope walker, he does not mind so terribly much ; he is not so heartrendingly. pathetic as he was in The Gold Rush. There are terrific scenes of Charlie shut into a lion's den—with the lion, and of his unforgettable tight: rope turn.

This dbes not perhaps Sound Mach of a plot, but words are not the medium for' its expression. It is. a film first. and foremoit. not a story, and a Min .produced and directed by Mr. Chaplin himself. No one makes better use of the infinite possibilities 'of the cinema than Charlie. His genius show S in -every shat. There are hardly any captions and the acting is so good that there is no need for them. The Old-fashioned "Incionlight epilogue is surprising and a little disconcerting, but Charlie's final gesture' as he kicks away the last trace Of. the circus—a ball of paper which- once covered 'Metna's supreme. The circus incident closed,' off -he goes on his philosopher's peregrination.

The Circus is a magnificent film—a mental tonic and a gota hour's physical exercise. No one Should miss it