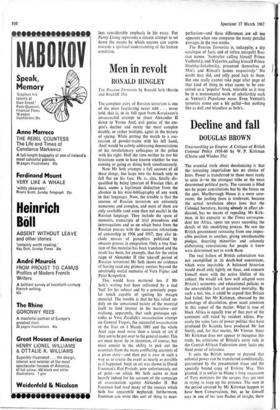 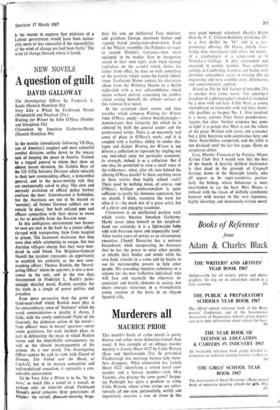 Unscrambling an Empire: A Critique of British Colonial Policy 1956-66

The essential truth about decolonising is that the retreating imperialism has no choice of heirs. Power is transferred to those most ready to seize it—to the strongest tribe or the most determined political party. The vacuum is filled not by paper constitutions but by the forces on the spot. Marlborough House is a mere ante- room; the jostling there is irrelevant, because the actual revolution obeys laws that the Colonial Secretary, having already in effect ab- dicated, has no means of repealing. Mr Kirk- man, in his capacity as the Times correspon- dent for Africa, spent ten years recording the details of this unedifying process. He saw the British government retreating from one impos- sible position to another, giving unredeemable pledges, deserting minorities and solemnly elaborating constitutions for people it knew were determined not to work them.

The real failure of British colonialism was not exemplified in its death-bed contortions, which were inevitable. A balanced historian would dwell only lightly on these, and concern himself more with the active lifeline of his subject. He would ask how well adapted were Britain's economic and educational policies to the unavoidable fact of parental mortality. By such a test, too, it could be argued that Britain had failed; but Mr Kirkman, obsessed by the pathology of dissolution, gives scant attention to this aspect of the matter. What is true of black Africa is equally true of that part of the continent still ruled by resident whites. Pre- cisely the same laws of power politics that have produced Dr Kaunda have produced Mr Ian Smith, and, for that matter, Mr Vorster. Since Mr Kirkman does not appear to recognise this truth, his criticisms of Britain's sorry role in the Central African Federation story lacks any fixed point of reference.

It suits the British temper to pretend that colonial power can be transferred conditionally, guaranteed by the presentation mace and the specially bound copy of Erskine May. This granted, it is unfair to blame a long succession of Tory ministers for the scrapes they got into in trying to keep up the pretence. The men in the period covered by Mr Kirkman happen to have been Conservatives, but, as he himself says in one of his rare flashes of insight, there

is 'no reason to suppose that ministers of a Labour government would have been notice- ably more or less successful if the reponsibility of the wind of change era had been theirs.' The wind of change bloweth where it listeth.