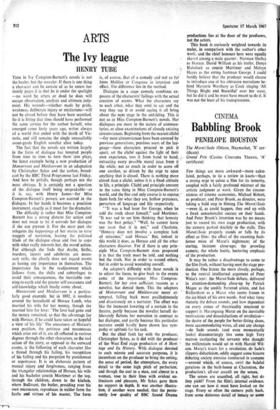 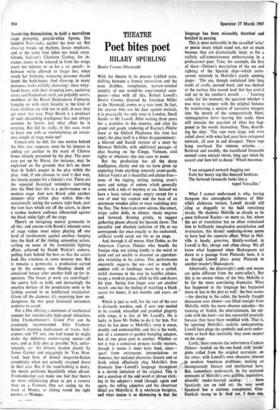 Few things are more awkward—more calcu- lated, perhaps, to tie a review in knots—than a strong urge to salute a film for its temerity, coupled with a fairly profound mistrust of the artistic judgment at work. Given the circum-

stances of cinema economics, Michael Birkett, as producer, and Peter Brook, as director, were taking a bold step in filming The MaratlSade —even if, as could happen, they end up with a freak sensationalist success on their hands. And Peter Brook's intention was by no means just to record his own stage production, with the camera parked docilely in the stalls. This Marat Sade properly stands or falls by its effect as film: the effect of the steaming bath- house mists of Marat's nightmare; of the staring, insistent close-ups; the prowling camera; the whole hectic, hectoring emphasis of the production.

It may be rather a disadvantage to come to the film fresh, without having seen the stage pro- duction. One listens the more closely, perhaps, to the central intellectual argument of Peter Weiss's text: the Marat-Sade debate, delivered in attention-demanding close-up by Patrick Magee as the seedily battered aristo, and Ian Richardson as a Marat who seems frozen in the ice-block of his own words. And what tinny rhetoric the debate sounds, and how dependent on every ounce of theatricality mustered to support it. Haranguing Marat on the inevitable motivations and dissatisfactions of revolution— the desire of the people for better-fitting shoes, more accommodating wives, all and any change —de Sade sounds (and even momentarily looks) disconcertingly like some high Tory matron castigating the servants who thought the millennium would set in with Harold Wil- son. Marat's tracts for a revolution, de Sade's slippery didacticism, oddly suggest some bizarre debating society exercise conducted in costume —around which, of course, swirl the baleful gyrations in the bath-house at Charenton, the production's all-out assault on the senses.

The senses are assaulted, all right, but do they yield? From the film's internal evidence, one can see how it must have looked on the stage. Every so often the camera pulls back, from some dolorous detail of lunacy or some

thundering denunciation, to hold a marvellous stage grouping, greyish-white figures, like lumpish flour-sacks, against the dour set. But close-up breaks up rhythms, forces emphases, and at the same time tidies too much away. Glenda Jackson's Charlotte Corday, for in- stance, seems to be ushered in from the wings every ten minutes or so for a set speech: in between we're allowed to forget her, when surely her forlornly menacing presence should haunt the bath-house. And close-up, in many instances, looks wilfully alienating: these whey- faced loons, with their dropping jaws, squinting stares and blacked-out teeth, are palpably actors, members of the Royal Shakespeare Company hanging on with stern ferocity to the kind of faces children are told not to pull, in case they get stuck that way. Peter Brook is a producer of such abounding intelligence that one always assumes he knows just what effect he is creating. But did he really, in this case, want to leave one with so overwhelming an aware- ness simply of stage make-up?

Conceivably he did; for one motive behind the film, one supposes, must be his interest in adding yet another to the maze of Chinese boxes already presented by the play. The poor case put up by Marat, for instance, may be explained on the grounds that he's no more than de Sade's puppet in the play within the play. And, if one chooses to read it that way, the lunatic puppet for a lunatic's text. There are the repeated theatrical reminders (surviving into the film) that this is a performance on a modern stage. And now Brook adds another element—play within play within film—by occasionally taking the camera right back, past the iron bars which cut off the actors, to show a restless modern audience silhouetted against the bleak white light off the stage.

There's an intriguing mental gymnastic in all this; and anyone with Brook's inherent sense of stage values must enjoy playing off one level of involvement against another—lunging into the thick of the rioting, screaming action, settling on some of the formidable lighting effects achieved by David Watkin's camera, pulling back behind the bars so that the actors look like creatures in some monster zoo. But it remains a gymnastic, a production carved up by the camera, one bleeding chunk of simulated lunacy after another held up for in- spection. The forces at work are centrifugal: the centre fails to hold, and increasingly the emotive devices of the production seem to be lashing around in an intellectual straitjacket. Given all the clamour, it's surprising how un- dangerous the two great historical extremists contrive to sound.

For a film offering a minimum of intellectual content but considerable high-speed relaxation, John Frankenheimer's Grand Prix can be cautiously recommended. After Franken- heimer's stunning deployment of trains, heli- copters and TV sets, one had hoped he might make the definitive motor-racing movie—all cars, and as little plot as possible. Not, unfor- tunately, so: his drivers, headed glumly by James Garner and engagingly by Yves Mon- tand, lead lives of dismal magazine-fiction complexity when not actually strapped down in their cars. But if the road-holding is shaky, the movie performs beautifully when all-out. Frankenheimer can make one feel that there's no more exhilarating place to put a camera than on a Formula One car eating up the track at Monza, or sliding round the tight corners at Monaco.