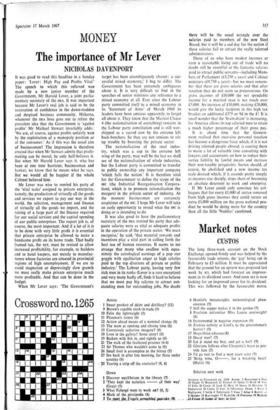 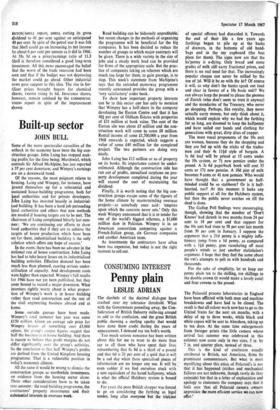 The long three-week account on the Stock Exchange opened firmly and was helped by the favourable trade returns, the 'gap' being cut in February to £3 million. It must be appreciated that the ground for an upturn was prepared last week by to, which had forecast an improve- ment in its dividend cover. And even AEI is now looking for an improved cover for its dividend. This was followed by the favourable ROYAL DUTCH/SHELL report, SHELL cutting its gross dividend to 41 per cent against an anticipated 40 per cent. In spite of the petrol war it was felt that Shell could go on increasing its net income by about 6 per cent per annum as it did in 1966. At 38s 3d on a price/earnings ratio of 11.3 Shell is therefore considered a good long-term investment. All this news encouraged the belief that the worst of the trade recession had been seen and that if the budget was not depressing the market could go ahead. Other industrial news gave support to this idea. The rise in fer- tiliser prices brought buyers for chemical shares, FISONS rising Is 6d. Insurance shares, however, remain subdued by the COMMERCIAL UNION report in spite of the improvement shown.