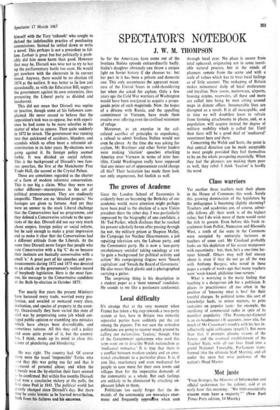 So far the Americans have come out of the Svetlana Stalina episode extraordinarily badly. Stalin's daughter obviously can throw a unique light on Soviet history if she chooses to: but her part in it has been a private and domestic one. This only accentuates the apparent mean- ness of the United States in cold-shouldering her when she asked for asylum. Only a few years ago the Cold War warriors of Washington would have been overjoyed to acquire a propa- ganda prize of such magnitude. Now, the hopes of a détente with Russia, and the appalling commitment in Vietnam, have made them evasive over offering even the civilised minimum of refuge.

Moreover, as an exercise in the cal- culated sacrifice of principles to expediency, a refusal to admit Svetlana Stalina would not even be clever. At the time she was asking for asylum, Mr Brezhnev and other Soviet leaders were making 'election' speeches attacking America over Vietnam in terms of utter hos- tility. Could Washington really have supposed that any minor act of appeasement could change all this? Their hesitation has made them look not only ungenerous, but foolish as well.

The groves of Academe

Since the London School of Economics is evidently bent on becoming the Berkeley of our academic world, more attention might perhaps have been paid to the election of a new Union president there the other day. I was particularly impressed by the biography of one candidate, a Mr Ted Parker, which discloses that he reached his present scholarly haven after passing through the RAF, the military prison at Shepton Mallet, the Campaign for Nuclear Disarmament, a job repairing television sets, the Labour party, and the Communist party. He is now a 'non-party revolutionary socialist' taking sociology at LSE `to gain a background for pclitical activity and action.' His campaigning slogans were 'Smash capitalism' and 'Smash the Board of Governors.' He also wears black plastic and is photographed carrying a guitar.

The surprising thing is his description in a student paper as a 'most unusual' candidate. He sounds to me like a passionate conformist.

It's strange that at the very moment when France has taken a big step towards a two-party system at last, here in Britain two minority separatist parties have suddenly put the cat among the pigeons. I'm not sure the orthodox politicians are going to recover much ground by calling our nationalists 'fascists,' though. One of the Government spokesmen who used this term went on to describe Welsh nationalism as `mediaeval nonsense.' It is true that there is a conflict between modern society and an emo- tional attachment to a particular place. It is, if you like, reactionary and even mediaeval for people to care more for their own towns and villages than for the imperative demands of the community as a whole. But such feelings are unlikely to be eliminated by attaching un- pleasant labels to them.

through local eyes. No place is secure frOm total upheaval, originating not in some inevit- able natural process, but in the minds of planners remote from the scene and with a scale of values which has to treat local feelings as of little account. The reshaping of Britain makes mincemeat daily of local preferences and loyalties. New towns, motorways, airports, housing estates, reservoirs, all these and more are called into being by men sitting around maps in distant offices. Innumerable lives are disrupted as a result. It is all inescapable, and in time we will doubtless learn to refrain from forming attachments to places, and, as a population, will acquire instead the degree of military mobility which is called for. Until then there will be a good deal of 'mediaeval' resentment here and there.

Concerning the Welsh and Scots, the point is that central direction can be made acceptable to most people provided they feel themselves to be on the whole prospering materially. When they feel the planners are making them poor as well, they rebel. I think 'fascism' is hardly the word.

Yet another three teachers took their places in the House of Commons this week. Surely this growing domination of the legislature by the pedagogues is becoming slightly alarming? Teachers and academics are, of course, admir- able fellows all; their work is of the highest value; but I do wish more of them would resist the itch to govern. Even before this fresh re- cruitment from Pollok, Nuneaton and Rhondda West, a tenth of the seats in the Commons were occupied by university lecturers or teachers of some sort. Mr Crosland probably looks on this depletion of his scarce manpower with equanimity : but, then, he's a one-time lec- turer himself. Others may well feel uneasy about it, even if they do not go all the way with Anthony Burgess, who noted in these pages a couple of weeks ago that many teachers were 'weak-kneed, philistine time-servers.'

What is worrying is the nasty feeling that teaching is a dangerous job for a politician. It places its practitioners all too often in the position of 'knowing what is best' for their trustful charges. In political terms this sort of knowledge leads, in minor matters, to prim restraints on popular taste: for example, the sterilising of commercial radio in spite of its manifest popularity. (The Postmaster-General is an ex-headmaster.) It accounts. inter alia, for much of Mr Crossman's trouble with his less in- tellectually agile colleagues (pupils?). But more than that. it prompts gloomy visions of the future, and the eventual establishment of the Teacher State, with all our lives fitted into a grand National Timetable, Parliament trans- formed into the ultimate Staff Meeting, and all under the stern but wise guidance of the nation's Head Master.

'Yvon Bourges, the Minister of Information and official spokesman for the cabinet, said at an early hour this morning: "We tttttt-etaoishrdlu etaocm etcm have a majority."' (New York Times Paris edition, 14 March.)