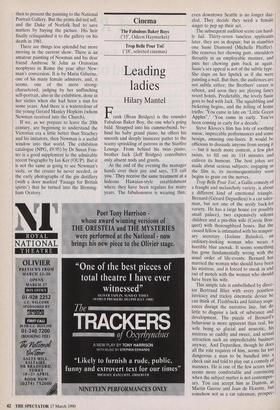 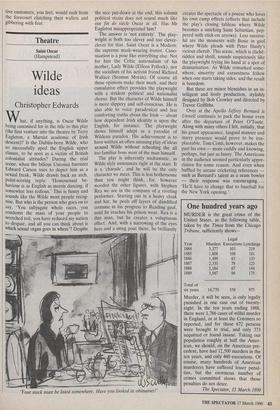 Frank (Beau Bridges) is the rounder Fabulous Baker Boy, the one who's going bald. Strapped into his cummerbund, be- hind his baby grand piano, he offers his smooth and deeply insincere patter to the scanty sprinkling of patrons in the Starfire Lounge. From behind his twin . piano, brother Jack (Jeff Bridges) contributes only absent nods and grunts.

At the end of the evening the manager hands over their pay and says, 'I'll call you.' They receive the same treatment at a hideous Hawaian-style establishment where they have been regulars for many years. The fabulousness is wearing thin; even downtown Seattle is no longer daz- zled. They decide they need a female singer to pep up their act.

The subsequent audition scene can hard- ly fail. Thirty-seven tuneless applicants later, they are in despair; but in stumbles one Susie Diamond (Michelle Pfeiffer). She removes her chewing gum, smoulders throatily in an employable manner, and puts her chewing gum back in again. Susie's sex appeal is not of the subtle type.

She slaps on her lipstick as if she were painting a wall. But then, the audiences are not subtle either; the Brothers' career is reborn, and soon they are playing fancy resort hotels. Predictably, the lovely Susie goes to bed with Jack. The squabbling and bickering begins, and the telling of home truths: 'You came in late on "Little Green Apples".' You came in early. You've been coming in early for a decade.'

Steve Kloves's film has lots of soothing music, impeccable performances and some benign, amusing one-liners. It would be officious to dissuade anyone from seeing it — but it needs more content, a few plot

twists, to fill out its 114 minutes and enliven its humour. The best jokes are made about serious subjects; engaging as the film is, its inconsequentiality soon begins to grate on the nerves.

Trop Belle Pour Toi!, a Gallic comedy of a fraught and melancholy variety, is about

a different kind of emotional triangle.

Bernard (Gerard Depardieu) is a car sales- man, but not one of the seedy back-lot variety. He has a large house (or possibly small palace), two expensively solemn children and a pin-thin wife (Carole Bou- quet) with thoroughbred bones. But the cussed fellow is infatuated with his tempor- ary secretary (Joslane Balasko), an ordinary-looking woman who wears a horrible blue anorak. It seems something has gone fundamentally wrong with the usual order of life-events: Bernard has married the woman who should have been his mistress, and is forced to sneak in and out of motels with the woman who should have been his wife.

This simple tale is embellished by direc- tor Bertrand Blier with every pointless intricacy and tricksy cinematic device he can think of. Flashbacks and fantasy sequ- ences disrupt the narrative line, but do little to disguise a lack of substance and development. The puzzle of Bernard's behaviour is more apparent than real, his wife being so glacial and neurotic, his mistress so cuddly and sweet, and sexual attraction such an unpredictable business anyway. And Depardieu, though he does all the role requires of him, seems far too dangerous a man to be bundled into a check suit and told to play out a comedy of manners. He is one of the few actors who seems more comfortable and convincing

when the subject matter is not contempor- ary. You can accept him as Danton, as Martin Guerre and Jean de Florette, but somehow not as a car salesman; prospec-

tive customers, you feel, would rush from the forecourt clutching their wallets and gibbering with fear.