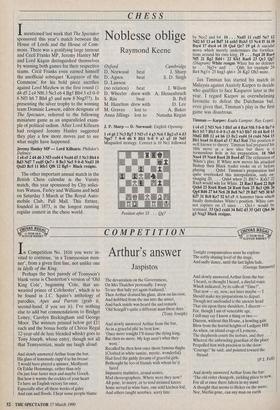 Imentioned last week that The Spectator sponsored this year's match between the House of Lords and the House of Com- mons. There was a gratifying large turnout and Cecil Franks MP, Jeremy Hanley MP and Lord Kagan distinguished themselves by winning both games for their respective teams. Cecil Franks even earned himself the unofficial sobriquet `Kasparov of the Commons' for his bold piece sacrifice against Lord Mayhew in the first round (1 d4 d5 2 c4 Nf6 3 Nc3 e6 4 Bg5 Bb4 5 e3 0-0 6 Nf3 h6 7 Bh4 g5 and now 8 Nxg5!?). In presenting the silver trophy to the winning team Dominic Lawson, editor designate of The Spectator, referred to the following miniature game as an unparalleled exam- ple of political sadism. After Lord Killearn had resigned Jeremy Hanley suggested they play a few more moves just to see what might have happened.

Jan Timman has started his match in Malaysia against Anatoly Karpov to decide who qualifies to face Kasparov later in the year. I regard Karpov as overwhelming favourite to defeat the Dutchman but, even given that, Timman's play in the first game was disastrous.