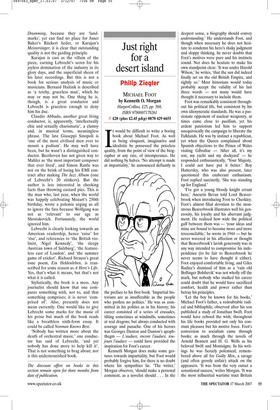 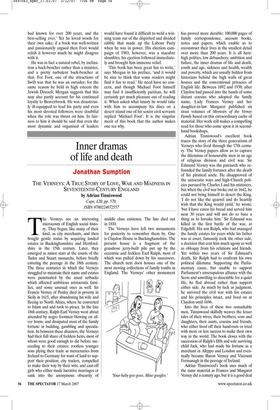 Just right for a desert island

MICHAEL FOOT by Kenneth O. Morgan HarperCollins, £25, pp. 568, ISBN 9780007178261 ✆ £20 (plus £2.45 p&p) 0870 429 6655 It would be difficult to write a boring book about Michael Foot. As well as being eloquent, imaginative and idealistic he possessed the priceless quality, from the point of view of the biographer at any rate, of intemperance. He did nothing by halves. ‘No attempt is made at impartiality,’ he announced defiantly in the preface to his first book. ‘Impartial historians are as insufferable as the people who profess no politics.’ He was as committed in his politics as in his history; his career consisted of a series of crusades, tilting sometimes at windmills, sometimes at real dragons, but always conducted with courage and panache. One of his heroes was Georges Danton and Danton’s apophthegm — L’audace, encore l’audace, toujours l’audace — could have provided the inspiration for Foot’s career.

Kenneth Morgan does make some gestures towards impartiality, but Foot would probably forgive him, for there is no doubt where his sympathies lie. ‘The writer,’ Morgan observes, ‘should make a personal comment, as a novelist should . . . In the deepest sense, a biography should convey understanding.’ He understands Foot, and though when necessary he does not hesitate to condemn his hero’s shaky judgment and sloppy thinking, he never doubts that Foot’s motives were pure and his instincts sound. Nor does he hesitate to make his own standpoint clear. ‘It was under Harold Wilson,’ he writes, ‘that the sun did indeed finally set on the old British Empire, and rightly so.’ Most historians would today probably accept the validity of his last three words — not many would have thought it necessary to include them.

Foot was remarkably consistent throughout his political life, but consistent by his own idiosyncratic standards. He was a passionate opponent of nuclear weaponry, at times came close to pacifism, yet his ardent patriotism led him to support unequivocally the campaign to liberate the Falklands. He was by instinct a republican, yet when the Queen complained about Spanish objections to the Prince of Wales visiting Gibraltar — ‘After all, it’s my son, my yacht and my dockyard’ — he responded enthusiastically, ‘Your Majesty, I could not have put it better.’ Roy Hattersley, who was also present, later questioned this exuberant enthusiasm. Foot replied succinctly, ‘She was standing up for England.’ ‘I’ve got a young bloody knight errant here,’ Aneurin Bevan told Lord Beaverbrook when introducing Foot to Cherkley. Foot’s almost filial devotion to the monstrous Beaverbrook illustrates well his generosity, his loyalty and his aberrant judgment. He realised how wide the political gulf between them was — ‘your ideas and mine are bound to become more and more irreconcilable,’ he wrote in 1944 — but he never wavered in his affection or thought that Beaverbrook’s lavish generosity was in any way intended to compromise his independence (to be fair to Beaverbrook he never seems to have thought it either). Foot enjoyed comfortable living, and Giles Radice’s dismissal of him as a ‘vain old Bollinger Bolshevik’ was not wholly off the mark, but nobody who studied his career could doubt that he would have sacrificed comfort, health and power rather than betray his principles.

‘Let the boy be known for his books,’ Michael Foot’s father, a redoubtable radical and bibliophile, observed after his son published a study of Jonathan Swift. Foot would have echoed the wish; throughout his life books provided not only his constant pleasure but his motive force. Foot’s conversion to socialism came through books; as much through the novels of Arnold Bennett and H. G. Wells as his beloved Swift and Montaigne. In his writings he was fiercely polemical; remembered above all for Guilty Men, a savage (and often grossly unfair) attack on the appeasers. ‘It was from the very outset a sensational success,’ writes Morgan. ‘It was the most influential wartime tract Britain had known for over 200 years, and the best-selling ever.’ Yet he loved words for their own sake; if a book was well-written and passionately argued then Foot would relish it however much he might disagree with it.

He was in fact a natural rebel, by inclination a back-bencher rather than a minister, and a pretty turbulent back-bencher at that. For Foot, one of the attractions of Swift was that he was an outsider; for the same reason he held in high esteem the Jewish Disraeli; Morgan suggests that this may also partly account for his continued loyalty to Beaverbrook. He was disastrously ill-equipped to lead his party and even his most devoted followers were doubtful when the role was thrust on him. In fairness to him it should be said that even the most dynamic and organised of leaders would have found it difficult to weld a winning team out of the dispirited and divided rabble that made up the Labour Party when he was in power. His election campaign of 1983, however, was a macabre shambles; his ejection followed immediately and brought him immense relief.

‘This book has been great fun to write,’ says Morgan in his preface, ‘and it would be nice to think that some readers might find it fun to read.’ He need have no concern, and though Michael Foot himself may find it insufficiently partisan, he will certainly get much pleasure out of reading it. When asked what luxury he would take with him to accompany his discs on a desert island one of his senior civil servants replied ‘Michael Foot’. It is the singular merit of this book that the author makes one see why.