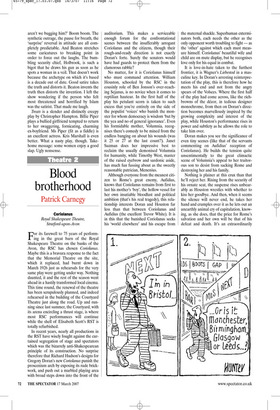 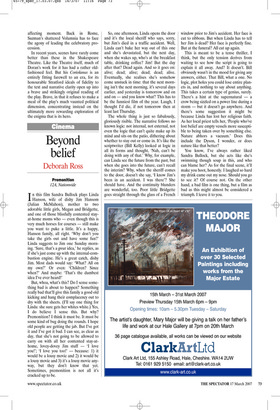 For its farewell to 75 years of performing in the great barn of the Royal Shakespeare Theatre on the banks of the Avon, the RSC has chosen Coriolanus. Maybe this is a bravura response to the fact that the Memorial Theatre on the site, which it replaced, had burnt down in March 1926 just as rehearsals for the very same play were getting under way. Nothing daunted, it and the rest of the season went ahead in a hastily transformed local cinema. This time round, the renewal of the theatre has been scrupulously planned, and indeed rehearsed in the building of the Courtyard Theatre just along the road. Up and running since last summer, the Courtyard, with its arena encircling a thrust stage, is where most RSC performances will continue while the shell of Elisabeth Scott’s RST is totally refurbished.

In recent years, nearly all productions in the RST have wisely fought against the curtained segregation of stage and spectators which was the bizarrely anti-Shakespearean principle of its construction. No surprise therefore that Richard Hudson’s designs for Gregory Doran’s new Coriolanus punish the proscenium arch by exposing its rude brickwork, and push out a marbled playing area with broad steps down into the front of the auditorium. This makes a serviceable enough forum for the confrontational scenes between the insufferably arrogant Coriolanus and the citizens, though their rough-and-ready direction is not exactly Doran’s forte. Surely the senators would have had guards to protect them from the clamorous rabble?

No matter, for it is Coriolanus himself who must command attention. William Houston, schooled by the RSC in the cousinly role of Ben Jonson’s over-reaching Sejanus, is no novice when it comes to reptilian hauteur. In the first half of the play his petulant scorn is taken to such excess that you’re entirely on the side of the populist ‘voices’ who banish the monster for whom democracy is wisdom ‘but by the yea and no of general ignorance’. Even his formidable mother, Volumnia, recognises there’s comedy to be mined from the endless banging on about his wounds (was it 25 or 27 at the last count?). Janet Suzman does her impressive best to reclaim the usually demonised Volumnia for humanity, while Timothy West, master of the raised eyebrow and sardonic aside, has much fun fussing about as the sweetly reasonable patrician, Menenius.

Although everyone from the meanest citizen to Rome’s great enemy, Aufidius, knows that Coriolanus remains from first to last his mother’s ‘boy’, the hollow vessel for her own insatiable bloodlust and political ambition (that’s his real tragedy), this relationship interests Doran and Houston far less than that between Coriolanus and Aufidius (the excellent Trevor White). It is in this that the banished Coriolanus seeks his ‘world elsewhere’ and his escape from the maternal shackle. Superhuman exterminators both, each needs the other as the only opponent worth troubling to fight — as the ‘other’ against which each must measure himself. Coriolanus’ beautiful wife and child are on mute display, but he recognises love only for his equal in combat.

It is love-in-hate taken to the furthest frontier, it is Wagner’s Liebestod in a masculine key. In Doran’s arresting reinterpretation of the play, this is therefore how he meets his end and not from the angry spears of the Volsces. Where the first half of the play had come across, like the richbrowns of the décor, in tedious designer monochrome, from then on Doran’s direction becomes marvellously inspired by the growing complexity and interest of the play, while Houston’s performance rises in power and subtlety as he allows the role to take him over.

Doran makes you see the significance of even tiny scenes (like that of the servants commenting on Aufidius’ reception of Coriolanus). He builds the tension quite unsentimentally to the great climactic scene of Volumnia’s appeal to her traitorous son to desist from sacking Rome and destroying her and his family.

Nothing is plainer at this crux than that he’ll reject her. Rising from the security of his ornate seat, the suspense rises unbearably as Houston wrestles with whether to kiss her goodbye. And then, when it seems the silence will never end, he takes her hand and crumples over it as he lets out an unearthly animal cry of capitulation, knowing, as she does, that the price for Rome’s salvation and her own will be that of his defeat and death. It’s an extraordinarily affecting moment. Back in Rome, Suzman’s shattered Volumnia has to face the agony of leading the celebratory procession.

In recent years, scenes have rarely come better than these in the Shakespeare Theatre. Like the Theatre itself, much of Doran’s work for it has had a rather oldfashioned feel. But his Coriolanus is an entirely fitting farewell to an era, for its honourable Stratford ideals of fidelity to the text and narrative clarity open up into a brave and strikingly original reading of the play. Brave, in that it refuses to make a meal of the play’s much vaunted political dimension, concentrating instead on the ultimately more rewarding exploration of the enigma that is its hero.