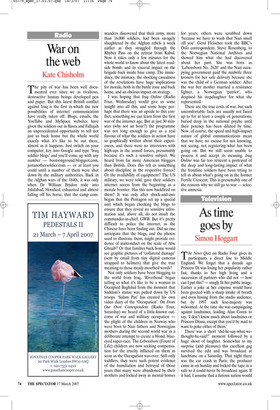 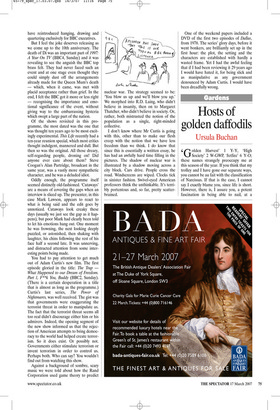 As time goes by

The News Quiz on Radio Four gives its participants a direct line to Middle England. We forget that a decade ago Princess Di was losing her popularity rather fast, thanks to her high living and a succession of partners who did not — how can I put this? — snugly fit her public image. Earlier a joke at her expense would have been greeted with a sharp intake of breath and even hissing from the studio audience, but by 1997 such lese-majesty was welcomed. At the time she was campaigning against landmines, leading Alan Coren to say, ‘I don’t know much about landmines or Princess Diana, except that you’d be mad to want to poke either of them.’ There was a short ‘did-he-say-what-wethought-he-said?’ moment followed by a huge shout of laughter. Somewhat to my surprise (and pleasure) this excellent gag survived the edit and was broadcast at lunchtime on a Saturday. That night there was the car crash in Paris; the producer came in on Sunday and locked the tape in a safe so it could never be broadcast again. If it had, I assume that a furious nation would have reintroduced hanging, drawing and quartering exclusively for BBC executives.

But I feel the joke deserves releasing as we come up to the 10th anniversary. The death of Di was an important part of 1997: A Year On TV (BBC4, Sunday) and it was revealing to see the anguish the BBC top brass felt. They had never faced such an event and at one stage even thought they could simply dust off the arrangements already made for the Queen Mum’s death — which, when it came, was met with placid acceptance rather than grief. In the end, I felt the BBC got it more or less right — recognising the importance and emotional significance of the event, without giving way to the embarrassing hysteria which swept a large part of the nation.

Of the shows revisited in this programme, the most dated was the one that was thought ten years ago to be most excitingly experimental. This Life recently had a ten-year reunion special, which most critics thought indulgent, mannered and dull. But then so was the original. All those dreary, self-regarding people, droning on! Did anyone ever care about them? Steve Coogan’s Alan Partridge, broadcast in the same year, was a vastly more sympathetic character, and he was a deluded idiot.

Oddly enough, the programme itself seemed distinctly old-fashioned. ‘Cutaways’ are a means of covering the gaps when an interview is sliced up. The presenter, in this case Mark Lawson, appears to react to what is being said and the edit goes by unnoticed. Cutaways look creaky these days (usually we just see the gap as it happens), but poor Mark had clearly been told to let his emotions hang out. One moment he was frowning, the next looking deeply puzzled, or astonished, then shaking with laughter, his chins following the rest of his face half a second late. It was unnerving, and distracted attention from some interesting points being made.

You had to pay attention to get much out of Adam Curtis’s new film. The first episode gloried in the title: The Trap What Happened to our Dream of Freedom. Part 1, F**k You, Buddy (BBC2, Sunday). (There is a certain desperation in a title that is almost as long as the programme.) Curtis’s last series, The Power of Nightmares, was well received. The gist was that governments were exaggerating the terrorist threat in order to manipulate us. The fact that the terrorist threat seems all too real didn’t discourage either him or his admirers. Indeed, the opening segment of the new show informed us that the rejection of American attempts to bring democracy to the world had helped create terrorism. So it does exist. Or possibly not. Governments either stimulate terrorism or invent terrorism in order to control us. Perhaps both. Who can say? You wouldn’t find out from watching this show.

Against a background of sombre, scary music we were told about how the Rand Corporation used game theory to predict nuclear war. The strategy seemed to be: ‘You blow us up and we’ll blow you up.’ We morphed into R.D. Laing, who didn’t believe in insanity, then on to Margaret Thatcher, who didn’t believe in society. Or, rather, both mistrusted the notion of the population as a single, right-minded collective.

I don’t know where Mr Curtis is going with this, other than to make our flesh creep with the notion that we have less freedom than we think. I do know that since this is essentially a written essay, he has had an awfully hard time filling in the pictures. The shadow of nuclear war is illustrated by a shadow moving across a city block. Cars drive. People cross the road. Windscreens are wiped. Clocks tick in sinister fashion. Swivel-eyed American professors think the unthinkable. It’s terribly portentous and, so far, pretty scatterbrained. One of the weekend papers included a DVD of the first two episodes of Dallas, from 1978. The series’ glory days, before it went bonkers, are brilliantly set up in the first hour: the plot, the setting and the characters are established with hardly a wasted frame. Yet I had the awful feeling that if I had been reviewing it 29 years ago I would have hated it, for being slick and as manipulative as any government denounced by Adam Curtis. I would have been dreadfully wrong.