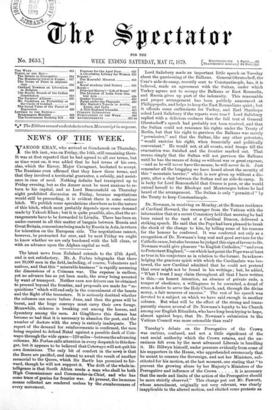 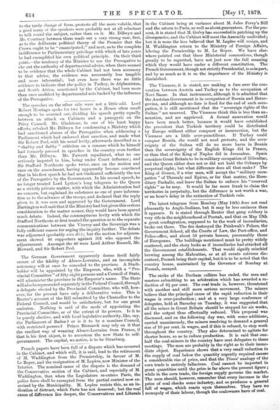 Page 1, 17 May 1879 — Tuesday's debate on the Prerogative of the Crowli was curious,
Close

Tuesday's debate on the Prerogative of the Crowli was curious,

confused, and not a little significant of the vast social authority which the Crown retains, and the un- easiness felt even by the most advanced Liberals in handling it. Mr. Dillwyn himself, under pressure evidently from some of his supporters in the House, who apprehended erroneously that he meant to censure the Sovereign, and not her Ministers, sub- stituted for his motion, at the last moment, one stating that "to prevent the growing abuse by her Majesty's Ministers of the

Prerogative and influence of the Crown it is necessary that the mode and limits of the action of the Prerogative should be more strictly observed." This change put out Mr. Fawcett, whose amendment, originally not very relevant, was clearly inapplicable to the altered motion, and elicited some protests as

to the tardy change of form, protests all the more voluble, that a good many of the speakers were probably not at all reluctant to talk round the subject, rather than on it. Mr. Dillwyn and Mr. Courtney between them made out a very strong case, first, as to the deliberate political theory of the Premier that the Crown ought to be "emancipated;" and next, as to the complete indifference to Parliamentary privilege with which of late years he had exemplified his own political principle. On their third point,—the tendency of the Minister to use the Prerogative to eke out the authority of departmental advice, when there seemed to be evidence that the whole Cabinet had not been accessory to that advice, the evidence was necessarily less tangible and more inferential ; but even here there was no little evidence to indicate that the policy in Turkey, in Afghanistan, and South Africa, sanctioned by the Cabinet, had been more than once modified by departmental acts backed by the influence of the Prerogative.