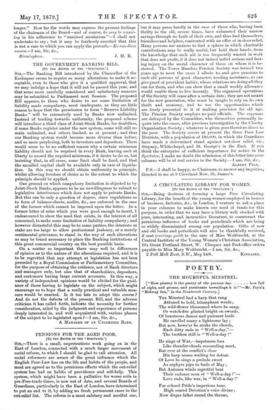 [TO THE EDITOR OF THE "SPECTATOR.'] SIR,—The Banking Bill introduced by the Chancellor of the Exchequer seems to require so many alterations to make it ac- ceptable, even to those who give it a qualified approval, that we may indulge a hope that it will not be passed this year, and that some more carefully considered and satisfactory measure may be submitted to Parliament next Session. The proposed Bill appears, to those who desire to see some limitation of liability made compulsory, most inadequate, as they see little reason to hope that the permission to form "Reserve Liability Banks" will be extensively used by Banks now unlimited. Instead of tending towards uniformity, the proposed scheme will introduce a third class of Joint-Stock Banks, for doubtless, if some Banks register under the new system, some will still re- main unlimited, and others limited, as at present ; and thus our Banking system would become more diverse than before, and so more perplexing, both to investors and depositors. There would seem to be no sufficient reason why a certain minimum liability should not be required in every Bank, leaving each at liberty to exceed the required minimum, if it desire to do so, but insisting that, in all cases, some limit shall be fixed, and that the uncalled capital shall be available only in case of liquida- tion. In this way we should obtain uniformity in principle, whilst allowing freedom of choice as to the extent to which the principle should be applied.

One ground on which compulsory limitation is objected to by Joint-Stock Banks, appears to be an unwillingness to submit to legislative interference which does not apply to private Banks. But this can be only a question of degree, since regulations as to form of balance-sheets, audits, &c., are enforced in the case of the former which cannot be imposed upon the latter. In a former letter of mine which you were good enough to insert, I endeavoured to show the need that exists, in the interest of all concerned, to make some limitation of liability compulsory ; and :however distasteful this may be to some parties, the interests at stake are too large to allow professional jealousy, or a merely sentimental grievance, to stand in the way of such alterations as may be found necessary to place the Banking institutions of this great commercial country on the best possible basis.

On a matter so important there may well be differences of opinion as to the nature of the alterations required, and it is to be regretted that any attempt at legislation has not been preceded by a Royal Commission or Parliamentary Committee, for the purpose of obtaining the evidence, not of Bank directors and managers only, but also that of shareholders, depositors, and customers having large current accounts. In this way, a variety of independent opinions would be elicited for the guid- ance of those having to legislate on the subject, which might encourage us to hope that a really practical and valuable mea- sure would be enacted. Is it too late to adopt this course ? And do not the defects of the present Bill, and the adverse criticism it has called forth, indicate the necessity for further consideration, aided by the judgment and experience of persons .deeply interested in, and well acquainted with, various phases of the subject to be legislated upon P—I am, Sir, &c.,

A MANAGER OF AN UNLIMITED BANK.