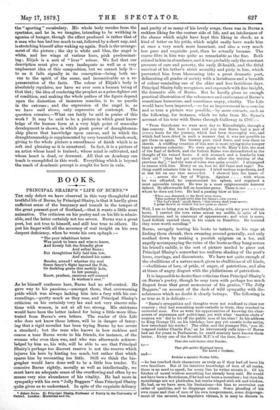 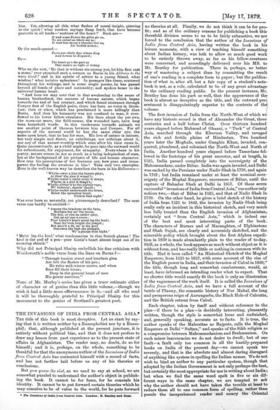 PRLYCIPAL SHAIRP'S "LIFE OF BURNS."* 'THE only defect we have observed in this very thoughtful and truthful life of Burns, by Principal Shairp, is that it hardly gives sufficient sense of the buoyancy and tumult in the temper of the great peasant-poet of Scotland,—that it wants a little more animation. The criticism on his poetry and on his life is admir- able, and the latter certainly not too severe. Burns was a great poet, but not true to himself, and still less true to others. He put his finger with all the accuracy of real insight on his own -deepest deficiency, when he wrote his own epitaph :—

"The poor inhabitant below

Was quick to learn and wise to know, And keenly felt the friendly glow And softer flame; But thoughtless folly laid him low, And stained his name. Reader, attend ! whether thy soul Soars fancy's flight beyond the Pole, Or darkling grubs this earthly hole, In low pursuit ; Know, prudent, cautious self-control Is wisdom's root."

As he himself confesses here, Burns had no self-control. He gave way to his passions,—amongst them, that overweening pride which was always lashing him into a fury with his sur- roundings,—pretty much as they rose, and Principal Shairp's -oriticism on his certainly very lax and not very sincere rela-

tions with women, is not at all too strong. His strictures would have been the better indeed for being a little more illus- trated from Burns's own letters. The reader of this Life who does not know these letters, will be in danger of fancy- ing that a rigid moralist has been trying Burns by too severe

• a standard ; but the man who knows in how reckless and -coarse a tone Burns wrote to his friends, for instance, of the woman who even then was, and who was afterwards acknow- ledged by him as, his wife, will be able to see that Principal Shairp's perhaps too discreet reserve is not the reserve which injures his hero by hinting too much, but rather that which spares him by recounting too little. Still we think the bio- grapher would have done well to be a little less tender. To .conceive Burns rightly, morally as well as intellectually, we must have an adequate sense of the overflowing and often by no means very nice abundance of his vitality. He had more in sympathy with his own "Jolly Beggars" than Principal Shairp quite gives us to understand. In spite of the exquisite delicacy

• • Robert Bursa. BY Principal filudrp, Professor of Poetry in the University of *earl London: Macmillan and Co.

and purity of so many of his lovely songs, there was in Burns a reckless liking for the coarser side of life, and an intolerance of the shame which might have kept this liking in check, as a kind of fetter on his pride, which might easily have made him at once a very much more luxuriant, and also a very much less pure and exquisite poet, than he actually became. The coarse fibre in him was quite as remarkable as the fine. Both

existed in him in abundance, and it was probably only the constant pressure of care and poverty, the early ill-health, and the fitful survival of his father's strict morality and piety in him, which prevented him from blossoming into a great dramatic poet,

delineating all grades of society with a lavishness and a breadth of colour reminding one of the older and less fastidious days. Principal Shah-p fully recognises, and expounds with fine insight, the dramatic side of Burns. But he hardly gives us enough practical illustration of the vehemence and exuberance of Burns's sometimes humorous, and sometimes angry, vitality. The Life would have been improved,—so far as improvement in so concise and so true a picture was possible,—by more extracts, such as the following, for instance, which we take from Mr. Syme's account of his tour with Burns through Galloway in 1793 :—

"From Gatehouse we went next day to Kircudbright, through a fine country. But here I must tell you that Burns had a pair of jemmy boots for the journey, which had been thoroughly wet, and which had been dried in such a manner that it was not possible to get them on again. The brawny poet tried force, and tore them to shreds. A whiffling vexation of this sort is more trying to the temper than a serious calamity. We were going to St. Mary's Isle, the seat of the Earl of Selkirk, and the forlorn Barns was discomforted at the thought of his ruined boots. A sick stomach and a headache lent their aid" [they had got utterly drunk after the wetting of the previous day], "and the man of verse was quite =cable. I attempted to reason with him. Mercy on us, how he did fume and rage ! No. thing could reinstate him in temper. I tried various expedients, and at last hit on one that succeeded. I showed him the house of . . . . across the bay of Wigton. Against . . . . with whom he was offended, he expectorated his spleen, and regained a most agreeable temper. He was in a most epigrammatic humour indeed. He afterwards fell on humbler game. There is one whom he does not love. He had a passing blow at him

When — deceased, to the Devil went down, 'Twas nothing would serve him but Satan's own crown ; "Thy fool's head," quoth Satan, "that crown shall wear never ; I grant thou'rt as wicked, but not quite so clever."'

Well, I am to bring you to Kircudbright, along with my poet without boots. I carried the torn ruins across my saddle, in spite of his fulminations, and in contempt of appearances ; and what is more, Lord Selkirk carried them in his coach to Dumfries. He insisted they were worth mending."

Burns, savagely tearing his boots to tatters, in his rage at finding them shrunk, then swearing around generally, and only

soothed down by making a poorish epigram on a foe, and angrily accompanying the rains of the boots as they hung across his friend's saddle, is the sort of picture needed to piece out Principal Shairp's somewhat too uniform shading of the poet's loves, cravings, and discontents. We have not quite enough of the ebullitions of a nature much given to ebullitions of all kinds, —ebullitions of love, of pride, of anger, of patriotism, and also at times of angry disgust with the philistinism of patriotism.

It is impossible to desire finer criticism than Principal Shairp's on Burns's poetry, though he may turn with perhaps too much disgust from that great monument of his genius, "The Jolly Beggars," on account of the dash of wild sympathy with dis- soluteness which no doubt it clearly betrays. The following is as true as it is delicate :— " Burns's sympathies and thoughts were not confined to class nor country ; they had something more catholic in them, they reached to universal man. Few as were his opportunities of knowing the char- acters of statesmen and politicians, yet with what 'random shots countra wit' did he hit off the publics men of his time ! In his address to King George III. on his birthday, how gay yet caustic is the satire, how trenchant his stroke ! The elder, and the younger Pitt, you tongued tinkler Charlie Fox,' as he irreverently calls him—if Burns had sat for years in Parliament, he could scarcely have known theta better. Every one of the Scottish of the time, from— That gee auld-farran chiel Dundas,

—he has touched their characters as truly as if they had all been his own familiars. But of his intuitive knowledge of men of all ranks, there is no need to speak, for every line he writes attests it. Of his fetches of moral wisdom something has already been said. He would not have been a Scotchman, if he had not been a moraliser ; but then his moralisings are not platitudes, but truths winged with wit and wisdom. He had, as we have seen, his limitations—his bias to overvalue one order of qualities, and to disparage others. Some pleading of his own cause and that of men of his own temperament, some disparage. meat of the severer, less impulsive virtues, it is easy to discern in to— Or the much-quoted-

Facts are chiels that wines ding And downs be disputed ; The heart ay's the part ay That makes us right or wrang.

Who on the text, 'He that is without sin among you, let him first cast a stone,' ever preached such a sermon as Barns in his Address to the Ivaco Guid? and in his epistle of advice to a young friend, what wisdom ! what incisive aphorisms ! In passages like these, scattered throughout his writings, and in some single poems, he has passed beyond all bonds of place and nationality, and spoken home to the universal human heart.

"And here we may note that in that awakening to the sense of human brotherhood, the oneness of human nature, which began towards the end of last century, and which found utterance through Cowper first of the English poets, there has been no voice in litera- ture, then or since, which has proclaimed it more tellingly than Burns. And then his humanity was not confined to man, it over- flowed to his lower fellow-creatures. His lines about the pet ewe, the worn-out mare the field-mouse, the wounded hare, have long been household words. In this tenderness towards animals we see another point of likeness between him and Cowper. For all aspects of the natural world he has the same clear eye, the same open heart, that he has for man. His love of nature is intense, but very simple and direct, no subtilisings, nor refinings about it, nor any of that nature-worship which soon after his time came in. Quite unconsciously, as a child might, he goes into the outward world for refreshment, for enjoyment, for sympathy. Everywhere in his poetry, nature comes in, not so much as a being independent of man, but as the background of his pictures of life and human character. How true his perceptions of her features are, how pure and trans- parent the feeling she awakens in him ! Take only two examples. Here is the well-known way he describes the burn in his Halloween- ' Whyles owre a linn the blirnie plays, As thro' the glen it wimpl't ; Whyles round a rocky scaur it strays, Whyles in a wiel it dimprt ;

Was ever burn so naturally, yet picturesquely described ? The next verse can hardly be omitted— "Among the brachens on the brae, Between her an' the moon, The dell, or else an outler quay, Gat up an' gae a croon :

I Maist lap the hool,' what condensation in that Scotch phrase ! The hool is the pod of a pea—poor Lizzie's heart almost leapt out of its encasing sheath."

Why did not Principal Shairp embellish his fine criticism with Wordsworth's noble verse from the lines on Burns P- " Through busiest street and loneliest glen Are felt the flashes of his pen ;

He rules mid-winter snows, and when Bees fill their hives ; Deep in the general heart of men His power survives."

None of Mr. Morley's series has given a truer estimate either of character or of genius than this little volume,—though we wish it had a little more effervescence in it,—and all who read it will be thoroughly grateful to Principal Shairp for this monument to the genius of Scotland's greatest poet.

him. Yet, allowing all this, what flashes of moral insight, piercing to the quick ! what random sayings flung forth, that have become proverbs in all lands= mottoes of the heart !' Such are-

0 wad some Power the giftie gie us, To see oursel as idlers see us

It wad frae mony a blunder free us, An' foolish notion;