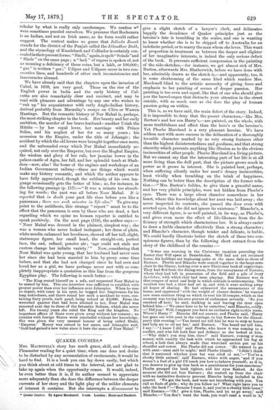 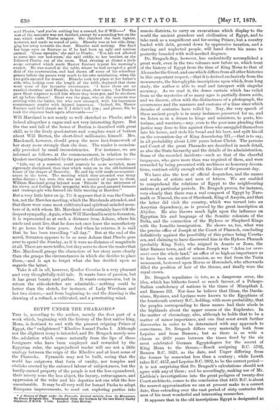 Mas. MACDONELL'S story has much grace, skill, and vivacity. Pleasanter reading for a quiet time, when one does not desire to be disturbed by any accumulation of excitements, it would be hard to find. It is a book you can lay down easily, but which you think about at odd times in the interval, and are glad to take up again when the opportunity comes. It would, indeed, be even better than it is, if its author seemed to appreciate more adequately than she does the difference between the deeper currents of her story and the light play of the milder elements of interest it contains. But she interrupts a denouement to

give a slight sketch of a lawyer's clerk, and delineates

happily the decadence of Quaker principles just as the heroine's fate is trembling in the scales, and one is wanting to know whether she is to be shipped off to Australia for an indefinite period, or to marry the man whom she loves. This want of proportion in treatment as between the deeper and slighter

of her imaginative interests, is indeed the only serious defect of the book. It prevents sufficient compression in the painting of the side-sketches,--for instance, we get almost sick of Mrs. Burton, afterwards Mrs. Blatherwick, before we have done with her, admirably drawn as the sketch is,—and apparently, too, it is some shortcoming of the same kind which renders Mrs. Macdonell blind to the artistic necessity of giving force and

emphasis to her painting of scenes of deeper passion. Her painting is too even and equal, like that of one who should give you the barrel-organ that distracts your attention in the street outside, with as much care as she does the play of human passion going on within.

This is, as we have said, the main defect of the story. Indeed, it is impossible to deny that the poorer characters,—like Mrs. Burton's and her son Harry's,—are painted, on the whole, with more truthfulness and effect than the hero's or the heroine's.

Yet Phoebe Marsland is a very pleasant heroine. We have seldom met with more success in the delineation of a thoroughly loveable character marked by no very strong features other than the highest disinterestedness and goodness, and that strong sincerity which prevents anything like illusion as to the obvious insincerities of other people. Phoebe Marsland is a living picture. But we cannot say that the interesting part of her life is at all more living than the dull part, that the picture grows much in power as it grows in interest. She is painted best, perhaps, when suffering silently under her aunt's dreary insincerities, least vividly when trembling on the brink of happiness. Nothing can be better than the description of the former rela- tion :—" Mrs. Burton's foibles, to give them a graceful name, and her very pliable principles, were not hidden from Phoebe's eyes. There was a large silent chamber somewhere in her heart, where this knowledge about her aunt was laid away ; she never inspected its contents, she passed the door even with averted eyes, but she did not ignore its existence." Blanche's, a very different figure, is as well painted, in its way, as Phoebe's, and gives even more the effect of life-likeness from the de- ficiency of strength which characterises her. It is always easier to draw a feeble character effectively than a strong character ; and Blanche's character, though tender and delicate, is feeble.

We could hardly illustrate better the sketch of these two con- spicuous figures, than by the following short extract from the story of the childhood of the cousins :—

"It was one morning in the Christmas vacation preceding the Easter that Will spent at Drumbledon. Will had not yet returned home, his holidays not beginning quite at the same date as those of Eustace. Phcebe and Blanche were seated together in the large arm- chair in the library, looking over a new Christmas book of engravings. They had fled from the dining-room, from the annoyances of Eustace, whom they had left in possession of the field and a pile of ivory Spielchen, with which they had been playing. But Eustace was in that temper of mind and body in which solitude is uninteresting. The weather was bad, a thaw had set in, and with it were melting away all hopes of skating. He had exhausted the amusements of the house, and oppressed with the weight of chance desires,' he wanted now some sentient thing on which to vent his ill-temper, which at the moment was trying his own powers of endurance severely. 'So you sneaked off here,' he said, stalking in and leaving the door open behind him.—' We came here to be by ourselves,' said Blanche, coldly.

— ' Did you! Well, I suppose you have no exclusive right to this room. Where's Harry ?' Blanche did not answer, and Phoebe said, 'Harry has gone out with aunt in the carriage, to buy flowers for the dinner- party this evening.'—' You heard me tell him he was to stop at home and help me to oil my bat,' said Eustace. You heard me tell him, I say.'—' I know I did,' said Phcebe, who knew it was coming to a. conflict, and who felt both fear and defiance as she looked at him.

— ‘ Why didn't you stop him, then ?' said Eustace, coming a' step nearer, with exactly the look with which he approached his fag at school, a look that always made that wretched urchin put up his shoulder and cower. But Phcebe did not cower. 'He wanted to go with aunt—aunt said he might,' said Phcebe bluntly. I didn't think that it mattered whethdr your bat was oiled or not.'—' You're a cheeky little animal,' said Eustace, white with anger, 'and if you weren't a fool of a girl I'd teach you how to behave yourself; as it is, you deserve to give up that book as a punishment for your sauciness.' Phcebe grasped the book tighter, and her eyes flashed. At the moment she did not fear Eustace ; she started up from the chair with an instinctive desire to prevent Blanche being included in the quarrel. We got the book, and were not interfering with you. You call us fools of girls ; why do you follow us ? What right have you to take the book ?'—' Because I want it, and you're a cheeky little beast,' said Eustace.—' Oh! give it him, Phcebe, and let us go away,' said Blanche.—' You don't want the book, you won't read a word in it,' said Phcebe, 'and you're nothing bat a coward, for if Will—' The rest of the sentence AM not finished, except by a sounding box on the ear, which made Phcebe stagger. She clutched the book tighter, however, and made no sound of pain. Blanche was at her side, drag- ging her away towards the door. Blanche said nothing. She fixed her large eyes on Eustace as if he had been an ugly and noxious animal. 'Come upstairs,' she said to Phcebe. 'You are not allowed to come into our bed-room,' she said coldly, to her brother, as she followed Phcebe out of the room. That evening at dinner a little scene occurred which made Master Eustace repent his morning's exploit. He was seated at the table, where he had occupied a good deal of the conversation, and had shown off some of his schoolboy graces before the guests very much to his own satisfaction, when the two girls entered for dessert. Blanche took her place at her father's side, who, looking over the length of the table, deplored that there were none of her favourite sweetmeats. I know there are no candied cherries,' said Blanche, in her clear, slow tones, for Eustace gave Short sixpence to tell him where they were put, and he ate them all up before dinner.' Short was the page, who at the moment was retiring with the butler, but who now emerged, with his ingenuous countenance scarlet with injured innocence. 'Indeed, Sir, Master Eustace said he'd thrash me if I didn't tell him ; and please, Sir, he took the sixpence back again afterwards—'"

Will Marsland is not nearly so well sketched as Phcebe, and is indeed altogether a vague and not very interesting figure. But the rise and fall of the house of Burton is described with great skill, as is the lively good-nature and complete want of bottom about Will Burton, the short-lived millionaire, himself. Mrs.

Macdonell, however, should grasp the mere fact-framework of her story more strongly than she does. The reader is occasion- ally provoked by small inconsistencies. For instance, we are informed as follows, at the commencement, in relation to the Quaker meeting attended by the parents of the Quaker cousins :—

" Life, out of a convent, could scarcely be more secluded, more rigorously disciplined, than that which went on in the old-fashioned house of the draper of Snaresby. He and his wife made no acquaint- ances in the town. The meeting which they attended was many miles distant ; but even this was not a matter of regret to them, William Marsland going beyond most Friends' in the strictness of his views, and feeling little sympathy with the good-natured farmers and tradespeople who formed the little meeting at Hamden."

But a very little later on (p. 75) it appears that it was the Crank- ton, not the Hawden meeting, which the Marslands attended, and that there were some most cultivated and spiritual-minded mem- bers of it, with whom Mr. Marsland would certainly have felt the deepest sympathy. Again, when Will Marsland is sent to Scranton, it is represented as at such a distance from Asham, where his uncle and aunt live, that he does not once leave the manufactory

to go home for three years. And when he returns, it is said that he has been travelling "all day." But at the end of the novel, Scranton appears to be so near Asham that Phcebe goes over to spend the Sunday, as if it were no distance of magnitude at all. These are mere trifles, but they serve to show the readerthat Mrs. Macdonell grasps the characters of her story more clearly than she grasps the circumstances in which she decides to place them,—and is apt to forget what she has decided upon as regards the latter.

Take it all in all, however, Quaker Cousins is a very pleasant and very thoughtfully-told tale. It wants force of passion, but it has great beauty and pathos. It wants compression, but in return the side-sketches are admirable,—nothing could be better than the sketch, for instance, of Lady Wrexham and her two sisters,—and. from beginning to end the drawing is the drawing of a refined, a cultivated, and a penetrating mind.