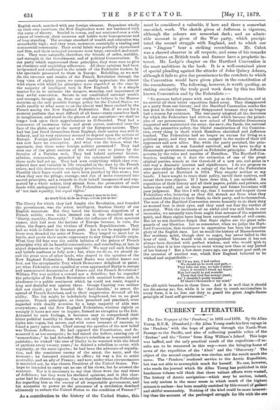 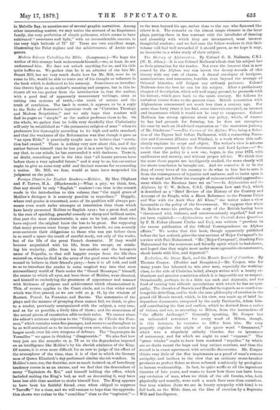 The Two Voyages of the Pandora,' in 1875 and 1876. By Sir Allan Young, R.N.R. (Stanford.)—Sir Allan Young made his first voyage in the 'Pandora' with the hope of getting through the North-West Passage to the Pacific, and also of collecting possible relics of the Erebas ' and the 'Terror' from King William's Island. This hope was baffled, and the only practical result of the expedition—if re- sults are to be measured in this way—were the bringing-home of news of the expedition of the 'Alert' and the Discovery.' The object of the second expedition was similar, and the result much the same. The 'Pandora' rendered service to the Arctic Expedition, but was not able to accomplish much for herself. No one, however, who reads the journal which Sir Allan Young has published in this handsome volume will think that these valiant efforts were wasted. The history of Arctic navigation—which may be useless, indeed, but only useless in the same Renee in which much of the highest science is useless—has been sensibly enriched by this record of gallant and skilful seamanship. Nothing of the kind could be more interest- ing than the account of the prolonged struggle for life with the sea in Melville Bay, to mention one of several graphic narratives. Among other interesting matter, we may notice the account of an Esquimaux family, the very perfection of simple politeness, which seems to have cultivated "sweetness and light," with no inconsiderable success, in the very high latitude of 77° 12' There are two excellent maps, illustrating the Polar regions and the achievements of Arctic navi- gators.