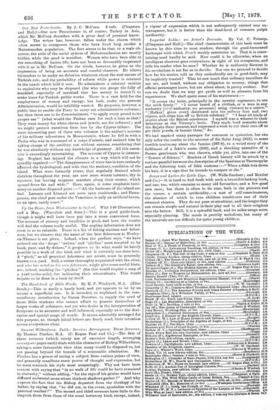 and Hall.)—Our new Protectorate is, of course, Turkey in Asia, which Mr. McCoan describes with a great deal of personal know- ledge. The writer has, however, fallen under the charm which often seems to overpower those who have lived long amidst a Mahommedan population. The fact seems to be that, to a male ob- server, the evils of the social system of Mahommedanism are mostly hidden, while the good is manifest. Women who have been able to see something of harem life, have not been so favourably impressed with it as is Mr. McCoan. On the whole, however, he gives us the impression of being an accurate and careful observer. He allows his readers to be under no delusion whatever about the real nature of Turkish rule, and the probability of reform while power is retained in the hands which hold it now. He administers a salutary caution to capitalists who may be disposed (for who can gauge the folly of mankind, especially of mankind that has money to invest?) to make loans for Turkish public works. There is a vast field for the employment of money and energy, but both, under the present Administration, would be infallibly wasted. He proposes, however, a public loan to enable the Porte to carry out administrative reforms ; but then there are to be Commissioners, "to apply every pound to its proper use" (what would the Pashas care for such a loan as that ? They want money for white slaves and jewels, not for reforms) ; and we might protect ourselves from loss by the Cyprus tribute. The most interesting part of these two volumes is the author's account of his military adventures in Mesopotamia, where he fell in with a Pasha who was in command of a corps d'armee, and assisted him by taking charge of the artillery, not without success, considering that

he was absolutely without any knowledge of gunnery. All this narra- tive is exceedingly entertaining. The account of Cyprus is interest- ing. Neglect has injured the climate in a way which will not be speedily repaired :—" The disappearance of trees has in turn seriously affected the hydrological, and with that the sanitary, condition of the island. What were formerly rivers, that regularly drained whole districts throughout the year, are now mere winter torrents, dry in summer, but leaving stagnant marshes along their course, which spread fever far and wide." Here, again, is some emphatic testi- mony on another disputed point :—" All the harbours of the island are bad. Larnaca and Limasol are mere open roadsteads ; and Fama- gousta, the chief port under the Venetians, is only an artificial haven, on an open, sandy coast."