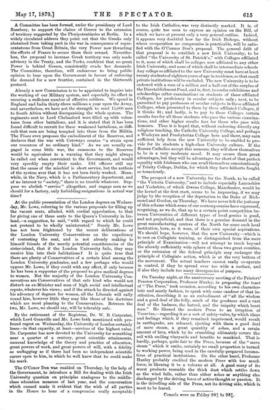 Page 3, 17 May 1879 — At the public presentation of the London degrees on Wednes-
Close

At the public presentation of the London degrees on Wednes-

day, Mr. Lowe, referring to the various proposals for filling up the vacant seats, alluded, with cordial approbation, to that for giving one of these seats to the Queen's University in Ire- land,—a suggestion, he said, "with regard to which he could not pretend to be wholly" uninterested." Surely Mr. Lowe has not been frightened by the recent deliberations of the London University Conservatives on the expediency of contesting the seat, and is not already making to himself friends of the merely potential constituencies of the sister-island, that if the London University fails, they may receive him into their habitations ? It is quite true that there are plenty of Conservatives of a certain kind among the London University graduates, and a few perhaps who would oppose Mr. Lowe, if they could with any effect, if only because he has been a supporter of the proposal to give medical degrees to women. But the majority of the London University Con- servatives are Conservatives of that safe kind who would not disturb an ex-Minister and man of high social and intellectual repute, whatever his views; and if the attack be directed against his advocacy of degrees for women, all the Liberals will rally round him, however little they may like those of his doctrines which are most pleasing to the Conservatives. Between the t wo, Mr. Lowe, we should say, will be tolerably safe.