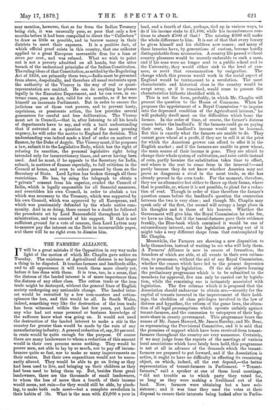 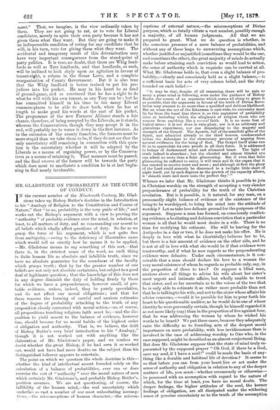 IT will be a great mistake if the Opposition in any way make light of the motion of which Mr. Chaplin gave notice on Tuesday. The existence of Agricultural distress is no longer a thing to be disputed. It touches farmers and landlords alike, and to all appearance it will touch them more closely yet, before it has done with them. It is true, too, in a sense, that the distress of the landed interest is of more importance than the distress of any other class. The cotton trade or the iron trade might be destroyed, without the general lines of English society undergoing any noticeable change. The landed inter- est would be recruited by a few iron-masters and cotton- spinners the less, and this would be all. In South Wales, indeed, something very like the destruction of the iron trade has been witnessed within the last few years, yet hardly any who had not some personal or business knowledge of the sufferers knew what was going on. It would not need the destruction of the landed interest to make a stir in the country far greater than would be made by the ruin of any manufacturing industry. A general reduction of, say, 30 per cent. in rents would be quite enough for the purpose. Of course there are many landowners to whom a reduction of this amount would in their own persons mean nothing. They would be poorer men, not able to lay by so much, nor to pay off incum- brances quite so fast, nor to make so many improvements on their estates. But their own expenditure would not be neces- sarily altered. They would be able to go on living as they had been used to live, and bringing up their children as they had been used to bring them up. But, besides these great landowners, there are the thousands of small landowners, to whom the loss of more than a fourth of their income would mean, not ruin—for they would still be able, by pinch- ing, to make both ends meet—but a complete revolution in their habits of life. What is the man with £2,000 a year in land, and a fourth of that, perhaps, tied up in various ways, to do if his income sinks to £1,400, while his incumbrances con- tinue to absorb £500 of that ? The missing £000 will make the whole difference to him. It is out of that that every luxury he gives himself and his children now comes ; and many of these luxuries have, by generations of custom, become hardly distinguishable from necessaries. A country life passed without country pleasures would be scarcely endurable to such a man, and if his sons were no longer sent to a public school and to the University, they would either sink to the level of yeo- men, or avert that consummation by emigration. The change which this process would work in the social aspect of England would be tantamount to a revolution. The most characteristic and historical class in the country would be swept away, or if it remained, would cease to possess the characteristics hitherto identified with it.

This is not the form, probably, in which Mr. Chaplin will present the question to the House of Commons. When he proposes the appointment of a Royal Commission "to inquire into the depressed condition of the Agricultural interest," he will probably dwell most on the difficulties which beset the farmer. In the order of time, of course, the farmer's distress comes before the landlord's. If the farmers could go on paying their rent, the landlord's income would not be lessened. But this is exactly what the farmers are unable to do. They cannot grow wheat at a profit, if they are to sell it at the price for which the American grower can afford to offer it in the English market ; and if the farmers are unable to grow wheat, the main source of their income is gone. They are afraid to change their whole system of cultivation, and raise cattle instead of corn, partly because the substitution takes time to effect, and where is the rent to come from in the interval ?—and partly because they do not know whether America may not prove as dangerous a rival in the meat trade, as she has already proved in the corn trade. For the moment, therefore, they see no alternative but either to throw up their farms, where that is possible, or, where it is not possible, to plead for a reduc- tion of rent. Though in order of time therefore the farmer's question comes before the landlord's question the connection between the two is very close ; and though Mr. Chaplin may speak only of the first, the second will occupy a large place in his thoughts and in those of his hearers. Whether the Government will give him the Royal Commission he asks for, we have no idea, but if the tenant-farmers gave their evidence frankly, the Blue-book which contained it would be one of extraordinary interest, and the legislation growing out of it might take a very different shape from that contemplated by Mr. Chaplin.

Meanwhile, the Farmers are showing a new disposition to help themselves, instead of waiting to see who will help them.

A Farmers' Alliance is now in course of formation, the founders of which are able, at all events in their own estima- tion, to pronounce, without the aid of any Royal Commission, whether the causes which have led to the present depression can be remedied by legislation. Of the six objects forming the preliminary programme which is to be submitted to the members for approval, five can only be carried out by legisla- tion, while the remaining one is intimately associated with legislation. The five reforms which it is proposed that the Association should endeavour to obtain are,—security for the capital of tenants invested in the improvement of their hold- ings, the abolition of class privileges involved in the law of distress and hypothec, the reform of the game laws, the altera- tion of all legal presumptions which operate unfairly against tenant-farmers, and the concession to ratepayers of their legi- mate share in county government. This programme bears the names of Mr. James Howard, Mr. James Barclay, and Mr. Bear, as representing the Provisional Committee, and it is said that the promises of support which have been received from tenant- farmers throughout the country are very numerous. Certainly, if we may judge from the reports of the meetings of various local associations which have lately been held, this programme is not at all in advance of the demands which the tenant- farmers are prepared to put forward, and if the Association is active, it ought to have no difficulty in effecting its remaining object, on which, indeed, all the rest depend,—the better representation of tenant-farmers in Parliament. "Tenant- farmers," said a speaker at one of these local meetings, "did not trouble as to which party they voted for, as long as they were making a livelihood out of the laud. Now, farmers were obtaining but a bare sub- sistence; and it was time they used the votes at their disposal to ensure their interests being looked after in Parlia- ment." That, we imagine, is the view ordinarily taken by them. They are not going to rat, or to vote for Liberal

candidates, merely to spite their own party because it has not given them what they want. But they are going to make it an indispensable condition of voting for any candidate that he

will, in his turn, vote for giving them what they want. The accidental and temporary result of this determination may have very important consequences from the stand-point of party politics. It is true, no doubt, that there are Whig land- lords as well as Tory landlords, and that landlords, as such, will be inclined to look shyly upon an agitation in favour of tenant-right, a reform in the Game Laws, and a complete reorganisation of County Government. But it is also true that the Whig landlord is better trained to put his pre- judices into his pocket. He may in his heart be as fond of ground-game, and as convinced that he has a right to do what he will with his own tenant, as any Tory can be ; but he has committed himself in his time to too many Liberal common-places to be able to draw back, when he has at length to make good his words at the cost of his pocket. The programme of the new Farmers' Alliance stands a fair chance, therefore, of being accepted by the Liberals, as it stands, whereas the Conservatives, though they may accept it in the end, will probably try to water it down in the first instance. As to the extension of the county franchise, the farmers must be more stupid than we take them to be, if they do not see that the only uncertainty still remaining in connection with this ques- tion is the uncertainty whether it will be adopted by the Liberals as a means of regaining power, or by the Conserva- tives as a means of retaining it. That measure must be passed, and the final swerve of the farmer will be towards the party which does most to ameliorate a condition he is at last begin- ning to find nearly intolerable.