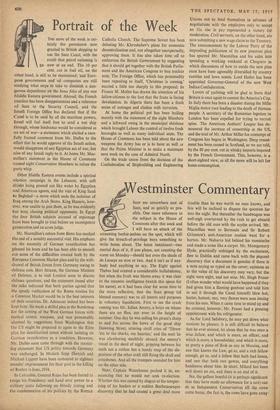 THE news of the week is cer- tainly the permission now granted to British shipping to use the Suez Canal, with the result that petrol rationing is now at an end. The 10 per cent. cut in fuel oil, on the other hand, is still to be maintained; -and Euro- pean governments and oil companies are still studying what steps to take to diminish a dan- gerous dependence on the bona fides of any one Middle Eastern government. Abroad, the French reaction has been disappointment and a reference of Suez to the Security Council, and the Israeli Foreign Office has declared that if the Canal is to be used by all the maritime powers, Israel will feel itself free to send a test ship through, whose hindrance would be considered as an act of war—a statement which elicited a care- fully framed comment from Mr. Dulles to the effect that he would approve of the Israeli action, 'would disapprove of any Egyptian act of war, but also of any Israeli reply to it. At home Mr. Mac- millan's statement in the House of Commons caused eight Conservative Members to refuse the party whip.

Other Middle Eastern events include a spirited election campaign in the Lebanon, with soft drinks being poured out like water by Egyptian and American agents, and the visit of King Saud to Baghdad—a move which ends the isolation of Iraq among the Arab States. King Hussein, how- ever, was unable to join them, as he was evidently too busy chasing political opponents. In Egypt the four British subjects accused of espionage have been brought to trial before an incompetent prosecution and an acute judge.

Mr. Macmillan's return from Bonn has marked the end of a notably successful visit. His emphasis on the necessity of German reunification has pleased his hosts and he has been able to smooth out some of the difficulties created both by the European Common Market plan and by the with- drawal of British forces from Germany owing to defence cuts. Herr Strauss, the German Minister of Defence, is to visit London soon to discuss defence questions, and the statement issued after the talks indicated that both parties agreed that the speedy ratification of the Rome treaties for a Common Market would be in the best interests of their countries. Dr. Adenauer indeed has been kept busy. He made a skilful plea in the Bundestag for the arming of the West German forces with tactical atomic weapons, and was presumably alarmed by suggestions from Washington that the US might be prepared to agree to the Eden plan for demilitarised zones without insisting on 'German reunification as a condition. However, Mr. Dulles soon came through with the reassur- ing statement that US policy towards Germany was unchanged. In Munich Sepp Dietrich and Michael Lippert have been sentenced to eighteen months' imprisonment for their part in the killing of Roehm :n June, 1934.

In Columbia, General Rojas has been forced to resign his Presidency and hand over power to a military junta following on bloody rioting and the condemnation of his policies by the Roman Catholic Church. The Supreme Soviet has been debating Mr. Khrushchev's plans for economic decentralisation and, not altogether unexpectedly, approving them. It has also taken time off to embarrass the British Government by suggesting that it should get together with the British Parlia- ment and the American Congress to ban nuclear tests. The Foreign Office, which has presumably been repeating to itself, 'Christmas is coming,' reacted a little too sharply to this proposal. In France M. Mollet has drawn the attention of his fellow-citizens to the fact that the franc is facing devaluation. In Algeria there has been a fresh series of outrages and clashes with terrorists.

At home the political pot has been boiling merrily with the statement of the eight Members and a leftward swing in the municipal elections which brought Labour the control of twelve fresh boroughs as well as many individual seats. The House of Commons has been told about the new weapons the Army has or is to have as well as that the Prime Minister is to make a statement next week on the case of Admiral North.

On the trade union front the decision of the Confederation of Shipbuilding and Engineering Unions not to bind themselves in advance of negotiations with the employers only to accept an 1 Is. rise in pay represented a victory for moderation. Civil servants, on the other hand, are now submitting a new wage claim to the Treasury. The announcement by the Labour Party of the impending publication of its new pensions plan has spurred Mr. Macmillan and his aides into spending a working weekend at Chequers in which discussions of how to outdo the new plan must have been agreeably diversified by country rambles and lawn tennis. Lord Hailes has been appointed Governor-General of the new West Indian Confederation.

Lovers of yachting will be glad to learn that Britain is once again to contest the America's Cup. In Italy there has been a disaster during the Mille Miglia motor race leading to the death of thirteen people. A secretary of the Rumanian legation in London has been expelled for trying to recruit spies. The American Authors' League has de- nounced the increase of censorship in the US, and the trial of Mr. Arthur Miller for contempt of Congress has begun in Washington. Deep resent- ment has been caused in Scotland, so we are told, by the 80 per cent, cut in whisky imports imposed by the French Government. This, however, is a short-sighted view, as all the more will be left for home consumption.