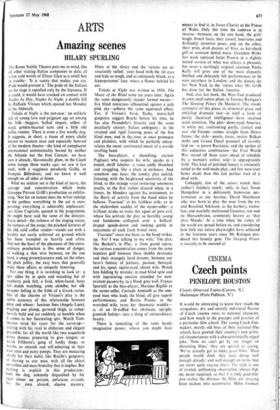 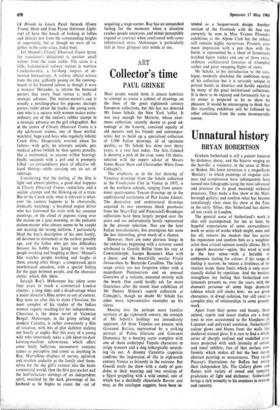 Closely Observed Trains (Curzon, 'X') Mahanagar (Paris Pullman, 'U') It would be interesting to know how much the scrupulous, dry and entirely individual flavour of Czech cinema owes to national character, and how much to the precepts and practice of a particular film school. The young Czech film- makers, mostly old boys of their national film school, have greeted their country's new politi- cal circumstances with a characteristically edged joke. 'Now we can't get by any longer on dissenting films,' they are quoted as saying. `We've actually got to make good films.' Most people would think they were doing well enough already; and well enough on terms that are never quite anyone else's. The style is one of riveted, unblinking observation, always Pat- on, never surprised, so that it is only gradmily you realise the distance the films are straying from realism into eccentricity. Milos Forman (A Blonde in Love), Pavel Juracek (Every Young Man) and Ivan Passer (Intimate Light- ing) all have this knack of looking at follies and idiocies not from the commanding heights of superiority, but as though we were all to- gether in the same crazy, leaky boat.

Jiri Menzel's Closely Observed Trains (prize for translator's defeatism) is another small winner from the same stable. The scene is -a little, lackadaisical railway station in wartime Czechoslovakia, a far-flung outpost of de- mented bureaucracy. A railway official arrives from the city, gallantly posing on the running- board of his battered saloon as though it were a monster Mercedes, to inform the bemused porters that every Nazi retreat is really a strategic advance. The station-master's cap is usually a perching-place for pigeons; decrepit porters totter about the tracks; the young assis- tant who is a success with women makes extra- ordinary use of the station's rubber stamps in a strategic advance on the girl telegraphist. But at the centre of Closely Observed Trains is a shy adolescent trainee, one of those wistful, watchful, huge-eyed boys who regularly inhabit Czech films. Desperately worried about his failures with girls, he attempts suicide, gets medical advice (which he then quotes proudly, like a testimonial, to anyone within hearing), finally succeeds with a girl and is promptly killed—an extraordinary piece of effective off- hand filming—while carrying out an act of sabotage.

Considering that the feeling of the film is light and almost plotless, a good deal happens in Closely Observed Trains—seductions and a suicide attempt and the blowing-up of a train. But in the Czech style, what is relevant is what- ever the camera happens to be obsessively, ironically watching: a becalmed engine driver who has festooned his train with his amateur paintings, or the cloud of pigeons rising over the station on a grey morning, or the pedantic station-master who always seems to be caught out wearing the wrong uniform. I particularly liked the boy's description of his own family, all devoted to retirement at the earliest possible age, and the father who got into difficulties because his hobby was 'going out to watch people working and laughing at them.' Menzel's film watches people working and laughs at them, among other things: a compressed, quite unwhimsical anecdote, with a special feeling for the gaps between people, and the obsessive clutter which fills them.

Satyajit Ray's Mahanagar has taken some four years to reach a commercial London cinema: a long time, and a disadvantage when a major director's films arrive so out of context. Ray went on after this to make Charulata, the most complex of his studies of the Indian woman vaguely reaching for her independence. Charulata is the dense novel of Victorian Bengal; Mahanagar, in the grimy setting of modern Calcutta, is rather consciously a film of situation, with bits of plot skeleton sticking out bonily at angles. But this story of a young wife who timorously takes a job (door-to-door knitting-machine saleswoman, which offers some finely ludicrous encounters) contains scenes as perceptive and comic as anything in Ray. Marvellous displays of nerves, agitation and resolute audacity as the family steel them- selves for the shy girl's venture into the brute commercial world; then the first pay-packet and the half-reluctant stirrings of an independent spirit, matched by the dark gloomings of the husband as he begins to count the cost of acquiring a wage-earner. Ray has an unmatched feeling for the moments when a situation catches people unawares, and minds perceptibly expand or contract when confronted with some infinitesimal stress. Mahanagar is particularly rich in these glimpses into minds at sea.