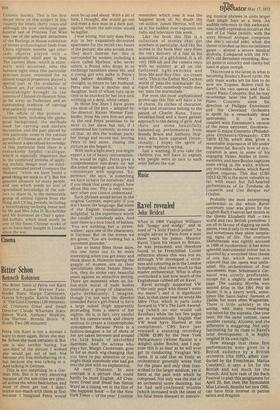 The Bitter Tears of Petra von Kant Director: Rainer Werner Fassbinder Stars: Margit Carstensen, Hanna Schygulla, Katrin Schaake 'X' The Gate Cinema (120 minutes). All Creature.; Great and Small Director: Claude Whatham Stars: Simon Ward, Anthony Hopkins, Lisa Harrow, Brenda Bruce 'A' Studio Two (90 minutes) Petra von Kant is not a woman I want to meet again. Bitter she may be. Schon she most certainly is. But she is also terribly boring. For one-third "of the picture I wished she would get out of bed. Not because she was misbehaving in it, but because she was talking in it. And talking in German.

This is not surprising in a German film. But it is very annoying because all the sub-titles are printed across the white bedclothes, and most of them get lost. I didn't bother too much with them at first because I imagined Petra would soon be up and about. With a bit of luck, I thought, she would go out and meet a nice man in a dark suit, against whom the sub-titles would be legible.

I was wrong. Not only does Petra stay in her exquisitely-decorated apartment for the entire two hours of the picture; she also avoids men. They don't interest her. She is surrounded by women, including a slave called Marlene, who never utters; a friend who drops in to exchange banalities about life, and a young girl who sulks in Petra's bed before deciding, wisely I thought, to return to her husband. Petra also has a mother and a daughter, both of whom turn up in time to be shocked by her love-sick writhing on a deep, white carpet.

In those few lines I have given you most of the plot — adapted by the director, Rainer Werner Fassbinder, from his own five-act play. At the end Petra promises to be nicer to her slave but not, if I understood her correctly, as nice as all that. At this the woman packs her things and moves out, leaving Petra in bed alone, closing the picture as she began it.

With such a light story you might expect a lot of heavy conversation. You would be right. Petra gives a comprehensive run-down on her discarded marriage and litters her commentary with epigrams. 'Experience,' she says, 'is something we have to have for ourselves.' And if you think that pretty stupid, how about this one. 'Pity is only necessary when you cannot understand.'

Such phrases sound better in the original German, especially if you don't know the language. But some of the English translations are delightful. 'Is the experience worth the candle?' somebody asks. And later there is a nice touch of bathos. You are nothing but a streetwalker,' says one of the characters, in German. But on the screen we are given, 'You are nothing but a pavement pounder.'

Like so many films these days, this one turns out to be more interesting when you get away and think about it. However boring the gaggle of women are in their speculations about female liberation, they do strike very beautiful poses against an attractive setting. There are .moments when an Italian-style mural of nude bodies dominates a group of characters. Quite deliberately, I imagine, though I'm not sure the director intended Petra's girl-friend to have a large naked thigh apparently protruding from a sleeve of her nightie. He is, in fact, very careful with his camera-work and clearly anxious to create a claustrophobic atmosphere. Because Petra is a fashion-designer a lot of shots of her are taken between and around the bald heads of unclothed dummies. And the actress who plays her, Margit Carstensen, goes in for so much wig-changing that you have to pay attention or you might think somebody else had got into the plot with no explanation. All very Teutonic. In nice contrast is a picture that could hardly be more English. All Creatures Great and Small has Simon Ward as a young vet in the film of 'the happiest book' — for the New York Times — 'of the year.' I cannot remember which year it was the happiest book of. No doubt the vet-author, James Herriot, will tell us in his sudden over-exposure on radio and television this week.

Like the book this film is a collection of stories that get nowhere in partieular. And like the stories in the book they vary from the vet's delivery of a foal to his acquisition of a girl-friend. It is all very 1930-ish and the camera rests with no subtlety at all on oldfashioned light-switches and Stop-Me-and-Buy-One ice-cream carts. This is the Esther McCracken world of 'pass-the-marmalade' dialogue. In fact, somebody really does say 'pass the marmalade.'

For even the most sophisticated grown-ups this film will have a lot of charm. Its cliches of character, script and situations belong to the period of Charlie Kunz, 'Force' breakfast-food and a more gallant approach to the dating of girls. And there are some beautifully hammed-up performances from Brenda Bruce and Anthony Hopkins, who have captured (inten,tionally, I hope) the spirit of pre-war repertory acting.

Just a warning. If you take the children you will have to explain why people were so nice to each other before the war.