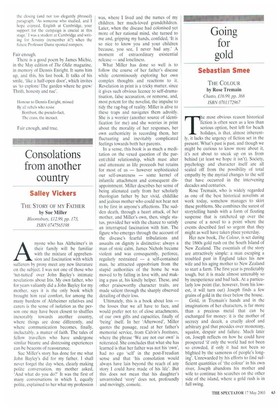 Consolations from another country

THE STORY OF MY FATHER by Sue Miller Bloomsbury, £12.99, pp. 173, ISBN 0747565198 Anyone who has Alzheimer's in their family will be familiar with the mixture of apprehension and fascination with which sufferers by proxy meet any new literature on the subject. I was not one of those who 'tut-tutted' over John Bayley's intimate revelations about Iris. My own father, who for years valiantly did a John Bayley for my mother, says it is the only book which brought him real comfort, for among the many burdens of Alzheimer relatives and carers is the sense of isolation as the person one may have been closest to shuffles inexorably towards another country, where things are done differently, and where communication becomes, finally, ineluctably, a matter of faith. The tales of fellow travellers who have undergone similar bizarre and distressing experiences can be beacons of reassurance.

Sue Miller's story has done for me what John Bayley's did for my father. I shall never forget the day when, clearly making polite conversation, my mother asked, 'And what do you do?' It was the first of many conversations in which I, equally polite, explained to her what my profession

was, where I lived and the names of my children, her much-loved grandchildren.

Later, when the disease had colonised yet more of her rational mind, she turned to

me and, gripping my hands, confided, `It is so nice to know you and your children because, you see, I never had any.' A moment of extraordinary existential release — and loneliness.

What Miller has done so well is to follow the course of her father's disease while coterminously exploring her own complex thoughts and reactions to it. Revelation in print is a tricky matter, since it gives such obvious licence to self-drama tisation, false accusation, or remorse, and, most potent for the novelist, the impulse to tidy the rag-bag of reality. Miller is alive to these traps and navigates them adroitly. She is a worrier (another source of identi fication for me) and she worries in print about the morality of her responses, her own authenticity in recording them, her fluctuating and inevitably complicated feelings towards both her parents.

In a sense, this book is as much a meditation on the vexed question of the par ent/child relationship, which must alter and attenuate as life proceeds but retains for most of us — however sophisticated our self-awareness — some kernel of infantile attachment and consequent disappointment. Miller describes her sense of being alienated early from her scholarly theologian father by her vivid, childlike and jealous mother who could not bear not to be first in anyone's affections. The sud den death, through a heart attack, of her mother, and Miller's own, then, single sta tus, provided her with the chance to satisfy an interrupted fascination with him. The figure who emerges through the account of the disease's fearful tribulations and assaults on dignity is distinctive: always a man of stoic calm, James Nichols became violent and was consequently, perforce, regularly restrained — a self-contained man, he attracted opprobrium from the stupid authorities of the home he was moved to by falling in love with, and making a pass at, his kindly helper. These, and other praiseworthy character traits, are made salient through the sharply observed detailing of their loss.

Ultimately, this is a book about loss — the losses that we all have to face, and would prefer not to: of close attachments, of our own gifts and capacities, finally of 'being' itself. In her `Afterword', Miller quotes the passage, read at her father's

memorial service, from Calvin's Institutes, where the phrase 'We are not our own' is

reiterated. She concludes that what she has learned is that her father was not his 'own', had no ego 'self' in the post-Freudian sense and that `his consolation would always have lain beyond the reach of any story I could have made of his life'. But this does not mean that his daughter's unvarnished 'story' does not, profoundly and movingly, console.