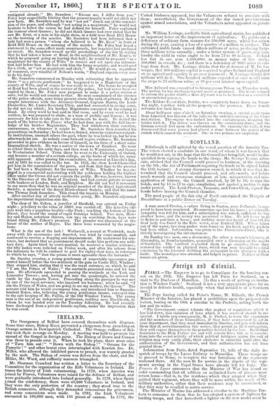 Edinburgh is still agitated by the vexed question of the Annuity Tax. The voters elected a candidate in one ward, of whom it was known that ho would not act, in the hope that the Council not being full, would be dis- qualified from signing the bonds to the clergy. Mr. George Young, advo- cate, advised that the Council could proceed to business, at the meeting on the 0th; the Act of Parliament requiring the bonds to be signed before the 11th instant ! A stormy discussion ensued, in which it was first de- termined that the Council should proceed, and afterwards, not before much warmth and erroneous statement of law, misquotation and mis- application of history, the Council resolved, by 20 to 10, to sign the bonds, and by 15 to 12 to sign, simpliciter, and against a motion to sign under protest. The Lord-Provost, Treasure, and Town Clerk, signed the bonds before leaving the Council chamber.

The good people of the fair city of Perth entertained the Marquis of Breadalbanc at a public dinner on Tuesday.

A man named Crosier, a cadger living in Santon, near Tedburgli, is sup- posed to have been murdered. He sometime ago lost his horse ; considerable sympathy was felt for him, and a subscription was raised, sufficient to buy another horse, and the money was presented to him. He left home to go to Kelso to purchase a horse ; and nothing more was heard of him till his dead body was found in the Kale water, near Eckford Mill. W hen taken out of the water, two deep gashes were found on his head, and his pockets had been rifled. Information was given to the l'rocurator-Fiscal, who is strictly investigating the circumstances.

On Sunday two men one a shoemaker, the other a mason's labourer, at Alexandria, in Dumbalkonshire, quarrelled over a discussion on the merits of Garibaldi. The landlord requested them to go outside ; there they renewed the conflict in physical force, which was soon brought to a fatal conclusion by the labourer stabbing his antagonist in the abdomen with a knife. The manslayer was arrested, and lodged in prison. Neither of their names are given.