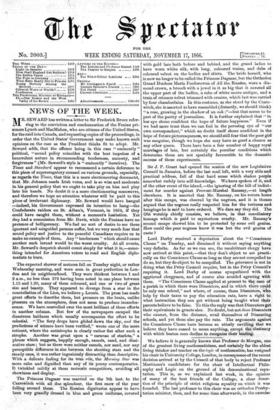 Page 1, 17 November 1866 — The expected shower of meteors fell on Tuesday night, or
Close

The expected shower of meteors fell on Tuesday night, or

rather Wednesday morning, and were seen in great perfection in,Lon- don and its neighbourhood. They were thickest between 1 and 2 a.m., no leas than 276 having been noted in one place between 1.15 and 1.20, many of them coloured, and one or two of great size and beauty. They appeared to diverge from a star in the constellation of the Lion, we believe 7 Leonia. The press has made great efforts to describe them, but pressure on the brain, unlike Treasure on the atmosphere, does not seem to produce incandes- cence. We have marvelled over the most brilliant of these efforts in another column. But few of the newspapers escaped the disastrous baldness which usually accompanies the effort to be celestial. "The fiery drops have glided down the sky, and the predictions of science have been verified," wrote one of the more reticent, where the antistrophe is clearly rather flat after such a strophe. Another was great upon a "caravan of starlets," a phrase which suggests, happily enough, camels, sand, and dimi- nutive stars ; but as there were neither camels, nor sand, nor any perceptible difference in size between the shooting stars and the steady ones, it was rather ingeniously distracting than descriptive. With a delicate feeling for its true role, the Morning Star was more calm and dignified than any of its penny contemporaries. It twinkled mildly at these meteoric competitors, avoiding all showiness and display.