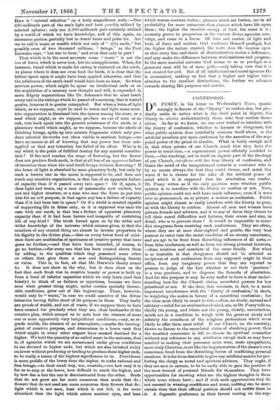 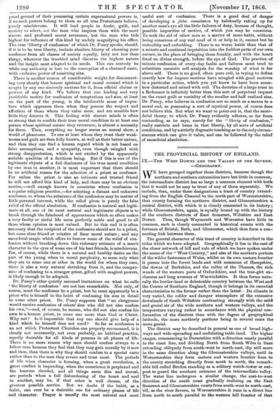 DR. P USEY, in his letter to Wednesday's Times, speaks strongly in favour of the "liberty" to confess sins, but pru- dently omits to notice what is the chief point in dispute, the liberty to absolve authoritatively those who thus confess them- selves. As far as we know, no one ever wished to interfere with the liberty of confession, whether to laymen or clergymen, but what public opinion does justifiably concern itself about, is the artificial premium put upon confession by the assertion of the sup- posed power of the priest to absolve. What is fairly enough said is, that when priests of our Church teach that they have the power to remit sins,—a supernatural power officially confided to them,—this teaching, not in itself an organic part of the theology of our Church, interferes with the true liberty of confession, and biases the mind of the inexperienced towards a confessor who is by no means always the best they could choose, and much the worst if he is chosen for the sake of the artificial peace of mind which it is supposed that his absolation can confer. Dr. Pusey writes as if the only question were whether public opinion is to interfere with the liberty to confess or not. Now, public opinion could not well have much influence, even if it were ever so pronounced, on so private a matter-as confession. Public opinion might almost as easily interfere with the liberty to pray, as with the liberty to confess. Almost all men and women have private friends and advisers, and if to any of these they choose to tell their moral difficulties and failures, their errors and sins, in detail, who is to prevent them ? It would be impossible to inter- dict clergymen from receiving such confessions. They are °Nen, where they are at once clear-sighted and gentle, the 'very beat persons to enter into the moral condition of an uneasy conscience, and are apt to be freer from disturbing influences of all sorts,.— from false tenderness, as well as from too 'strong personal interests, —than relatives and members of the same family. But what is so desirable is that clergymen should not be selected as recipients of such confessions from any supposed magic in their office, from any imaginary power that they ane reputed to possess to judge of the fact whether or not their 'penitent' is a true penitent, and to dispense the formula of absolution. And for this purpose it may be very useful to have a clear under- standing how far the Church claims sacerdotal powers for her priesthood or not. If she does, that amounts, in fact,' to 'a most important interference with the liberty of confession,' in short, to weighting the scales in favour of a sacerdotal confeaden ; for the class most likely to resort to this—often, no doubt, natural and salutary—relief for an overburdened mind, are, asDr. Puaeytells us, chiefly the young, and where not the young, clearly, nevertheless, minds not in a condition to weigh with the greatest nicety and sobriety the soundness of the religious pretensions which seem likely to offer them most relief. If our Church, on the contrary, shows no favour to the sacerdotal claim of absolving power, then the troubled conscience is left to choose its spiritual counsellor without any reference to any attributes except 'such as may have resulted in making their possessor more wise, more sympathetic, more truly Christian,more like the impersonation of the sinner's own conscience freed from the disturbing forces of confiinthsg personal emotions. It is far from desirable to give any artificial motive for pre- ferring the clergy as moral and spiritual advisers. They ought, if they are men in earnest, to be be easily able to gain the position of the most trusted of personal friends for themselves. They have opportunities for showing what are the highest-thoughts in them which none others have ; and if with such opportunities they do not succeed in winning confidence and -trust, nothing elm be more certain than that their official position should not entitle them to it. A dogmatic preference in their favour resting on the sup-

posed ground of their possessing certain supernatural powers is, if no such powers belong to them as all true Protestants believe, purely mischievous. It will lead people in doubt, guilt, and anxiety to select, not the man who inspires them with the most sincere and profound moral reverence, but the man who bids highest for influence of this kind by unduly magnifying his office. The true 'liberty of confession' of which Dr. Pusey speaks, should, if it is to be true liberty, include absolute liberty of choosing your confessor from all classes of society equally, laity not less than clergy, wherever the troubled mind discerns the highest nature and the insight most adapted to its needs. This can scarcely be while any authority is lent to the conception of a charmed caste, with exclusive power of remitting sins.

There is another reason of considerable weight for disconnect- ing very clearly that honest spiritual and moral counsel which is sought by any one sincerely anxious for it, from official claims or powers of any kind. We believe that one leading and very justifiable motive for confession of temptations and sins, at least on the part of the young, is the intolerable sense of impos- ture which oppresses them when they possess the respect and affection of those whom they value most, and are sensible how little they deserve it. This feeling with sincere minds is often so strong that to confide their true moral condition to at least one person whose spiritual nature they reverence, is almost a necessity ' for them. Then, everything no longer seems an unreal show, a world of phantoms. To one at least whom they trust their weak- nesses and guilt are then fully known, as well as their better nature, and thus they can find a human regard which is not based on false assumptions, and a sympathy, even though mingled with strong disapprobation, which is not excited by the apparently amiable qualities of a fictitious being. But if this is one of the legitimate objects of a full disclosure of his true moral condition by one man to another, it is most important that there should be no artificial reason for the selection of a priest as confessor. For unless the priest is also an intimate and trusted friend he will not afford this kind of help, and there may be an obvious motive,—well enough known in countries where confession is a regular religious practice,—for selecting a distant and unknown confessor, to whom the substance of the confession may be matter of little personal interest, while the relief given is purely the false relief of the official absolution. If confession is natural and legiti- mate at all, one of its most natural and legitimate objects is to break through the falsehood of appearances which so often makes a very faulty or sinful life seem perfectly noble and good to all those whose opinion is most valued. But to this end it is often necessary that the recipient of the confession should not be a priest, but some close friend or relative of finer moral nature ; and any sacerdotal magic which offers to bestow some of the relief of con- fession without breaking down this visionary estimate of a man's character in the eyes of some one of his best friends, is mischievous. For, of course, while there is a natural and healthy desire on the part of the young when in moral perplexity, to seem only what they are to some one or other in the world for whom they care, there is also a very natural shrinking from it, and the compro- mise of confessing to a stranger priest, gifted with magical powers, is likely enough to be adopted.

Dr. Pasey's other quietly assumed limitations on what he calls 'the liberty of confession' are not less remarkable. Not only, of course, must the confessor be a priest, but he must apparently be a priest who is himself in the habit of confessing his sins in detail to some other priest. Dr. Pusey supposes that "no clergyman would receive confession of others' sins who did not also confess his own,"—and, of course, he means, who did not also confess his own to a human priest, to some one more than God or Christ. Why not? Is it impossible that any one should give help of a kind which he himself does not need? So far as confession is an act which Protestant Churches can properly recommend, it is clearly not necessarily, not even probably, an habitual practice, equally desirable for all kinds of persons in all phases of life. There is no more reason why men should confess always to a fellow-man because they feel that they may gain morally by it now and then, than there is why they should confess to a special caste rather than to the man they revere and trust moat. The periods of life when character is forming, when a great revolution, a great conflict is impending, when the conscience is perplexed and the heavens clouded, and all things seem dim and unreal, are periods when a full disburdening of the heart and soul to another, may be, if that other is well chosen, of the greatest possible service. But we doubt if the habit, as a habit, can ever be a desirable one for ordinary phases of life and character. Prayer is usually the most natural and most useful sort of confession. There is a good deal of danger of developing a false conscience by habitually raking up for another man's eye all the little failures of duty, licenses of thought, possible impurities of motive, of which you may be conscious. To seek the aid of other men as a matter of mere habit, without being conscious of any real need of it or help in it, cannot but be unhealthy and enfeebling. There is no worse habit than that of a minute and continual inquisition into the feeblest parts of our own nature, in the place of bringing them frankly, and with the heart fixed on divine strength, before the eye of God. The practice of minute confession of every-day faults and failures must tend to substitute casuistic self-analysis for the worship of what is far above self. There is no good, often pure evil, in trying to define exactly how far impure motives have Mingled with good motives. in a particular action, which you yet know to have been some- how distorted and mixed with evil. The doctrine of a large trust in a Redeemer is infinitely better than this sort of perpetual inquest. on the exact guilt or veniality of the smaller and half realized sins.- Dr. Pusey, who believes in confession not so much as a means to a. moral end, as possessing a sort of mystical power, of course does. not believe this. But what we want to point out is, that the sacer- dotal theory, to which Dr. Pusey evidently adheres, so far from contending, as he says, merely for the "liberty of confession," really restricts and hems in that liberty, by all sorts of artificial conditions, and by a strictly dogmatic teaching as to the onlycircum- stances which can give it value, and can be followed by the relief of sacerdotal absolution.