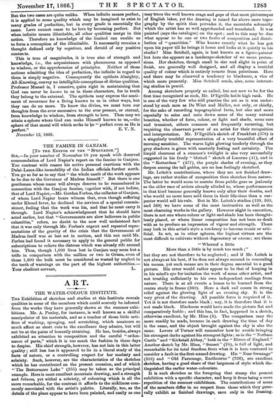 THE FAMINE IN GANJAM.

SIR,—In your number of November 10 you speak with deserved commendation of Lord Napier's report on the famine in Ganjam. You contrast with reason his active personal exertions with the Dalai-Lama-like immobility of the Indian officials further north. You go so far as to say that " the whole merit of the work appears to be due to the Governor of Madras himself." But there is one gentleman whose name will always deserve to be remembered in connection with the Ganjam famine, together with, if not before, that of Lord Napier,—Mr. Gordon Forbes, the collector of Ganjam, of whom Lord Napier bears witness that, even though suffering under lihond fever, he declined the services of a special commis- sioner, feeling that the work was his, and that he must carry it through. Lord Napier's acknowledgment that he should have acted earlier, but that "Governments are slow believers in public calamities," refers, no doubt to the now well understood fact that it was only through Mr. Forbes's urgent and repeated repre- sentations of the gravity of the crisis that the Government of Madras itself was at last set in motion, and this not until Mr. Forbes had found it necessary to apply to the general public for subscriptions to relieve the distress which was already rife around him. Thus, though 1,600 lives lost in Ganjam may seem but a trifle in comparison with the million or two in Orissa, even of these 1,600 the bulk must be considered as wasted by neglect in the teeth of warnings on the part of the highest authorities.—