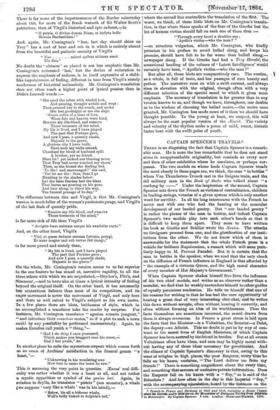 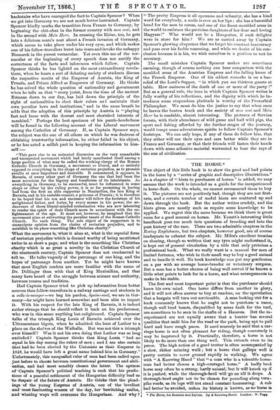 THERE is no disguising the fact that Captain Spencer is a remark- able man. He is none the less remarkable that-he 'does not stand alone in unapproachable originality, but reminds us every now and then of other celebrities whom he emulates, or perhaps sur- passes. The two models on whose heels Captain Spencer treads the most closely in these pages are, we think, the man" in-bottles " whom Von Thunderten-Tronck met in the Reigate train; and -the old military man in the Book of Snobs who talked about "a cordong by —." Under the-inspiration of the Second, Captain Spencer sets down the French as victims of centralization, children in leading-strings, votaries of -a given system which is only another word for servility. In all his long intercourse with the French he never met with one who had the bearing or the muscular development of our landed gentry. But "our landed gentry" is rather the phrase of the man in bottles, and indeed Captain Spencer's two models-play into each -other's hands so that it is difficult to keep them apart. They seem to have written his book as Goethe and Schiller wrote the Xenien. The attacks on foreigners proceed from one, and the glorification of our insti- tutions from the other. We do not know which of them is answerable for the statement that the whole Fretialt press is a -vehicle for brilliant Napoleonism, a remark which will seem peL%- liarly happy to M. Prevost Paradol. But it is certain that the man in bottles is the speaker, when we read that the only check on the diffusion of French influence in England is' thatafforded by "the example of a virtuous Queen, and the high moral character of every member of Her Majesty's Government."

When Captain Spencer shakes himself free from the influence of his two 'chief models, and writes as an observer rather' than a moralist, we :fincl that he weakly surrenders himself to other guides of equally pernicious tendencies. He tells us 'himself that one of his reasons for • writing is- that he has had the Lrare oppnitimity `of hearing a great deal of very ,intereating thitcehat,' and'he writes this down without scruple, often without hearing it correctly, and often without forming an 'idea of its weithlessntss. Thus the facts themselves are sometimes incorrect, the moral- drawn from them is always erroneous. In France a great stress is laid upon the facts that the Minister—is a Voltairian, the -Senator—a-Deist, the deputy—an Atheist. This-no doubt is putin by way of con- trast to the moral dives of English Ministers; of which Captain Spencer has been awaited by hie friend in. bottles. But at all events Voltairia.n.s often have ideas, and men maysbehighly moral with- out having any' of those ideas 'necessary for govei•fituebt. And the cliinax Captain "Spenver's discovery is. that, owing to this

'want of religion high places,' the poor Emperor, etety time he falls his- knees, exelaims, "The 'Lord deliver me from my

friends 1" There is something magnificent about -the"e'very and something that savours of exclusive private infdrintition. Does the Emperor fall on his knees with a "flop," as is said of the Ritualists ? And how often in the .day- is this Imperial "flop," with the accompanying ejaculation, heard by the -listeners on the

Travels in France and Germany in 1565 and 1866, including a Steam Voyage doeen the Danube and'a Skft-acrou the Mountains of Beer'opeatrTirrheffrird.Belgrads to Montenegro. Sy Captain Spencer. 2 cols. Loudon liurst aud Blaokett. 1565. backstairs who have conveyed the fact to Captain Spencer? When we get into Germany we are not much better instructed. Captain Spencer kindly marks the transition from France to Germany, by beginning the chit-chat in the former country with mon ami, and In the second with Mein Herr. In crossing the Rhine, too, he gets into a delicious mare's nest about a French invasion of Germany, which seems to take place under his very eyes, and which makes one of his fellow-travellers burst into tears and invoke the unhappy Bismarck in the purest vernacular. Yet even this use of the ver- nacular at the beginning of every speech does not certify the correctness of the facts and inferences which follow. Captain Spencer thinks he has lighted on the most extraordinary revels- tioes, when he hears a sort of debating society of students discuss the respective merits of the Emperor of Austria, the King of Prassia, and Prince Alfred as Emperors of Germany. He thinks he has solved the whole question of nationality and government when he tells us that "every jurist, from the time of the ancient Romans down to our day, has laid down the principle of the right of nationalities to elect their rulers awl maintain their own peculiar laws and institutions," and in the same breath he adds that the adoption of this principle by Austria is "playing fast and loose with the dearest and most cherished interests of mankind." Perhaps the best specimen of his puzzle-headedness will be found in the following account of the Liberal movement among the Catholics of Germany. If, as Captain Spencer says, the subject was the one of all others on which he was desirous of obtaining trustworthy information, he either failed in his object,

" This gave rise to an animated discussion on the very remarkable and unexpected movement which had lately manifested itself among a large portion of what may be called the working clergy of the Roman -Catholic Church in Germany, a movement so liberal, and so entirely opposed to everything in the shape of sectarian prejudice' as to promise results at once important and desirable. It commenced, it appears, in Bavaria, of every other part of Germany the one that had been the most notorious for the bigotry and fanaticism of its inhabitants. As everything in Germany, to be successful, must be influenced in some shape or other by the ruling power, it is so far promising in having had from the first an able supporter in Maximilian, the late Bing of Bavaria, and in his amiable consort, a princess of Prussia ; it is therefore to be hoped that his son and successor will follow the footsteps of his enlightened father, and foster, by every means in his power, the en- deavours of those liberal-minded ecclesiastics who are now labouring to render the spirit of their Church more in accordance with the en- lightenment of the age. It must not, however, be imagined that the movement aims at subverting the peculiar tenets of the Roman Catholie Church. No such thing. The sole object of its supporters is to emancipate opinion from the chains of sectarian prejudice, and to establish in its place something like Christian charity' What the movement is, 'what it aims at, what is the especial form of -Sectarian prejudice"which is deemed worthy of being mentioned twice in so short a page, and 'What is the something like Christian charity which is so great a novelty in the Christian Church of the nineteenth century, Captain Spencer does not condescend to tell 119. ' He talks 'vaguely of the patronage of one king, and the hopes Of -patronage from another. Yet he might have known that most'EngliSh readers are more familiar with the name of Dr. Dollinger than with that of King Maximilian, and that many have heard of the 'struggle between science and authority, between 'reason and tradition.

Had Captain Spencer tried to pick up information from 'better sources than fellow-travellers in a railway carriage and students in a salle-a-manger—we beg his pardon, Speise-saal, we are in Ger- many—he might have learned somewhat and been able to impart it. With his respect for the late King of Bavaria, it is indeed rather strange that he should reflect it back On his predecessor, who was in this sense anything but enlightened. Captain Spencer talks of the triumph King Louis of Bavaria achieved over the Ultramentane bigots, when he admitted the bust of Luther to a place on the shelves of the Walhalla. But was not this a triumph over himself? Was it not his own doing that Luther was so long exeluded ? Captain Spencer thinks that King Louis had no equal in his day among the rulers of men ; and I am also certain that had he been elected by the Unionists as their Emperor in 1848, he would have left a great name behind him in Germany." Unfortunately, this unequalled ruler of men had been called upon just before to choose between constitutional government and abdi- cation, and had most sensibly chosen the latter. The aptness of ' Captain Spencer's political teaching is such that his predic- tions of a peaceful settlement of the Hungarian difficulty lead us -to despair of the future of Austria. He thinks that the plead- ings of the young Empress of Austria, one of the loveliest and most fascinating women of the day, her bewitching smiles, and winning ways will overcome the Hungarians. And why? "The pretty Empress is all openness and urbanity, she has a kind word for everybody, a smile is ever on her lips ; she has a beautiful hand for the men to caress, and one of the finest-moulded arms in the world to embrace the patrician daughters of her dear and loving Magyars !" Who would not be a Hungarian, if such delights were in store for him ? We are so carried away by Captain Spencer's glowing eloquence that we forget his constant inaccuracy and pass over his feeble reasoning, and while we doubt of his con- clusion because it is his, we wish ourselves in a position to test its accuracy.

The small mistakes Captain Spencer makes are sometimes amusing, though of course nothing can bear comparison with the moulded arms of the Austrian Empress and the falling knees of the French Emperor. One of his oddest remarks is on a bas- relief of the Lord's Supper, "in which you see thirteen guests at table. How ominous of the death of one or more of the party I" But as a general rule, the tone in which Captain Spencer writes is fully worthy of his reflections, and the dignity with which he in- troduces some stupendous platitude is worthy of the Proverbial Philosopher. We must do him the justice to say that 'when once he leaves the beaten track and the society of MOW ami and Mein Herr he is readable, almost interesting. The pictures of Servian forests, with their abundance of wild game and half wild pigs, the sport and fishing afforded by the further stages of the journey, would tempt some adventurous spirits to follow Captain Spencer's footsteps. We can only hope, if any of them do follow him, that they either will use their eyes and ears better while they are in France and Germany, or that their friends will fasten their hands down with some adhesive material warranted to bear the rays of the sun of civilization.