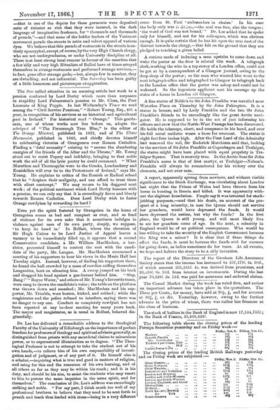 Page 2, 17 November 1866 — The Saturday Review of last week startled the public, and
Close

The Saturday Review of last week startled the public, and

none more, we believe, than the Oxford Colleges themselves, by a very amusing description of the growing taste for costly " vestments " among undergraduates there; and especially, it hinted, among the undergraduates orBalliol. It wassiritimated that deep in the recesses of one of the booksellers' shops was a vestment department, *here 'high' men could view and admire the most -gorgeous apparel suitable to lay brotherhoods looking forward to future ordination,

—that in one of the depots for these garments were deposited suits of raiment so rich that they were insured, in the dark language of imaginative freshmen, for "thousands and thousands of pounds,"—and that some of the bolder leaders of the Vestment -movement parade the streets in satin and velvet apparel of various dyes. We believe that this parade of vestments in the streets is en- tirely apocryphal, except, of course, bythe very High Church clergy, who are not undergraduates, or under University discipline at all. There is at least strong local rumour in favour of the assertion that a few'silly and very high Ritualists of Balliol have at times arrayed themselves in strange vestments and performed strange services,— in fact, gone after strange gods;—but, always few in number, they are dwindling, and not influential. The Saturday has been guilty of a little humorous and picturesque exaggeration.