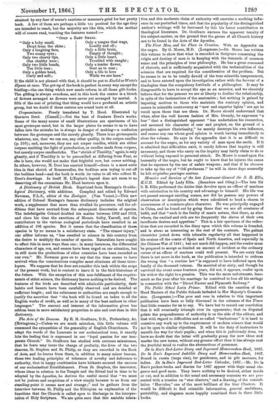 Memoirs and Services of the late Lieutenant-General Sir S. B.

Ellis, K.C.B. Edited by Lady Ellis. (Saunders and Otley.)—The late Sir S. B. Ellis performed the duties that devolve upon an officer of marines with satisfaction to his country and advantage to himself. His life was not passed amongst exciting scenes, nor did he possess any powers of observation or description which were calculated to lend a charm to occurrences of a common-place character. He was principally engaged in China, and he found out by going there that we are all creatures of habit, and that "such is the frailty of man's nature, that there, as else- where, the exalted and rich are too frequently the slaves of their own inordinate desires and appetites." This is a fair specimen of the reflec- tions that are recorded in the diary upon which this volume is founded, and is Abel:Lc as interesting as the rest of the contents. The gallant chronicler jotted down with tolerable regularity all that happened in his cruises off the coasts of Spain and. North America, and especially in the Chinese War of 1841; but not much did happen, and the reader mast be prepared to accept as limited an amount of incident as the ordinary career of an officer of marines could well present. We are sorry that there is not more in the book, as the publication is intended to redress the wrong that "a routine law" is supposed. to have inflicted upon the family of the deceased veteran. He married after sixty, and though he survived the event some fourteen years, did not, it appears, confer upon his widow the right to a pension. This was the more unfortunate, inas- much as the year after his marriage he contrived to lose all his savings in connection with the "Direct Exeter and Plymouth Railway."