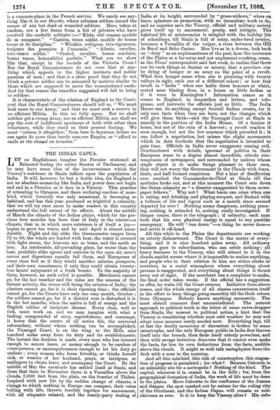 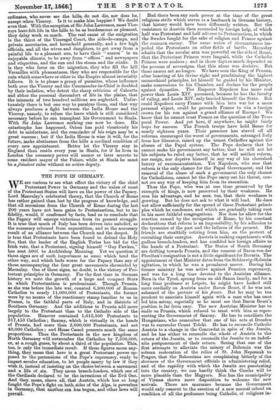 LET an Englishman imagine the Premier stationed at Balmoral during the entire Session of Parliament, and he may have some idea of the inconvenience which the Viceroy's residence in Simla infficts upon the population of India. It will, however, be but a feeble idea, for England is not an absolute monarchy like India, and power does not begin and end in a Premier, as it does in a Viceroy. This practice of retreating to Olympus, and there reclining careless of man- kind, which formerly was only occasional, is becoming so habitual, and has this year produced so frightful a calamity, that we will try once more to make readers in this country understand the full extent of its effects. About the middle of March the climate of the Indian plains, which for the pre- vious four months has been that of Italy in the winter—a climate, that is, in which mere existence is of itself a joy— begins to grow too warm, and by mid April is almost unen- durable. Night and day alike the thermometer ranges from 75 to 90, the winds are loaded with heat, the water is covered with light steam, the heavens are as brass, and the earth as iron. An intolerable, all-pervading glare, far worse than the heat, prohibits alike egress and exercise in the open air, men's nerves and digestions equally fail them, and Europeans of every class feel as if they would sacrifice salaries, prospects, and their own consciences, if only they could obtain twenty- four hours' enjoyment of a fresh breeze. To the majority of them, however, no such relief is possible. Merchants cannot go, for the hot weather and the rains are the seasons of the fiercest activity, the rivers still being the arteries of India; the planters cannot go, for it is their ripening time ; the officials cannot go, for the Courts have only one easy month, October ; the soldiers cannot go, for if a district ever is disturbed it is in the hot months, when the native is full of energy and the English soldier, of incipient disease. Every class, well or sick, must work on, and we may imagine with what a feeling, compounded of envy, regretfulness, and contempt, it hears that the centre of all active life, the universal referendary, without whom nothing can be accomplished, the Viceregal Court, is on the wing to the 'Rills, nine hundred miles away from its duty and its establishments. The instant the decision is made, every man who has interest enough to secure leave, or money enough to be careless of . consequences, or unscrupulousness enough to let his duty go undone ; every woman who loves frivolity, or thinks herself sick, or wearies of her husband, prays, or intrigues, or malingers to obtain leave, and accompany the Court. By the middle of May the cavalcade has settled itself at Simla, and from that time to November there is a Versailles above the clouds, 7,000 feet from the plain, on the frontier of Thibet. Inspired with new life by the sudden change of climate, a change to-which nothing in Europe can compare, their veins boiling with life, thrown forcibly together for amusement, -with all etiquette relaxed, and the family-party feeling of India at its height, Aurrounded by "grass-widows," wives ou leave, spinsters on promotion, -with no immediate work to do, and no superior save the Viceroy, official and military society

gives itself up to amusement, gossip, and intrigue. The ha,J3itual life of aristocracies is mingled with the holiday life

of schoolboys, till Simla is full of noisy, under-bred revelry, becomes a Versailles of the vulgar, a cross between the CEil de Bond and Soho Casino. Men live as in a dream, look back on "duty" as an unpleasantness ef the past, hear the murmurs of the Plains as a far-away and not unpleasant croaking, cease, as the limes' correspondent said last week, to realize that there can be such things as famine or Inisery, that a province can be dying of hunger or an army on the point of a revolt. What does hunger mean when one is picnicing with twenty valleys in sight, each one of a 'different colour ; or how fear revolt in " India " when one holds three honours at whist, seated near blazing fires, in a house as little Indian as if it were in Kensington ? Information comes as it- comes to England, in despatches and letters, and tele- grams, and instructs the officials just as little. The India House can do anything except foretell Indian events, for it only sees facts when they are born, not the changes which will give them birth—and the Viceregal Ceurt at Simla is exactly in the position of the India House. Of a famine it hears, but not of the ruin of a harvest ; a revolt reaches it soon enough, but not the low murmur which preceded it ; it can follow a negotiation, but misses the slight movements . which in Asia forebode that the negotiation is intended to gain time. Officials in India never exaggerate coming evil. Overburdened with details, ignorant of politics in their- European sense to a degree almost incredible, utterly con- temptuous of newspapers, and surrounded by natives whose single object is to make things pleasant to their ears, they will not worry the Government in the Clouds with fears, hints, and half formed suspicions. Not a hint of clisaffection ever reached the Commander-in-Chief at Simla till the- mutinies broke out, and at this moment the Court sets down the- Orissa calamity as "a disaster exaggerated by those news- paper felkIws." Why not ? What harm can come when one- is eating, and drinking, and playing croquet, and flushed with a fullness of life and vigour such as a month since seemed departed for ever ? .Nothing seems dangerous, nothing press- ing, nothing is attended to, nothing really investigated. If danger comes, there is the telegraph ; g calamity, each man feels that his own physical energy is equal to, any possible- emergency. He will "run down "—a thing he never does-- and settle it off-hand.

All this while in the Plains the departments are working on utterly disheartened. The Court is the centre of every- thing, and it is nine hnndred miles away. All ordinary business goes to subordinates, who can settle nothing ; heavy business to the Viceroy, who will attend to it in the clouds, amidst scenes where it is impossible to realize anything,. and people who in their relation to him are either clerks or courtiers, in a social atmosphere where everything about persons is exaggerated, and everything about things is thrust away out of sight. If the merchant has a complaint to make, the final order takes weeks. If the official has a suggestion to offer, he waits till the Court returns. Initiative from above- ceases, and the whole energy of all classes concentrates itself- in the effort to keep things going smoothly till the Gods return from Olympus. Nobody knows anything accurately. The most absurd rumours Rost =contradicted. The nearest approach to political truth is the letter of some eaves-dropper from Simla, the nearest to political action, a hint that the Viceroy is considering whether next cold weather he may not- adopt some measure sorely needed now. Everything lags, till at last the deadly monotony of discontent is broken by some catastrophe, and the only European public in India first throws itself into the breach, then finds itself utterly powerless, and then with savage irritation discovers that it cannot even make. the facts, far less its own deductions from the facts, audible above the clouds. It might as well talk metaphysics from the deck with a man in the maintop.

And all this mischief, this risk of catastrophes, this steps- tion of progress is permitted ; for what ? Because Calcutta is an unhealthy site for a metropolis Nothing of the kind. The capital, wherever it is, cannot be in the hills ; for, from the geographical formation of India, the work of life must be done in the plains. Move Calcutta to the confluence of the Juliana and Ganges, the spot marked out by nature for the ruling city of the Continent, and the Indian Capua will remain as mis- chievous as ever. Is it to keep the Viceroy alive ? His sub-

ordinates, who never see the hills, do not die, nor sloes.- he, except when Viceroy. Is- it to .make him. happier ? We doubt. even that. With the exception of .Sir John Lawrence, most Vice- roys have felt life in the hills to be. as burdensome as pleasant, they delay work so much. The real cause of the emigration is the thirst of the. Viceregal Court,. the aide-de-camps, and private, secretaries, and household generally, and a few high officials, and all the wives and daughters, to get away from a painful life to a pleasant, one, to have their " season " in an enjoyable climate, to be away from " offices " and newspapers and etiquettes, and the sun and the steam and the stinks. It is they who force on the migration, they who fill the hill Versailles with pleasantness, they who are responsible for the ruin which somewhere or other in the Empire almost invariably follows. It is- to please a group of parasites, whose influence both over. the Viceroy and the Commander-in-Chief is doubled by their isolation, who detest the sharp criticism of Calcutta and abhor the personal discomfort of life in the plains, that the interests of two.hundred millions are neglected. Unfor- tunately there is but one way to paralyze them, and that way always- produces a fight between the India House and the Viceroy, namely, to refuse the leave which is still considered necessary before he can transplant his Government to Simla. With Sir John Lawrence nothing can now be done. His catastrophe has happened, Orissa has paid vicariously his debt to ruisfertune, and the remainder of his reign may be a great success ; but if the India House is wise it will, for the futureonake abstinence from the hills a cardinal condition of every new appointment. Better let the Viceroy stay in England than reside every year in Simla, for if he lives in London the necessary power will sooner or later accrete to some resident mayor of the Palace, while at Simla he must be a faine'ent ruler without an active deputy.