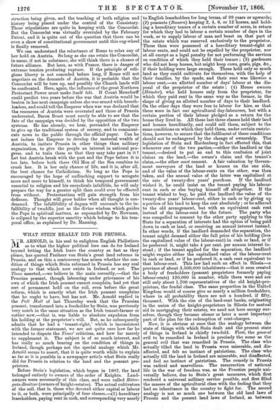 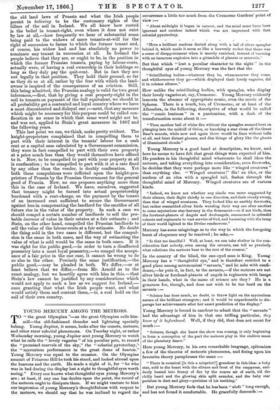 WHAT STEIN REALLY DID FOR PRUSSIA. MR. ARNOLD, in his

hies as to what the higher political lore can do for Ireland beyond letting the Irish leave the country as fast as they please, has quoted Freiherr von Stein's great land reforms in Prussia, and on this a controversy has arisen whether the con- dition of things which Stein reformed in Prussia has any real analogy to that which now exists in Ireland, or not. The Times asserted,—we believe in the main correctly,--that the Prussian peasant, though labouring under grievances of his own of which the Irish peasant cannot complain, had yet that sort of permanent hold on the soil, even before the great reform, which is exactly what the Irish peasant complains that he ought to have, but has not. Mr. Arnold replied in the Pall Mall of last Thursday week that the Prussian peasant, transformed into a freeholder by Stein, was previously very much in the same situation as the Irish tenant-farmer or cottier now,—that is, was liable to absolute expulsion from his holding at the proprietor's will. But, as he subsequently admits that he had a tenant-right,' which is inconsistent with the former statement, we are not quite sure how far he intended to dispute the Times' eriticism, and how far merely to supplement it. The subject is of so much interest, and has really so much bearing on the condition of things in Ireland, though perhaps not the special analogy which Mr. Arnold seems to assert, that it is quite worth while to explain as far as it is possible in a newspaper article what Stein really did for Prussia in relation to the land and the peasant pro- prietors.

Before Stein's legislation, which began in 1807, the land belonged entirely to owners of the order of Knights. Land- owners were necessarily of this class, and were called Ritter- guts-Besitzer (owners of knight-estates). The actual cultivators of the soil, that is, those who devoted either capital or labour to it, or both, were principally of four classes,--(1) hereditary leaseholders, paying rent in cash, and corresponding very nearly to English leaseholders for long terms, of 99 years or upwards; (2) peasants (Bauern) keeping 2, 4, 8, or 12 horses, and hold-

These then were possessed of a hereditary tenant-right at labour rents, and could not be expelled by the proprietor, nor at all except as a legal penalty for not performing the services on condition of which they held their tenure ; (3) gardeners who did not keep horses, but might keep cows, goats, pigs, &c.,

if their holding were large enough. These held only so much land as they could cultivate for themselves, with the help of their families, by the spade, and their rent was likewise a labour rent,—an allotted number of days' labour at the dis- posal of the proprietor of the estate ; (4) House owners (Bawler), who held houses only from the proprietor, for which they paid rent in the same way as the former, in the shape of giving an allotted number of days to their landlord. On the other days they were free to labour for hire, so that these were in fact our agricultural day-labourers, but with a certain portion of their labour pledged as a return for the house they lived in. All these last three classes held their land and houses hereditarily, and could sell them, subject to the same conditions on which they held them, under certain restric- tions, however, to secure that the fulfilment of these conditions should not be endangered by the change of ownership. The legislation of Stein and Hardenberg in fact effected this, that whenever one of the two parties,—either the landlord or the tenant,—desired to put an end to this confusion of joint claims on the land,—the owner's claim and the tenant's claim,—the other must consent. A fair valuation by Govern- ment surveyors of the land or houses on the one side, and of the value of the labour-rents on the other, was then taken, and the annual value of the latter was capitalized at the rate of twenty-five years' purchase. If the landlord wished it, he could insist on the tenant paying his labour- rent in cash or else buying himself off altogether. If the tenant wished to buy, he paid the landlord the value of the twenty-five years' labour-rent, either in cash or by giving up a portion of his land to keep the rest absolutely ; or he adhered to the old arrangement, but with an equivalent cash rent instead of the labour-rent for the future. The party who was compelled to consent by the other party applying to the State for a separation of interests had the option of being paid down in cash or land, or receiving an annual interest instead. In other words, if the landlord demanded the separation, the tenant might demand either the full price of his holding (less the capitalized value of the labour-rent) in cash or land, or if he preferred it, might take 4 per cent. per annum interest in- stead ; if the tenant applied for the separation, the landlord might require either the capitalized value of the labour-rent in cash or land, or if he preferred it, a cash rent equivalent to that labour-rent. This law had such an effect in Silesia—a province of about 3,500,000 inhabitants—that it soon created a body of freeholders (peasant proprietors formerly paying labour-rents) 120,000 in number, while there were and are still only about 1,700 representatives of the old knight-pro- prietors, the feudal class. The same proportion in the United Kingdom would of course give us nearly a million freeholders, where in all probability there are not a hundred, if fifty, thousand. With the rise of the land-rent banks, originating in the union of the knight-proprietors in Silesia for mutual aid in mortgaging their estates, we need not here occupy our- selves, though they became sdoner or later a most important part of the plan for the redemption of rent-charges. Now, it is obvious at once that the analogy between the state of things with which Stein dealt and the present state of things in Ireland is chiefly two-fold. First, the general evil to be remedied in Ireland is precisely the same as the general evil that was remedied in Prussia. The class who actually tilled the land in Prussia were miserable, and dis- affected, and felt no instinct of patriotism. The class who actually till the land in Ireland are miserable, and disaffected, and feel no instinct of patriotism. The remedy in Prussia was radical and marvellous. The resurrection of national life in the war of freedom was, as the Prussian people uni- versally believe, due to Stein's great measures, which first rendered a universal military service possible, and first filled the masses of the agricultural class with the feeling that they had an inheritance in the country to fight for. The second analogy is not so much one between the old land laws of Prussia and the present land laws of Ireland, as between

the old land laws of Prussia and what the Irish people persist in believing to be the customary rights of the tillers of the soil in Ireland. We all know how rooted is the belief in tenant-right, even where it does not exist by law at all,—how frequently we hear of substantial sums being paid to the widows of mere tenants-at-will for the right of succession to farms to which the former tenant and, of course, his widow had and has absolutely no power to nominate any tenant in succession at all. In Ireland the people believe that they are, or ought to be, in the position in which the former Prussian tenants, paying by labour-rents, actually were, of having a real ownership in their holdings so long as they duly pay the quit-rent. But in fact they are not legally in that position. They hold their ground, so far as they do so at all, rather by the fear with which the land- owner is inspired of the consequences of an eviction. Still, this being admitted, the Prussian analogy is valid for two great inferences,—first, that by giving a real property-right in the soil to tenants on payment of the full equivalent, we should in all probability get a contented and loyal country where we have a most discontented and disloyal one ;—next, that any measure which might be necessary for this purpose could be called con- fiscation in no sense in which that same word might not be, and was not, applied to Stein's great measures in 1807 and the following years.

This last point we can, we think, make pretty evident. The knight-proprietors complained that in compelling them to part with their interest in the tenants' labour for a cash rent or a capital sum calculated by a Government commission, they were in fact compelled to part with their own property at a price much less than they would themselves have affixed to it. Now, to be compelled to part with your property at all is confiscation ; to be compelled to part with it at a rate fixed by any other than the vendor, is doubly confiscation. Yet both these compulsions were inflicted upon the knight-pro- prietors of Prussia by the Prussian Government for the general good of Prussia. Now, no one proposes anything more than this in the case of Ireland. We have, ourselves, suggested that tenancy might be turned into actual proprietorship burdened with a rent-charge, on the payment by the tenant of an increased rent sufficient to secure the Government against loss in compensating the landlord for the sacrifice of all future rise in the value of the property. In such a case we should compel a certain number of landlords to sell the pro- bable increase of .value in their estates at a fair estimate ; and Stein, on the other hand, compelled the Prussian landlords to sell the value of the labour-rents at a fair estimate. No doubt the thing sold in the two cases is different, but the compul- sion is the same in both cases, and the way of estimating the value of what is sold would be the same in both eases. If it was right for the public good,—in order to turn a disaffected peasantry into a most loyal peasantry,—to compel the accept- ance of a fair price in the one case, it cannot be wrong to do so also in the other. Precisely the same justification,—the public good,—may be pleaded in both. We differ,—or at least believe that we differ,—from Mr. Arnold as to the exact analogy, but we heartily agree with him in this, —that Stein's law cannot be justified by any considerations which would not apply to such a law as we suggest for Ireland,— once granting that what the Irish people want, and what would satisfy them and content them,—is, a real hold on the soil of their own country.