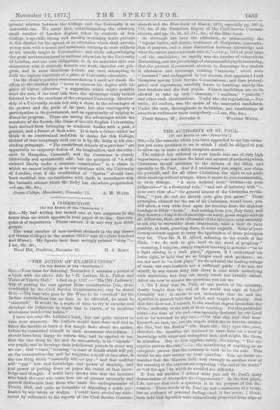 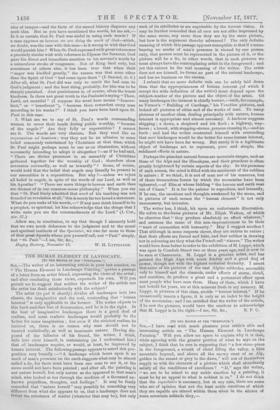 THE AUTHORITY OF ST. PAUL

the remarks which you have appended to my last letter you put some questions to me to which I shall be obliged. to you to allow me to make a fairly complete answer.

The subject has widened in your bands into one of very high importance,—no less than the kind and amount of authority which Christians should attribute to the writers of the Bible, and specially to St. Paul. And if I understand you aright, you claim for yourself, and for all other Christians, the right to set aside their teaching without scruple, when it seems to you unreasonable, or even strange. "A mere isolated text," written—in your judgment—" in a rhetorical rein," "and out of harmony with"— your own view of—" the general tenour of the Christrian revela- tion," " you do not see should even give you pause." These principles, claimed for the use of all Christians, would leave, you will allow, a very wide door open for freedom from the slightest bondage to Bible " texts." And coming from you, they carry, and they deserve—I say it in all sincerity—to carry, great weight with us all. Allow me, then, as an old reader of the Spectator, very earnestly to ask you to reconsider these statements, with a view to your possibly, at least, guarding them, in some respects. Some of your correspondents appear to carry the application of these principles very far. Thus Mr, B. H. Alford, referring to the words of the Bible, " we do well to give heed to the word of prophecy " meaning, I suppose, simply inspired teaching in general—" as to — a light shining in a dark place," appears, if I understand his letter right, to hold that we no longer need such guidance ; we are not now in " a dark place," we do not need the leading-strings of texts, our own instincts are a sufficient guide. I do not, for myself, by any means deny that there is some truth underlying such assertions, but they are surely much too broadly stated. Allow me now to answer the questions you ask me.

1. Do I deny that St. Paul, at one period of his ministry, clearly taught that the end of the world was nigh at hand? Certainly not ; it seems to me undeniable that he and the Apostles in general held that belief, and taught it plainly. But that fact does not, I submit, in the smallest degree invalidate the divine authority of the rest of their teaching. For this particular point—the time of the end—was specially declared by our Lord not to be revealed to any one,—" Of that day and that hour knoweth no man, no, not the angels which are in heaven, neither the Son, but the Father " (St. Mark xiii., 32) ; upon that point, therefore, the Apostles are declared to have been on a level in knowledge with other and uninspired men, and might, li.,Icehte ex- ception be mistaken. But to this applies, surely, the saying, , T ception proves the rule,"—i•e., the mentioning of anything as an exception proves that the contrary is held to be the rule. This would be my own answer to your question. You no doubt re- member that Mr. Maurice held very strongly to another view of the meaning of the expressions respecting "the end of the world" or "of the age," by which be avoided the difficulty.

2. You ask whether I defend what you call St. Paul's hasty denunciation of Alexander the Coppersmith? In the first place, I do not see that such a question is to the purpose of this dis- cussion. Those words of St. Paul are not a statement of a truth, but an outburst of personal feeling—and it has never, I think, been hold that Apostles were miraculously preserved from slips or

sins of temper—and the facts of the sacred history disprove any such idea. But as you have mentioned the words, let me ask,— Is it so certain that St. Paul was sinful is using such words ? If a man opposes us because we are doing the work of God—which, no doubt, was the case with this man—is it wrong to wish that God would punish him ? When St. Paul expressed with great vehemence a precisely similar wish with reference to Elymas the Sorcerer, God gave his direct and immediate sanction to his servant's words by a miraculous stroke of vengeance. Not of King Saul only, but sometimes of others also, it has been true that when their " anger was kindled greatly," the reason was that none other than the Spirit of God " had come upon them " (I. Samuel, xi. 6.) After all, what St. Paul did was only to remit the bad man to God's judgment and the best thing, probably, for him was to be sharply punished. Just punishment is, of course, often the truest kindness. Is there not great truth in the Psalmist's saying "Thou, Lord, art merciful " (I suppose the word here means " benevo- lent," or " beneficent "), " because thou rewardest every man according to his works ?" I think you have been hard upon St. Paul in this case.

3. What are we to say of St. Paul's words commanding women to cover their heads during public worship, " because of the angels ?" Are they folly or superstition ? I cannot see it. The words are very obscure. But they read like an argunientunz ad hominem ; may they not be an allusion to some belief commonly entertained by Christians at that time, which St. Paul might perhaps mean to use as an illustration, without necessarily intending to adopt it altogether ?—as if he had said, There are divine presences in an assembly of Christians gathered together for the worship of God ; therefore show reverence outwardly, as well as inwardly " ? Some, of course, would hold that the belief that angels may literally be present in our assemblies is a superstition. But why ?—unless we reject all belief in angels, in spite of the words of our Lord, as well as his Apostles ? " There are more things in heaven and earth than are dreamt of in our common-sense philosophy." When you say that " St. Paul freely admitted that much of his teaching was not founded on revelation at all," this is surely far too broad a statement. What do you make of his words,—" If any man think himself to be a prophet, or spiritual, let him acknowledge that the things that I write unto you are the commandments of the Lord." (I. Cor., xiv. 37.) Allow me, in conclusion, to say that though I sincerely hold that we owe much deference to the judgment and to the moral and spiritual instincts of the Spectator, we owe far more to those of that great Apostle whom you yourself call, not "Paul" simply, but " St. Paul."—I am, Sir, &c., Hagley Rectory, November 13. W. H. LYTTELTON.