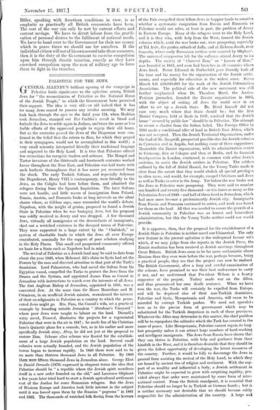 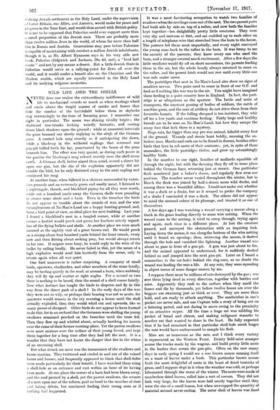 PALESTINE FOR THE JEWS.

GENERAL ALLENBY'S brilliant opening of the campaign in Palestine lends significance to the agitation among British Jews for "the reconstitution of Palestine as the National Home of the. Jewish People," to which the Government have promised their support. The idea is very old—so old indeed that it has for many Jews ceased to possess any secular meaning. Wo may look back through the ages to the fatal year 134, when Hadrian took Jerusalem, stamped out Bar Cochba's revolt in blood and forbade the Jaws to settle again in Judaea, and trace the more or loss feeble efforts of the oppressed people to regain their old home. But as the centuries passed the Jews of the Dispersion were con- . firmed in the belief that the return to Zion, for which they prayed in their synagogues, would not be accomplished in this world ; a very small minority interpreted literally their traditional longings and migrated to the Holy Land. It is true that Palestine offered few attractions for energetic traders and artisans. The Mongol and Tartar invasions of the thirteenth and fourteenth centuries worked havoc throughout the Near East, and Palestine was laid waste with such barbaric thoroughness that it has never yet recovered from the shock. The early Turkish Sultans, and especially Solyman the Magnificent, Henry VIII.'s contemporary, were friendly to the Jews, as the Caliphs had been before them, and admitted the refugees fleeing from the Spanish Inquisition. Tho later Sultans were not hostile, and little waves of immigration from Poland, Russia, Austria, and Rumania broke at long intervals on the silent shams where, as Gibbon says, once resounded the world's debate. Napoleon, with the insight of genius, proposed to found a Jewish State in Palestine when he was besieging Acre, but his proposal Was coldly received in Jewry and was dropped. A few thousand Jews, virtually all immigrants or the descendants of immigrants, eked out a wretched existence in the decayed towns of Palestine. They were supported to a largo extent by the " Chalukah," or system of charitable funds to which the Jews all over Europe contributed, nominally for the support of poor scholars studying in the Holy Places. This small and pauperized community offered no basis for a State such as Napoleon had in mind.

The revival of Palestine as a Jewish land may be said to date from about the year 1840, when Mehemet Ali's claim to Syria had set the Powers by the ears and directed attention to that part of the Turk's dominions. Lord Palmerston, who had saved the Sultan from his Egyptian vassal, compelled the Turks to protect the Jews front the Draws and the Syrians, and appointed James Finn as Consul in Jerusalem with instructions to watch over the interests of all Jews. The first Anglican Bishop of Jerusalem, appointed in 1841, was a converted Jew. At the same time Sir Moses Montefiore and M. Cremieux, in an unofficial Jewish mission, reawakened the interest of their co-religionists in Palestine as a country to which tho perse- cuted Jews might go. Mrs. Finn, the Consul's wife, sot a practical example by founding outside Jerusalem " Abraham's Vineyard " whore poor Jews were taught to labour on the land. Disraeli's witty novel, Tancred, illustrates the projects for a regenerated Palestine that were in the air in 1847 ; he made fun of his Christian hero's Quixotic plans for a crusade, but, as in his earlier and more specifically Jewish story, Alm', he did not jest at the proposal to restore Zion. Scheme after scheme was floated for the establish- ment of a large Jewish population on the land. Several entail colonies were actually founded, and the Jewish population of the towns began to increase rapidly. In 1840 there were said to be no more than thirteen thousand Jews in all Palestine. By 1880 there were fifteen thousand Jews in Jerusalem alone. George Eliot in Daniel Derma& (1876) expressed in eloquent terms the idea that Palestine should be "a republic where the Jewish spirit manifests itself in a new order founded on the old," and Laurence Oliphant a few years later tried hard to start a Jewish agricultural settlement east of the Jordan for some Rumanian refugees. But the Jews of Western Europe and America took little interest in the subject until it was forced upon them by the Russian " pogroms " in 1881 and 1882. The thousands of wretched folk fleeing from the horrors of the Palo compelled their fellow-Jews in happier lands to consider whether a systematic emigration from Russia and Rumania to Palestine would not solve, at least in part, the problem of Jewry in Eastern Europe. Many of the refugees went to the Holy Land. and it is they who, with help from the West, formed the Jewish colonies which, until the war broke out, were prospering, especially at Tel Aviv, the garden suburb of Jaffa, and at Zichron Jacob, near Samaria, whose early Rumanian settlers were assisted by Oliphant The universal compassion felt for the sufferers stirred Jewry to its depths. The society of " Choveva Zion," or " Lovers of Zion," was founded in 1884, and soon had branches in all countries whore Jews lived. Baron Edmond de Rothschild gave liberally both of his time and his money for the organization of the Jewish settle- ments, and especially for education in the widest sense. Berea Hirsch left £10,000,000 for rho work of the Jewish Colonization Association. The political side of the new movement was still further emphasized when Dr. Theodore Herz!, the Austro- Parisian journalist, founded the Zionist organization in 1896, with the object of uniting all Jews the world over in an effort to set up a Jewish State. Dr. Herd himself did not cam very much whore that State should he ; but the first Zionist Congress, held at Basle in 1897, resolved that the Jewish home " secured by public law " should be in Palestine. Tho attempt to secure a charter from the Sultan failed. Tho Foreign Office is 1903 made a conditional offer of land in British East Africa, which was not accepted. Then the Jewish Territorial Organization, under the load of Isle. Zangwill, prospected possible sites for Jewish colonies in Cyronaica and in Angola, but nothing came of these suggestions Meanwhile the Zionist organization, with its administrative centre in Germany, first at Cologne and then at Berlin, and its financial headquarters in London, continued, in common with other Jewish societies, to assist the Jewish settlers in Palestine. The settlers suffered by the fall of Abdul Hamid, for the Young Turks made it clear front the outset that they would abolish all special privileges to alien races, and would, for example, compel Christians and Jaws as well as Turks to serve in the Army. Yet before the war broke out the Jews in Palestine were prospering. They wore said to number ono hundred and twenty-fivo thousand—or ten times as many as the Palestinian Jews of 1840—and half of them lived in Jerusalem, which had once more become a predominantly Jewish city. Immigrants from Russia and Rumania continued to arrive, and work was found for them on the land. All that was needed to assure the growth of a Jewish community in Palestine was an honest and benevolent administration, but this the Young Turks neither could nor would provide.

It is apparent, then, that the proposal fur the establishment of a Jewish State in Palestine is neither novel nor !chimerical. Tho only new feature in the present agitation is the widespread favour with which, if we may judge from the reports in the Jewish Press, the Zionist resolution has been received at Jewish meetings throughout Great Britain. British Jews seem to be far ntoro enthusiastic about Zionism than they ever were before the war, perhaps beca•.rse, being a practical people, they see that the project can now be realized. The British Government., after a long and careful examination of the scheme, have promised to use their best endeavours to carry it out, and we understand that President Wilson is a hearty supporter of the project. Turkey made war on the Allies. and thus pronounced her own death sentence. When we have won the war, the Turks will certainly be expelled from Europe. and will be deprived also of their non-Turkish dominions, Palestine and Syria, Mesopotamia and Armenia, will cease to be misruled by corrupt Turkish pashas. We need not epoculat hero as to the precise form of government which may be

substituted for the Turkish despotism in each of these provinces. Whatever the Allies may determine in this matter, the chief problem

name of poaoo. Like Mesopotamia, Palestine cannot regain its long. lost prosperity unless it can attract largo numbers of hard-working and intelligent immigrants. The Jews front Russia have shown that they can thrive in Palestine, with help and guidance from their kinsfolk in the West, and it is therefore desirable that they should be given the fullest opportunity of developing the latent resources of the country. Further, it would be folly to discourage the Jews in general from assisting the revival of the Holy Land, to which they

are bound by ancient ties of religion and sentiment. With the sup-

port of so wealthy and influential a body, a Jewish settlement in Palestine might be expected to grow with surprising rapidity, pro- vided always that order were maintained by some form of inter- national control. From the British standpoint, it is essential that Palestine should no longer be in Turkish or German hands ; but it is neither necessary nor desirable that we should become solely responsible for the administration of the country. A large and

t triving Jewish settlement in the Holy Land, under the supervision a Great Britain, our Allies, and America, would make for peace and 'ingress in the Near East, and would thus accord with British policy. I t is not to be supposed that Palestine could ever support more than a small proportion of the Jewish race. There are probably more than twelve million Jews in the world, of whom far more than half live in Russia and Austria. Generations may pass before Palestine is capable of maintaining with comfort a million Jewish inhabitants, though it is, as Mr. Albert Hyamson says in his very able new look. Palestine (Sidgwick and Jackson, 108. 13d. net), a "land laid waste " and not by any means a desert. But a little Jewish State in Palestine would serve as a rallying-point for Jews all over the world, and it would confer a benefit also on the Christian and the Moslem worlds, which are equally interested in the Holy Land and its undying religious memories.