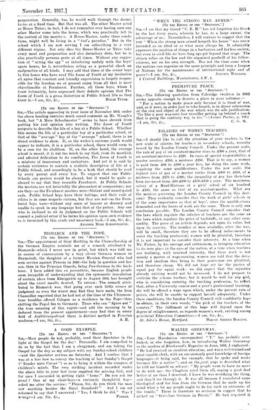 Ste,-1 should like to call the attention of your readers to the new scale of salaries for teachers in secondary schools, recently issued by the London County Council. tinder the present scale, the rate of pay of an assistant-master rises to 1100 a year, that of an assistant-mistress to 8220. In cases of specie' responsibility, e master receives £350, a mistress 2250. That is to say, a woman is paid from 830 to -el® a year less, for doing the some work, requiring the some qualifications. Under the new scale, the highest rate of pay of a master varies front 1300 to £150, of a mistress from .L-270 to 4100; the inequality of pay lies therefore been increased from £80-8100 to 8130-X150 a year. The inaSinnim salary of a Head-Mistress of is girls' school of six hundred is 8150, the same as that of on assistant-master. What era the motives governing the London County Council in this deci- sion? They evidently consider that the work of girls' schools is of the same importance as that of boys', since the qualifications demanded and the hours of work are the sense. There is only one conclusion possible. The London County Council consider that the laws which, regulate the salaries of teachers are the same al the laws which regulate the price of foodstuffs, or any other com- modity. The price of an article depends, not upon its value, hint upon its scarcity. The number of men available, niter the war, will be small, therefore they are to be offered inducements to enter the teaching profession; women will be plentiful, therefore it is not important to consider their interests. At a time when Mr. Fisher, by his courage and enthusiasm, is bringing education to its true place in the eyes of the nation, at a time when teachers are realizing, with renewed intensity, that their work is not merely a matter of wage-earning, women are told that the devo- tion and idealism they bring to their profession are plentiful, and therefore cheep. We did not hope yet for the justice of equal pay for equal work : we did expect that tine injustice already existing would not be increased. I do not propose to criticize the scheme further, but it would bo well for any girl, who is considering entering the teaching profession, to reflect that, after a University course and a year's professional training, she will be offered a wage upon which, under the present rate of prices, sine will be unable to support herself adequately. Under these conditions, the London County Council still confidently hops to obtain, in their own words, "the pick of the teachers of the country." The fulfilment of • this hope will depend upon the degree of enlightenment, as resards women's work, existing among provincial Education Committees.—I am, Sir, Sc.,