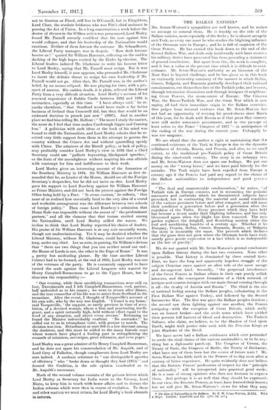 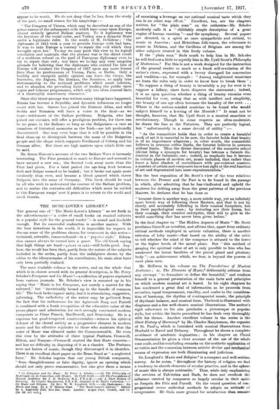 MR. Scrow-WArsos's sympathies ore well known, and lie makes no attempt to conceal them. fie is frankly on the side of the Balkan nations, more especially of the Serbs ; he is almost savagely anti-Turk, as every one must be who studies the blighting influence of the Ottoman race in Europe ; and be is full of suspicion of the Great Powers. He has carried this book down to the end of tho Second Balkan War, and deals only incidentally with later events ; his military duties have prevented him from providing a statement of general conclusions. But apart from this, the work is complete, and it has a value at the present time which it is difficult to over- estimate. Mr. Seton-Watson's authority as an historian of the Near East is beyond challenge, and he has given us in this book an extremely interesting summary of the manner in which Serbia, Greece, Bulgaria, and Rumania gradually developed their national consciousness, cut themselves free of the Turkish yoke, and became, through internecine dissensions and through intrigues of neighbour- ing Great Pewees, the storm-centre of Europe. The Crimean War, the Russo-Turkish War, and the Great War which is now raging, all had their immediate origin in the Balkan countries. One judges from internal evidence that Mr. Seton-Watson has not had an opportunity of revising Ins proof-sleets since March of this year, for he deals with Russia as if that great Slav country were still entice autocratic government, and in one passage at least refers to the Peace " Congress of 1917 "— in anticipation of the ending of the war during the current year. Unhappily he was too sanguine.

We are afraid that the author is right in maintaining that tl.a continued existence of the Turk in Europe is due to the dynastic selfishness of Austria, Russia, and Prussia, and also, to no small extent, to the traditional pro-Turkish policy of Great Britian during the nineteenth century. The story is on unhappy one, and Mr. Solon-Watson does not spare our feelings. We put our money on the " wrong horse," and we have paid bitterly for the mistake. The Turk might have been expelled from Europe a century ago if the Powers had paid any regard to the claims of the Balkan nationalities to independence and good coven meat

The final and unanswerable condemnation," he writes, "of Turkish rule in Europe consists, not in recounting the periodic massacres and outbreaks which its discontented subjects have provoked, but in contrasting the material and moral condition of the various provinces before and after conquest, and still more their condition a generation before and a generation after the expulsion of the Turks. Every province which they have held has becotne a desert under their blighting influence, and has only blossomed again when the blight has been removed. The rose garden replaces the dunghill, and flourishing modern cities the foul and mouldering hamlets of a century ago. Whether it bo Hungary, Croatia, Serbia, Greece, Rumania, Bosnia, or Bulgaria the story is invariably the same. The proverb which declares that the grass does not glow where the Ottoman hoofs have trod, merely gives poetic expression to a fact which is as indisputable as the law of gravity."

We do not quarrel with Mr. Seton-Watson's general conclusions upon Balkan history during the lest two centuries. None other is possible. That history is dominated by three central facts. First, we have the long and apparently hopeless struggle of the subject Christian races against en alien rule of the most savage and incompetent kind. Secondly, " the perpetual interference of the Great Powers in Balkan affairs in their own purely selfish interests, and the consequent formation of a thick network of intrigue and counter-intrigue with one main thread running through it all—the rivalry of Austria and Russia." The third is the rise of national feeling among the Balkan peoples, culminating in the First Balkan War against Turkey, and followed by the Second Internecine War. The first war gave the Balkan peoples freedom ; the aecond saw them fighting against one another, the Powers intriguing—with the exception of Great Britain, which really was an honest broker—and the seeds sown which have yielded their present full harvest of blood and destiuction. The Turkish Sultans, who claim, we believe, to be the Shadow of God upon Earth, might with justice take rank with the Prussian Kings as joint Shadows of the Devil.

NVe have never had a Balkan settlement which ever pretended to settle the rival claims of the various nationalitie a, or to be any- thing but a diplomatic patch-up. The Congress of Vienna, the Treaty of Paris, the Congress of Berlin, the Treaty of Bucharest, what leave any of them been but the source of future ware 7 Mr. Seton-Watson has little faith in the Powers of to-day even after a century of bitter experience. He quite evidently does not believe that the Entente Powers' profession of respect for the "principle of nationality " will be interpreted into practical good works. He is a man of strong opinions who does not hesitate to express them. And perhaps it is as well that they should be expresses!. In our view, the Entente Powers, at least, have learned their lesson ; but we will give Mr. Salon-Watson's views for what they may • The Rise of .Valionality is lee Ran:ann. By R. W. attOu-Watson, B Utt, Bah e leaps. Leaden: Constable and Co. lies. ad. sett

appear to be worth. We do not deny that he has, from the study of the past, no small meson for his misgivings The Congresie of Vienna, which may be described as one of the prime causes of the subsequent evils which have come upon Europe, nlmost entirely ignored Balkan matters. To it legitimacy was the keystone of the social order, and Turkey was a dynastic State under a legitimate ruler. In the worths of AL Debidour ; ' the diplomats of 1815 took a year to provide Europe with bad laws. It was to take Europe a century to repair the evil which they wrought upon her.' To-day we may push this view to its logical conclusion and maintain that the present war is the direct result of a stubborn refuse] on the pari of European diplomacy even to try to repair that evil ; nor have we to-day any very sanguine grounds for believing that the diplomats who control the fate of Europe will conduct the Congress of 1917 upon any more honest lines than its predecessors of Vienna, Paris, or Berlin. Only a healthy and energetic public opinion can force the Greys, the Sezenove, the Jagows, the Burians, the Sonninos, to apply true statesmanship to the national problems which await solution, and to abandon the prevailing habit of feeding the public upon vague and fulsome progrenunes, which only too often conceal facts of a thoroughly reactionary character."

Since this bitter passage was written many things have happened. Rneaia has become a Republic, and dynastic influences no longer count with her. Greece has joined the Entente Allies, and with Serbia and Rumania will have a voice in the final—as we hope—settlement of the Balkan problems. Bulgaria, who has joined our enemies, will offer a prodigious problem, for there can be no peace in the Balkans so long as the Bulgarians—a race as tenacious of historical memories as the Irish—am left profoundly discontented. One may even hope that it will be possible in the final clean-up to distinguish between the mass of the Bulgarian people and the clique which supports Ferdinand of Coburg and his German allies. But these are high matters upon which little can be said.

Mr. Seton-Wateon's account of the two Balkan Wars is intensely interesting. The First promised so much to Europe and seemed to have secured a new era ; the Second took away more than the First had given. For a brief period the age-long feud between Serb and Bulger seemed to be healed ; but it broke out again more virulently than ever, and became a blood quarrel which threw Bulgaria into the arms of Germany. This book should be reed by all who wish to understand the essence of the Balkan problem, and to realize the centuries-old difficulties which must be settled in this European wasps' nest if peace is to return to the world and dwell therein.