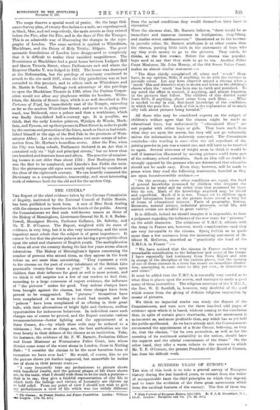 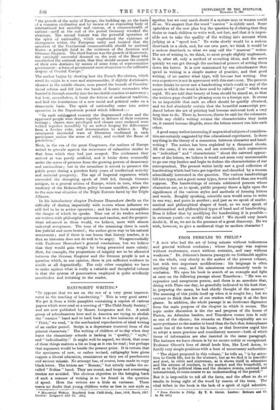 A HUNDRED YEARS OF EUROPE.*

Tim aim of this book ie to Enka a general survey of European Watery during the lastt hundred years, to extract from the welter of unorganizable facts the chief principles on which they depend, and to trace the evolution of the three groat movements which form the cardinal features of the century. The first of these was • Main Outrents of European Ilietory, 181:1-1916. Br H. I. O. Deortehow, LL.D. London Slaeraillea and Co. 17e. flit. net.] " the growth of the unity of Europe, the building up, on the basis of a common civilisation and by IMAMS of an expanding body of international law morality and custom, of a commonwealth of nations—until at the end of the period Germany wrecked the structure. The second feature was the powerful operation of the spirit of nationality, which emphasised the existence of divergences within the European unity and insisted that the members of the Continental commonwealth should be national States—a principle fatal to the existence of the Austrian and Ottoman Empires. The third feature was the growth of democracy, the varyingly successful demand on the part of the Many who constituted the national unite, that they should pastime the control of their own destinies by means of some form of representative government—a form of government moat obnoxious to the militarist despots of Central Europe."

The author begins by showing how the French Revolution, which owed its origin to a sane and statesmanlike, if slightly doctrinaire, element in the middle classes, soon passed the bounds of Conatitu- tional reform and fell into the hands of fanatic extremists who hurried it through anarchy into the inevitable reaction to autocracy ; but how, nevertheless, it burst the fetters of mediaeval tradition, and laid the foundations of a now social and political order on a delnocrutic basis. The spirit of nationality came into active operation in the Napoleonic period which followed :— " In each subjugated country the dispossessed rulers and the oppressed people wore drawn together in defence of their common heritage ; classes once privileged and classes once enslaved were welded together incredibly by an ardent longing for deliverance from a foreign yoke, and determination to achieve it. The consequent successful wars of liberation confirmed in each participant nation the sense of unity, and excited the flame of patriotism."

Next, in the era of the great Congresses, the nations of Europe united to provide against the recurrence of calamities similar to that from which they had just escaped. The settlement they arrived at was purely artificial, and it broke down eventually under the stress of pressure from the growing powers of democracy and nationalism ; but in the meantime it served to preserve the public peace during a priceless forty years of intellectual activity and material prosperity. The age of Imperial expansion which auceemled the diarupting epoch of 1848 led, through German intrigue, to a general schism of Europe, which in turn, when the tendency of the Hohenzollern policy became manifest, gave place to the ante-war situation of the Triple Entente faced by the Triple Alliance.

In his introductory chapter Professor Heamshaw dwells on the difficulty of dealing impartially with events whose influence we still feel to be in active operation ; and his own book exemplifies the danger of which he speaks. Nino out of its twelve sections are written with philosophic quietness and caution, and the proposi- tions advanced in them would, we believe, meet with almost universal acceptance. The tone of the remaining three is much less judicial and more heated ; the author gives way to his natural resentment ; and if there is one lesson that history teaches, it is that an historian does not do well to be angry. We agreecordially with Professor Hearnshaw's general conclusions, but we believe that they would gain weight by being presented more calmly. How, for example, the proportions of iniquity are to be allocated between the German Emperor and the German people is not a question which, in our opinion, there is yet sufficient evidence to decide at all dogmatically. The only other complaint we have to make against what is really a valuable and thoughtful volume is that the system of punctuation employed is quite needlessly unorthodox and irritating to the reader.