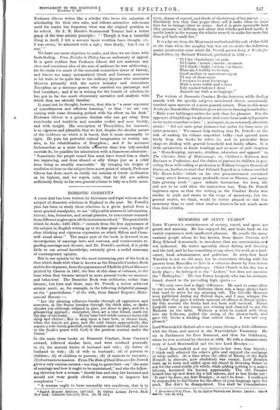 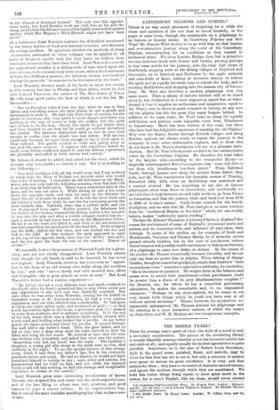 LORD WARWICR'H reminiscences of society, travel, and sport are genial and amusing. He has enjoyed life, and looks back on his varied experiences with unaffected pleasure. He recalls the many eminent people whom he has known, from Queen Victoria and King Edward downwards, in anecdotes that are entertaining and not indiscreet. He writes agreeably about fishing and shooting and the turf, and he has something to say about his work as a land. owner, local administrator, and politician. At sixty-four Lord Warwick is not an old man, but ho remembers driving with his parents from Marseilles to Nice in a relturino drawn by four horses —so recent is the era of railways. Christ Church in his day was a lively place ; he belonged to the " Loders," but does not mention the " Bullingtion." The late Prince Leopold, who was ilia intimate friend, shared in the prevailing high spirits

" We only once had a slight difference. He used to come often to my rooms, and in my bedroom there wits a largo shower-bath that used to serve for my morning tub. T110 Greville Memoirs were published during my Oxford days, and I may whisper the truth that they gave a certain measure of offence in Royal circles. On tide account the books had not been well received. Prince Leopold came to my rooms one evening and chanced to see the Memoirs on the table. Without a word he rushed with them into my bedroom, pulled the string of the shower-bath, and gave the books a ducking that ruined them. I was not very pleased."

Lord Warwick loft Oxford after two years, through a little difference with the Dean, and served in the Warwickshire Yeomanry. He sat in Parliament for East Somerset, and then for Colchester, where he won a critical by-election in 1888. He tells a characteristic story of Lord Beaconsfield and the late Lord Rosalyn

" Lord Beaconsfield and my father-in-law were firm friends ; I think each admired the other's gifts and enjoyed the exchange of witty sallies. At a time when the office of Master of the Buck Hounds (a sinecure, now abolished) was vacant, Lord Rosalyn went up to town and called upon his friend in Downing Street to ask for the comfortable job which, while adding nothing to a man's labours, increased his income appreciably. The old Premier looked him up and down for a full minute, and at last broke out :

• It can't be done, my dear Rosalyn ; it can't be done. I could not be responsible to the Crown for the effect of your language upon the i

pack. But don't be disappointed. You shall be Co • Arm:odes efgirts Paint By the Earl of Warwick and Brooke. Loudon: Cana and Co. 112.. Od. =LI

to the Church of Scotland instead.' Not only was this appoint- ment made, but Lord Roselyn took me with him as his aide-de- ramp, and I think the Divines enjoyed the highly-seasoned eloquence against which Her Majesty's Buck Hounds might not have been proof."

As a landowner Lord Warwick explains the difficulties occasioned by the heavy burden of local and national taxation, and discusses the cottage problem. He questions whether the methods of cheap :Instruction advocated in these columns can be applied to all parts of England equally well, but they have, we believe, been succeasful wherever they have boon tried. Lord Warwick's remedy for agricultural troubles is a sliding-scale of rent based upon the price of cont, to be revised every three years, with a fixed minimum of forty-five shillings a quarter, the labourer, farmer, and landlord sharing the proceeds " in measure to be determined by the State." Lord Warwick devotes much of his book to sport not merely in this country but also in Florida and East Africa, whore he shot with Colonel Patterson, the author of The Alan-Eaters of Team. He tells some good yarns, the best of which is not his but Mr. Roosevelt's :- " The ex-President related bow one day, while he was in East Africa and travelling across the open plains, he saw a giraffe and determined to stalk it. He had very little hope of success, for the giraffe is timorous, shy, very quick to scent danger and there was nothing in the way of cover to help the stalker, but the spirit moved him to do his best. Slowly but surely he got within shot, and then decided to see how far he could go without disturbing the animal. The distance diminished until at last he was close enough to realise that the giraffe was fast asleep. Still moving cautiously forward, he came close enough to lay a hand upon it. That sufficed. The giraffe seemed to wake and gallop away at one and the same moment. I suppose this experience stands by itself, even Scions could not motels it, and his African experiences are probably unrivalled in both extent and variety."

Mr. Mous, it should be added, had asked for the story, which he thought very remarkable, as indeed it was. But it is nothing to the following :— " You find credulous folk all the world over, but I am inclined to think that the West of Ireland can provide some who would take a lot of beating. I remember an old fisherman on the Black- water, who not only told the following amazing story but had told it an often t hat he believed it. There was a monstrous pike in the river, and ho was out after it. While fishing he saw a fox come down the opposite bank, and very far away in the distance he heard the cry of hounds in pursuit. So he left the river bank and lad behind a bush from which he saw the fox swimming across the river towards him. Suddenly there was a violent swirl, and the fox disappeared from sight. Rather puzzled, the fisherman left the shelter of the bitches, resumed his fishing, and in a few minutes he was into the pike and after a terrific struggle hauled him M- eech a monster as had never been seen in the Blackwater before. He hit It on the hoed and killed it, and then to his astonishment saw that something was moving Inside the dead fish. So he whipped out his knife, ripped the fish open, and out dashed the fox and fled to the hills. At that moment the pack appeared iu sight at the top of the opposite bank, there was the ` ' own sport, and the fox gave the hunt the run of the season ! Magna eat writes !"

We naturally look to thepossessor of Warwick Castle for a ghost- story, and are not wholly disappointed. Lord Warwick admits that, though the old Castle is said to be haunted, Ito has never seen a ghost. Lady Warwick, however, has twice seen an " appari- tion in the form of an old woman who walks along the corridors by day," and who " moves slowly sad with averted face, silent and intangible—she is gone almost as soon as seen." But Lord Warwick's father had a curious experience :- " My father, though a very delicate man and much confined to the Castle when his health permitted him to stay there, never saw any apparitions of any kind and was decidedly sceptical. But once when he was away from Warwick, staying for his health in furnished rooms at St. Leopards-on-Sea, he bad a very curious experience, and one that affected him considerably. If- had gone to sleep one night rather early, and awakened at midnizIit to find a soft. mysterious light in the room, a pervasive glow tent seemed to come from nowhere, and to embrace everything. It lit the end of his bed, where there was a skeleton figure partly draped with a red scarf and holding what looked like a javelin. As my father gazed, the figure poised and threw the javelin. It passed through the wall above any father's head. Then the glow faded, and he fell at once into a deep sleep until his valet arrived to draw his blind and bring his hot water. He noticed at once that the man was looking very perturbed, and asked him what was the matter. ' Something very sad, my Lord,' was the reply. ' The landlady's daughter, a young girl who sleeps in the room next to this, deed suddenly in the night.' To me the special interest of this strange story, which I had from my father's lips, lies in his eminently practical nature and mind. He had no fancies, he would not have permitted himself to indulge in any ; sane, sober and serious, the supernatama had no hold on him, and yet, while the haunted Castle could tell him nothing, he had this strange and inexplicable experience in rooms at the seaside."

Lord Warwick givee some interesting recollections of Queen Victoria, who inspired him and every one else with respectful awe, end of the late King, to whose rare tact, courtesy, and good humour he pays a sincere tribute. In its unpretentious way, this is one of the most readable autobiographies that we have seen of late.