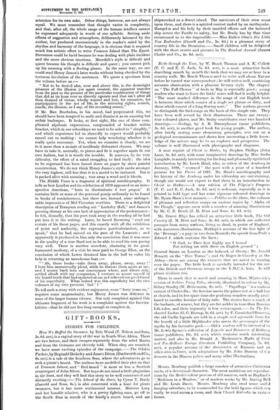 There is much that is novel and amusing in Mmo.

Mijatovich's version of Serbian Fairy Tales, cleverly illustrated in colour by Mr, Sidney Stanley (W. Heinemann, es. not). " Papalluga " is n curious variant of Cinderella ; the heroine meets the prince not at a ball but at church, and in her spare time she performs wonders usually attri- buted to another heroine of fairy-tale. The stories have a touch of the barbaric, of course, but they are far milder in tone than Russian folk-tales, and their ingenuity is less extravagant.—In The En- chanted Eochan (G. G. Harrap, Is. ed. not), by F. Carmichael Brunton, the old Gaelic legends are told in a simple and agreeable form for the benefit of a little Highlander who meets the personages of the myths by his favourite pool.—Older readers will be interest eel in Mr. Lewis Spence's collection of Legends anti Rontancer of Brittany (same publishers, les. ed. net), which contains much interesting matter, and also in Mr. Donald A. efackenzio's Myths of Crete and Pre-Hellenic Europe (Gresham Publishing Company, 7s. Oil. net), a popular account of the discoveries at Knossos and at other sites in Crete, with adaptations by Mr. John Duncan of t'..o frescoes in the Minoan palace and many other illustrations.