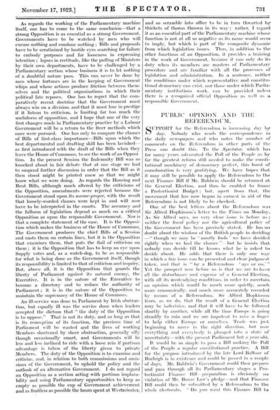 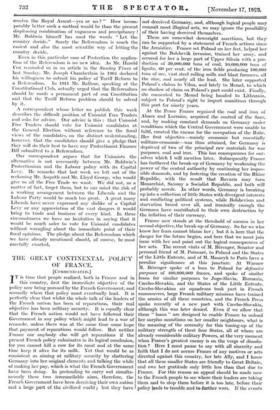 PUTHIC OPINION _AND THE REFERENDUM.

SUPPORT for the Referendum is increasing day by day. Nobody who reads the correspondence in the daily newspapers and who notes the number of continents on the Referendum in other parts of the Press can doubt this. To the Spectator, which has for many years advocated the Poll of the People as by far the greatest reform still needed to make the consti- tutional machinery of democracy perfect, this burst of corroboration is very gratifying. We have hopes that it may still be possible to apply the Referendum to the next Finance Bill if Mr. Baldwin should be returned at the General Election, and thus be enabled to frame a Protectionist Budget ; but, apart from that, the movement that has now begun in earnest. in aid of the Referendum is not likely to be checked.

One of the best letters about the Referendum was Sir Alfred Hopkinson's letter to the Times. on Monday. As Sir Alfred says, no very clear issue is before us ; neither the fiscal policy nor the agricultural policy or the Government has been precisely stated. Ile has no doubt. about the wisdom of the British people in deciding --" though we may be mostly fools ' we have decided rightly when we had the chance "—but he insists that nobody can decide till he knows what he is asked to decide about. He adds that there is only one way in which a fair issue can be presented and clear judgment taken, and that is " by a Referendum ---` aye or no.' " Yet the prospect now before us is that we are to have all the disturbance and expense of a General Election, with all its unsteadying conditions. in order to ascertain an opinion which would be much more quietly, much more economically, and much more accurately recorded by means of a Referendum. Sir Alfred Hopkinson fears, as we do, that the result of a General Election may be indecisive, and that it will have to be followed shortly by another, while all the time Europe is going steadily to ruin and we are impotent to raise a finger to help either Europe or ourselves. Trade was just beginning to move in the right direction, but now everything and everybody is plunged into a state of uncertainty—with the present Parliament but a year old. It would be so simple to pass a Bill making the Poll of the People a regular constitutional practice. A Bill for the purpose introduced by the late Lord Balfour of Burleigh is in existence and could be passed in a couple of days. Mr. Baldwin's Government could then prepare and pass through all its Parliamentary stages a Pro- tectionist Finance Bill--preparation is obviously no violation of Mr. Bonar Law's pledge—and that Finance Bill could then be submitted by a Referendum to the whole electorate. " Do you want this Finance Bill tO receive the Royal Assent—yes or no ? " How incom- parably better such a method would be than the present displeasing combination of vagueness and precipitancy ! Mr. Baldwin himself has used the words "Let. the country decide." Surely the Referendum is much the easiest and also the most scientific way of letting the country decide.

Even in this particular case of Protection the applica- tion of the Referendum is no new idea. As Mr. Harold Cox reminded us in an article in the Sunday Times of last Sunday, Mr. Joseph Chamberlain in 1904 declared his willingness to submit his policy of Tariff Reform to a Referendum. In 1911 Mr. Balfour, speaking at the Constitutional Club, actually urged that the Referendum should be made a permanent part of our Constitution and that the Tariff Reform problem should be solved by it.

A correspondent whose letter we publish this week describes the difficult position of Unionist Free Traders and asks for advice. Our advice is this : that Unionist Free Traders should vote for Unionist candidates at the General Election without reference to the fiscal views of the candidates, on the distinct understanding, however, that the candidates should give a pledge that they will do their best to have any Protectionist Finance Bill submitted to a Referendum.

Our correspondent argues that for Unionists the alternative is not necessarily between Mr. Baldwin's Protectionism and the Labour policy with its Capital Levy. He remarks that last week we left out of the reckoning Mr. Asquith and Mr. Lloyd George, who would give us all the Free Trade we want. We did not, as a matter of fact, forget them, but to our mind the risk of a working arrangement between the Liberals and the Labour Party would be much too great. A great many Liberals have never expressed any dislike of a Capital Levy or any appreciation of the vast dangers it would bring to trade and business of every kind. In these circumstances we have no hesitation in saying that it would be much safer to vote for Unionist candidates without wrangling about the immediate point of their fiscal opinions. The pledge about the Referendum which we have already mentioned should, of course, be most carefully exacted.