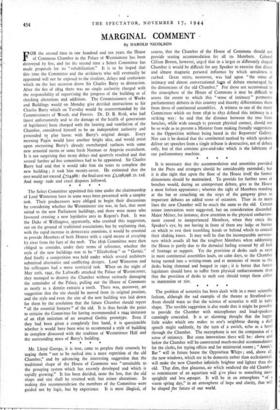 dealt with in a most scientific fashion, although the sad example of the theatre at Stratford-on-

Avon should warn us that the science of acoustics is still in baby shape. The terrible suggestion is also made that it might be possible to provide the Chamber with microphones and loud-speaker, cunningly concealed. It is an alarming thought that the hair little asides which one makes to one's neighbour during a dull speech might suddenly, by the turn of a switch, echo as a howl through the Chamber. The microphone is not the companion of a sense of intimacy. But some innovations there will be: above and below the Chamber will be constructed much-needed accommodation for the clerks, for typing offices and for ministerial rooms ; " Annie's Bar" will in future house the Opposition Whips ; and, above all the new windows, which are to be domestic rather than ecclesiastical. will make the new Chamber infinitely brighter and lighter than the old. That dim, that glaucous, air which rendered the old Chamber so reminiscent of an aquarium will gave place to something more sprightly and less 'opaque. It will be in an atmosphere " of a warm spring day," in an atmosphere of hope and clarity, that wil: be shaped the future of our world.