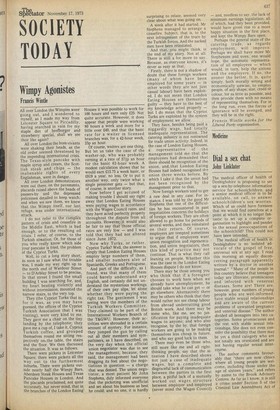 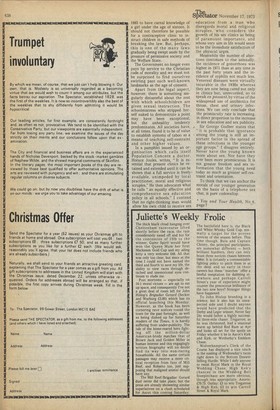 The medical officer of health of Denbighshire is proposing to set up a sex-by-telephone information service for schoolchildren. and a senior medical officer is to be available, on call, to answer schoolchildren's sex worries. Which of us could have foreseen that we would find ourselves at a point at which it is no longer fantastic to set up a complete organisation to highlight and pander to the sexual preoccupations of the schoolchild? This could not have been intended,

The medical officer of health in Denbighshire is no isolated advocate of the gospel of free, universal sex at any age. I read this morning an equally disconcerting paragraph apparently written by a doctor in another journal.* "Many of the people in this country believe that teenagers today are illiterate, promiscuous and infected with venereal. diseases. Some are! There are, however, great numbers of young people who are well-informed,. have stable sexual relationships d rid are aware of the current problems of unwanted pregnancy and venereal disease." The author divided all teenagers into two categories. Some promiscuous and 'the rest with stable sexual relationships. She does not even consider the possibility that there may be yet a third category who are not totally sex orientated and are not having regular sexual intercourse.

The author comments favourably that "there are now clinics where all young people are -wet-come, including those under the age of sixteen years," and refers by name to the Brook Advisory Centres. As far as I know, it is still a crime under Section 5 of the Criminal Law Amendment Act of 1885 to have carnal knowledge of a girl under the age of sixteen. It should not therefore be possible for a contraceptive clinic to instruct children in safe methods of breaking the law. But, perhaps,' this is one of the many laws gradually being swept aside by the pressure of permissive society and the Welfare State.

The Government no longer even pays Ii service to the Christian ,code of morality and we must not be surprised to find ourselves swirling past such well-known ;landmarks as the age of consent. Apart from the legal aspect, however, there is something singularly distasteful about the zest with which schoolchildren are given sexual instruction. The schoolmistress who stripped herself naked to demonstrate a point may have been exceptional, but the unhealthy tendency predominates. All societies have, at all times, found it to be of value to establish systems of taboo as a means of teaching self-restraint and other higher values.

In a pamphlet issued by an organisation which calls itself Population Concern a doctor, Horace Joules, writes, " It is essential that present clinics be retained and extended until it can be shown that a full service is freely. available, unimpeded by local practitioner, moral and religious scruples." He then advocates what he calls "at equally effective and

comprehensive sex education policy in all schools." I contend

that no right-thinking man would allow his own child to receive sex education from a man who disregards moral and religious scruples, who considers the growth of his sex clinics as being of paramount importance, and whose very aim in life would seem to be the immediate satisfaction of the physical urges.

Meanwhile the number of abortions continues to rise annually, the incidence of gonorrhoea was higher in 1971 than at any time in the past forty years and the incidence of syphilis not much less. Venereal diseases were virtually incurable in the 1930s whereas they are now being cured not only in clinics but, unrecorded, so to speak en passant,by virtue of the widespread use of antibiotics for throat, chest and urinary infections. We can only conclude that the promiscuity rate is increasing, in direct proportion to the increase in sex education and sex publicity.

Sir George Godber states that "it is probable that ignorance among the young is still an im. portant factor in the spread of these infections in the younger age groups." I disagree entirely. Never have the young known more about sex. Nor have they ever been more promiscuous. It is not greater freedom and sex information that the young need today so much as greater self-restraint and orientation.

To think that we' Can anchor the morals of our younger generation on the basis of a telephone sex chat, is pure codswallop.