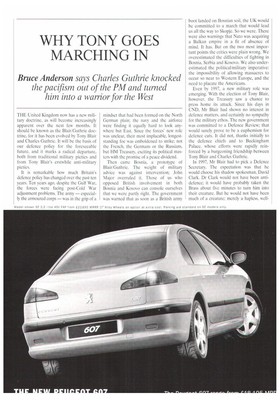 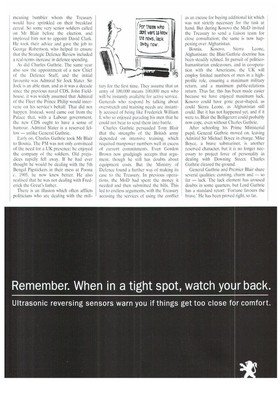 WHY TONY GOES MARCHING IN

him into a warrior for the West

THE United Kingdom now has a new military doctrine, as will become increasingly apparent over the next few months. It should be known as the Blair/Guthrie doctrine, for it has been evolved by Tony Blair and Charles Guthrie. It will be the basis of our defence policy for the foreseeable future, and it marks a radical departure, both from traditional military pieties and from Tony Blair's erstwhile anti-military pieties.

It is remarkable how much Britain's defence policy has changed over the past ten years. Ten years ago, despite the Gulf War, the forces were facing post-Cold War adjustment problems. The army — especially the armoured corps — was in the grip of a mindset that had been formed on the North German plain; the navy and the airforce were finding it equally hard to look anywhere but East. Since the forces' new role was unclear, their most implacable, longeststanding foe was emboldened to strike: not the French. the Germans or the Russians, but HM Treasury, exciting its political masters with the promise of a peace dividend.

Then came Bosnia, a prototype of Blair/Guthrie. The weight of military advice was against intervention; John Major overruled it. Those of us who opposed British involvement in both Bosnia and Kosovo can console ourselves that we were partly right. The government was warned that as soon as a British army boot landed on Bosnian soil, the UK would be committed to a march that would lead us all the way to Skopje. So we were. There were also warnings that Nato was acquiring a Balkan empire in a fit of absence of mind. It has. But on the two most important points the critics were plain wrong. We overestimated the difficulties of fighting in Bosnia, Serbia and Kosovo. We also underestimated the political/military imperative: the impossibility of allowing massacres to occur so near to Western Europe, and the need to placate the Americans.

Even by 1997, a new military role was emerging. With the election of Tony Blair, however, the Treasury saw a chance to press home its attack. Since his days in CND, Mr Blair had shown no interest in defence matters, and certainly no sympathy for the military ethos. The new government was committed to a Defence Review; that would surely prove to be a euphemism for defence cuts. It did not, thanks initially to the defence chiefs and to Buckingham Palace, whose efforts were rapidly reinforced by a burgeoning friendship between Tony Blair and Charles Guthrie.

In 1997, Mr Blair had to pick a Defence Secretary. The expectation was that he would choose his shadow spokesman, David Clark. Dr Clark would not have been antidefence; it would have probably taken the Brass about five minutes to turn him into their creature. But he would not have been much of a creature; merely a hapless, well meaning bumbler whom the Treasury would have sprinkled on their breakfast cereal. So some very senior soldiers called on Mr Blair before the election, and implored him not to appoint David Clark. He took their advice and gave the job to George Robertson, who helped to ensure that the Strategic Defence Review included a real-terms increase in defence spending.

As did Charles Guthrie. The same year also saw the appointment of a new Chief of the Defence Staff, and the initial favourite was Admiral Sir Jock Slater. Sir Jock is an able man, and as it was a decade since the previous naval CDS, John Fieldhouse, it was widely assumed that Admiral of the Fleet the Prince Philip would intervene on his service's behalf. That did not happen. Instead, word came out from the Palace that, with a Labour government, the new CDS ought to have a sense of humour. Admiral Slater is a reserved fellow — unlike General Guthrie.

Early on, Charles Guthrie took Mr Blair to Bosnia. The PM was not only convinced of the need for a UK presence; he enjoyed the company of the soldiers. Old prejudices rapidly fell away. If he had ever thought he would be dealing with the 5th Bengal Pigstickers in their mess at Poona c. 1905, he now knew better. He also realised that he was not dealing with Frederick the Great's father.

There is an illusion which often afflicts politicians who are dealing with the mili tary for the first time. They assume that an army of 100,000 means 100,000 men who will he instantly available for active service. Generals who respond by talking about overstretch and training needs are instantly accused of being like Frederick William 1, who so enjoyed parading his men that he could not bear to send them into battle.

Charles Guthrie persuaded Tony Blair that the strengths of the British army depended on intensive training, which required manpower numbers well in excess of current commitments, Even Gordon Brown now grudgingly accepts that argument, though he still has doubts about equipment costs. But the Ministry of Defence found a further way of making its case to the Treasury. In previous operations, the MoD had spent the money it needed and then submitted the bills. This led to endless arguments, with the Treasury accusing the services of using the conflict

as an excuse for buying additional kit which was not strictly necessary for the task at hand. But during Kosovo the MoD invited the Treasury to send a liaison team for close consultation; the same is now happening over Afghanistan.

Bosnia, Kosovo, Sierra Leone, Afghanistan: the Blair/Guthrie doctrine has been steadily refined. In pursuit of politicohumanitarian endeavours, and in co-operation with the Americans, the UK will employ limited numbers of men in a highprofile role, ensuring a maximum military return, and a maximum public-relations return. Thus far, this has been made easier because we have enjoyed maximum luck. Kosovo could have gone pear-shaped, as could Sierra Leone, as Afghanistan still could. But it has not happened yet, and if it were to, Blair the Belligerent could probably now cope, even without Charles Guthrie.

After schooling his Prime Ministerial pupil, General Guthrie moved on, leaving Admiral Sir Michael Boyce in charge. Mike Boyce, a brave submariner, is another reserved character, but it is no longer necessary to project force of personality in dealing with Downing Street, Charles Guthrie cleared the ground.

General Guthrie and Premier Blair share several qualities: cunning, charm and — so far — luck. The luck element has aroused doubts in some quarters, but Lord Guthrie has a standard retort: 'Fortune favours the brave.' He has been proved right, so far.