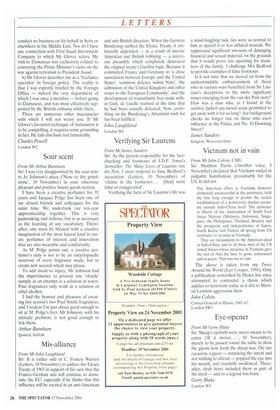 From Mr James Sanders Sir: As the person responsible for the factchecking and footnotes of J.D.F. Jones's Storyteller: The Many Lives of Laurens van der Post, I must respond to Jane Bedford's accusation (Letters, 10 November) of 'claims in the footnotes. . . [that] were false or exaggerated'.

Verifying the facts of Sir Laurens's life was a mind-boggling task; lies were as normal to him as speech is to less inflated mortals. We suppressed significant amounts of damaging financial and sexual material, on the grounds that it would prove too upsetting for members of the family. I challenge Mrs Bedford to provide examples of false footnotes.

Is it not time that we moved on from the understandable embarrassment of those who in various ways benefited from Sir Laurens's deceptions to the more significant issues emerging from the van der Post story? How was a man who, as I found in the archive, lacked any moral sense permitted to get away with it for so long? Are background checks no longer run on those who exert influence in the Palace and No. 10 Downing Street?