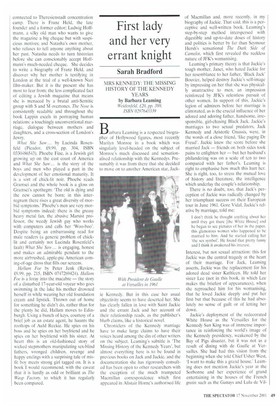 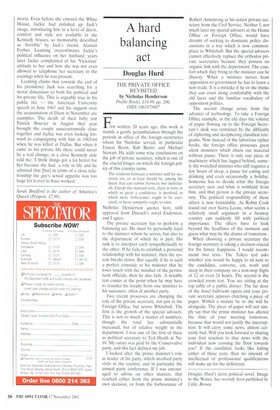 MRS KENNEDY: THE MISSING HISTORY OF THE KENNEDY YEARS by Barbara Learning Weidenfeld, £20, pp. 389, ISBN 0297643339 Barbara Leaming is a respected biographer of Hollywood figures, most recently Marilyn Monroe in a book which was singularly level-headed on the subject of Monroe's much discussed and sensationalised relationship with the Kennedys. Presumably it was from there that she decided to move on to another American star, Jack

ie Kennedy. But in this case her usual objectivity seems to have deserted her. She has clearly fallen in love with Saint Jackie and the errant Jack and her account of their relationship reads, as the publisher's blurb claims, like a historical novel.

Chroniclers of the Kennedy marriage have to make large claims to have their voices heard among the din of other writers on the subject. Learning's subtitle is 'The Missing History of the Kennedy Years', but almost everything here is to be found in previous books on Jack and Jackie, and the documentation she has rigorously consulted has been open to other researchers with the exception of the much trumpeted Macmillan correspondence which first appeared in Alistair Home's authorised life of Macmillan and, more recently, in my biography of Jackie. That said, this is a perceptive and well-written hook. Learning's step-by-step method interspersed with digestible and up-to-date doses of history and politics is better by far than Seymour Hersh's sensational The Dark Side of' Camelot, which first revealed the reckless nature of JFK's womanising.

Learning's primary theory is that Jackie's tough mother, Janet, who hated Jackie for her resemblance to her father, 'Black Jack' Bouvier, helped destroy Jackie's self-image by impressing on her that she was physically unattractive to men, an impression reinforced by JFK's relentless pursuit of other women. In support of this, Jackie's legion of admirers before her marriage is eliminated, as is the crucial influence of her adored and adoring father, handsome, irresponsible, girl-chasing Black Jack. Jackie's marriages to two sexual predators, Jack Kennedy and Aristotle Onassis, were, in the words of a close friend, 'like paging Dr Freud'. Jackie knew the score before she married Jack — friends on both sides took pains to enlighten her — but her husband's philandering was on a scale of ten to two compared with her father's. Learning is right to emphasise how much this hurt her. She is right, too, to stress the mutual love of history and literature, the intelligence which underlay the couple's relationship.

There is no doubt, too, that Jack's perception of Jackie was radically changed by her triumphant success on their European tour in June 1961. Gore Vidal, Jackie's relative by marriage, told me:

I don't think he thought anything about her until they got there [the White House] and he began to see pictures of her in the paper, this glamorous woman who happened to be married to him. And he started calling her the sex symbol'. He found that pretty funny and I think it awakened his interest.

Interest, but not sexual attraction: this for Jackie was the central tragedy at the heart of their marriage. For Jack, Learning asserts, Jackie was the replacement for his adored dead sister Kathleen. He told her sister Lee (not in this book, in which Lee makes the briefest of appearances), when she reproached him for his womanising, that he loved Jackie deeply and put her first but that because of this he had absolutely no sense of guilt or of letting her down.

Jackie's deployment of the redecorated White House as the Versailles for the Kennedy Sun King was of immense importance in reinforcing the world's image of the Kennedy presidency, weakened by the Bay of Pigs disaster, but it was not as a result of dining with de Gaulle at Versailles. She had had this vision from the beginning when she told Chief Usher West, 'I want to make this a grand house.' Learning does not mention Jackie's year at the Sorbonne and her experience of grand entertaining in the houses of the French gratin such as the Ganays and Lulu de Vil

morin. Even before she entered the White House, Jackie had polished up Jack's image, introducing him to a level of decor, comfort and style not available in the Kennedy houses, so memorably described as 'horrible' by Jack's friend, Alastair Forbes. Learning overestimates Jackie's political influence on her husband: years later Jackie complained of his 'Victorian' attitude to her and how she was not even allowed to telephone her secretary in the evenings when he was present.

Learning claims that towards the end of his presidency Jack was searching for a moral dimension to both his political and his private life. This is arguably true in his public life — the American University speech in June 1963 and his anguish over the assassination of Diem in November are examples. The death of their baby son Patrick Bouvier in August that year brought the couple unaccustomedly close together and Jackie was even looking forward to campaigning with him in 1963-64 when he was killed at Dallas. But when it came to his private life there could never be a real change; as a close Kennedy aide told me: 'I think things got a lot better for her because she had a role in life and he admired that [but] in terms of a close relationship the guy's sexual appetite was too large for it ever to have worked.'