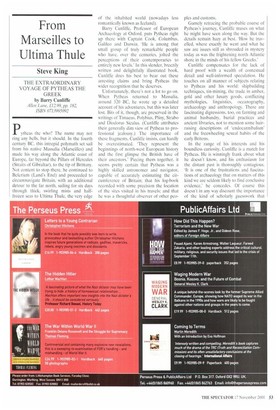 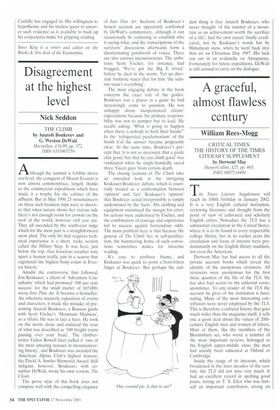 From Marseilles to Ultima Thule

THE EXTRAORDINARY VOYAGE OF PYTHEAS THE GREEK by Barry Cunliffe Allen Lane, U2.99, pp. 182, ISBN 0713995092 Pytheas the who? The name may not ring any bells, but it should. In the fourth century BC, this intrepid polymath set sail from his native Massalia (Marseilles) and made his way along the Atlantic coast of Europe, far beyond the Pillars of Hercules (Straits of Gibraltar), to the tip of Brittany. Not content to stop there, he continued to Belerium (Land's End) and proceeded to circumnavigate Britain, with an additional detour to the far north, sailing for six days through thick, swirling mists and halffrozen seas to Ultima Thule, the very edge

of the inhabited world (nowadays less romantically known as Iceland).

Barry Cunliffe, Professor of European Archaeology at Oxford, puts Pytheas right up there with Captain Cook, Columbus, Galileo and Darwin. 'He is among that small group of truly remarkable people who have, over the centuries, jolted the perceptions of their contemporaries to entirely new levels.' In this slender, breezily written and delightfully illustrated book, Cunliffe does his best to bear out these arresting claims and bring Pytheas the wider recognition that he deserves.

Unfortunately, there's not a lot to go on. When Pytheas returned to Massalia, around 320 BC, he wrote up a detailed account of his adventures, but this was later lost. Bits of it, though, are preserved in the writings of Timaeus, Polybius, Pliny, Strabo and Diodorus Siculus. (Cunliffe attributes their generally dim view of Pytheas to professional jealousy.) The importance of these fragments, Cunliffe insists, can hardly be overestimated. 'They represent the beginnings of north-west European history and the first glimpse the British have of their ancestors.' Piecing them together, it seems pretty certain that Pytheas was a highly skilled astronomer and navigator, capable of accurately estimating the circumference of Britain; that his log-book recorded with some precision the location of the sites visited in his travels; and that he was a thoughtful observer of other peo

Gamely retracing the probable course of Pytheas's journey, Cunliffe muses on what he might have seen along the way. But the details remain hazy at best. 'How he travelled, where exactly he went and what he saw are issues still as shrouded in mystery today as was the frightening north Atlantic shore in the minds of his fellow Greeks.'

Cunliffe compensates for the lack of hard proof with a wealth of contextual detail and well-informed speculation. He touches on all manner of subjects relating to Pytheas and his world: shipbuilding techniques, tin-mining, the trade in amber, gold and other luxury goods, conflicting mythologies, linguistics, oceanography, archaeology and anthropology. There are fascinating digressions, too, on farming and animal husbandry, burial practices and ancient libraries, not to mention some hairraising descriptions of `endocannibalism' and the freewheeling sexual habits of the early Britons.

In the range of his interests and his boundless curiosity. Cunliffe is a match for Pytheas. He is winningly frank about what he doesn't know, and his enthusiasm for the distant past is thoroughly contagious. 'It is one of the frustrations and fascinations of archaeology that on matters of this kind we are seldom likely to find conclusive evidence,' he concedes. Of course this doesn't in any way discount the importance of the kind of scholarly guesswork that Cunliffe has engaged in. His willingness to hypothesise and his tireless quest to uncover such evidence as is available to back up his conjectures make for gripping reading.