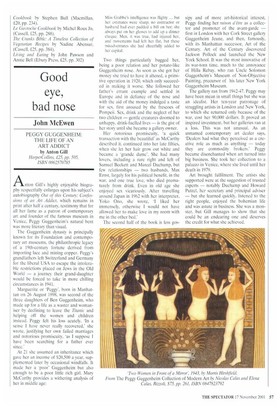 PEGGY GUGGENHEIM: THE LIFE OF AN ART ADDICT by Anton Gill HarperCollins, .E25, pp. 505, ISBN 0002570785 Anton Gill's highly enjoyable biography respectfully enlarges upon his subject's autobiography Out of this Century: Confessions of an Art Addict, which remains in print after half a century, testimony that for all her fame as a patron of contemporary art and founder of the famous museum in Venice, Peggy Guggenheim's natural bent was more literary than visual.

The Guggenheim dynasty is principally known for its Foundation and contemporary art museums, the philanthropic legacy of a 19th-century fortune derived from importing lace and mining copper. Peggy's grandfathers left Switzerland and Germany for the liberal USA to escape the intolerable restrictions placed on Jews in the Old World — a journey their grand-daughter would be forced to take in more chilling circumstances in 1941.

Marguerite or 'Peggy', born in Manhattan on 26 August 1898, was second of the three daughters of Ben Guggenheim, who made up for a life as a waster and womaniser by declining to leave the Titanic and helping off the women and children instead. Peggy felt his loss acutely. 'In a sense I have never really recovered,' she wrote, justifying her own failed marriages and notorious promiscuity, 'as I suppose I have been searching for a father ever since.'

At 21 she assumed an inheritance which gave her an income of $20,500 a year, supplemented later by occasional windfalls. It made her a 'poor' Guggenheim but also enough to be a poor little rich girl. Mary McCarthy provides a withering analysis of her in middle age:

Miss Grabbe's intelligence was flighty but her estimates were sharp; no contractor or husband had ever padded a bill on her; she always put on her glasses to add up a dinner cheque. Men, it was true, had injured her, and movements had left her flat, but these misadventures she had cheerfully added to her capital.

Two things particularly bugged her, being a poor relation and her potato-like Guggenheim nose. As soon as she got her money she tried to have it altered, a primitive operation in 1920, which only succeeded in making it worse. She followed her father's errant example and settled in Europe and in defiance of the nose and with the aid of the money indulged a taste for sex, first aroused by the frescoes of Pompeii. Sex, drink and the neglect of her two children — gentle creatures doomed to unhappy, drink-fuelled lives — is the gist of her story until she became a gallery owner.

Her notorious promiscuity, 'a quick transaction with the beautiful' as McCarthy described it, continued into her late fifties, when she let her hair grow out white and became a 'grande dame'. She had many lovers, including a rare right and left of Samuel Beckett and Marcel Duchamp, but few relationships — two husbands, Max Ernst, largely for his political benefit, in the war, and one true love, who died prematurely from drink. Even in old age she enjoyed sex vicariously. After travelling around Japan in 1962 with her interpreter, Yoko Ono, she wrote, 'I liked her immensely, otherwise I would not have allowed her to make love in my room with me in the other bed,' The second half of the book is less gos

sipy and of more art-historical interest, Peggy finding her raison d'être as a collector and promoter of the avant-garde — first in London with her Cork Street gallery Guggenheim Jeune, and then, famously, with its Manhattan successor, Art of the Century. Art of the Century discovered Jackson Pollock and launched the New York School. It was the most innovative of its war-torn time, much to the annoyance of HiIla Rebay, who ran Uncle Solomon Guggenheim's Museum of Non-Objective Painting, precursor of his later New York Guggenheim Museum.

The gallery ran from 1942-47. Peggy may have been mean in small things but she was an idealist. Her ten-year patronage of struggling artists in London and New York, to which she returned only because of the war, cost her 90,000 dollars. It proved an inspired investment, but her galleries ran at a loss. This was not unusual. As an unnamed contemporary art dealer says, 'Dealers had what they perceived as a creative role as much as anything — today they are commodity brokers.' Peggy became disenchanted when art turned into big business. She took her collection to a palazzo in Venice, where she lived until her death in 1979.

Art brought fulfilment. The artists she supported were at the suggestion of trusted experts — notably Duchamp and Howard Putzel, her secretary and principal adviser — but she learned quickly, listened to the right people, enjoyed the bohemian life and was astute in business. She was a monster, but Gill manages to show that she could be an endearing one and deserves the credit for what she achieved.